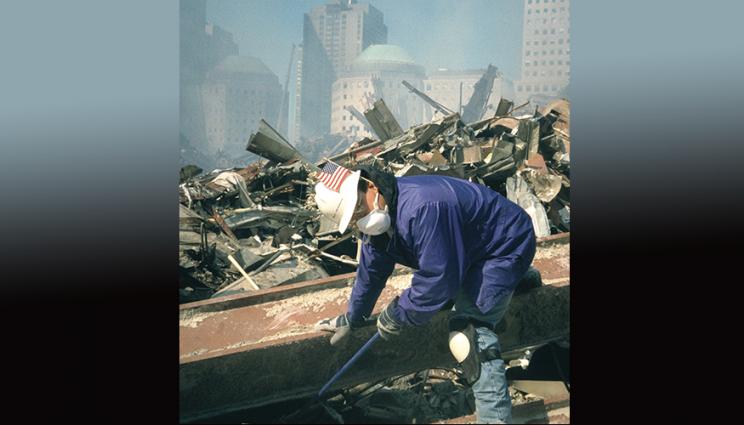 In the wake of the Sept.11 terrorist attacks, a Laboratory team – including engineers, technicians, a physician and a hazards-control expert – rushed to New York City to provide assistance. Lab engineer Mike Newman (now retired) uses micropower impulse radar, a technology invented at LLNL, to search for survivors in the rubble of the collapsed World Trade Center towers.

Editor's note: The following is part of a series of articles looking back at the Lab's response immediately following the Sept. 11 attacks and our contributions since that day 20 years ago.

With the fall of the Berlin Wall in 1989 and the collapse of the Soviet Union in 1991, it was clear that the world was rapidly changing. The visionary creation of NAI positioned the Laboratory to focus its multidisciplinary team science on anticipated future global dangers.

With committed support from across the Lab, NAI was created out of disparate existing organizations and chartered to take on emerging challenges to national and global security. By 1995, NAI had grown into a $100 million program with 400 full-time equivalent employees (FTEs). Like today’s Global Security Principal Directorate (a reconstitution of NAI after the contract transition in 2007), NAI drew funding from multiple government sponsors.

The predominant focus of NAI was concern about nuclear proliferation and the increased threat of nuclear terrorism resulting from the breakup of the Soviet Union. One worry was the potential for theft, smuggling and use of nuclear materials from the former Soviet Union and other unstable areas. LLNL provided analytical and technical support, as well as expert personnel, to address this and other arms control and nonproliferation issues.

In addition, NAI established major initiatives aimed at preventing, reversing and responding to the proliferation or use of chemical and biological weapons. Directed at threats by terrorists and adversarial nations, these efforts led to the technical advances that enabled deployment of the Biological Aerosol Sentry and Information System (BASIS) and BioWatch after the 9/11 tragedy.

Convened in June 1996 by Director of Central Intelligence John Deutch and Deputy Secretary of Energy Charles Curtis, the study group was chaired by R. James Woolsey, former director of Central Intelligence, and Joseph S. Nye, Jr., former assistant secretary of Defense for International Security Affairs. It included retired members from the Department of Defense, Congress, private industry and the intelligence community. The distinguished group examined the potential for terrorist use of WMD against the U.S., assessed national preparedness and made recommendations for enhancing U.S. capabilities to prevent and respond to the threat.

In response to the Livermore Study Group’s conclusion that an end-to-end systematic strategy provides the best defense against WMD terrorism, Shotts restructured NAI into four program areas (divisions) focused on discrete components of the mission space, each with its own activities, core competencies and sponsors. These four divisions leveraged existing projects as well as Laboratory Directed Research and Development (LDRD) and other internal investments to develop new concepts, capabilities and technologies that led to work in new areas of the mission space. Three LDRD Strategic Initiatives pertaining to NAI’s mission were launched in the 1996–2001 timeframe, including one focused on new approaches to biological pathogen detection and another on information operations.

Although the 9/11 attack took the nation by surprise, LLNL had a solid foundation from which to respond to novel terrorist threats. In the decade following 9/11, the Laboratory earned 13 R&D 100 awards for the development of new technologies applicable to counter-WMD terrorism.

When asked to reflect on LLNL’s success in this new mission space, Shotts replied: “NAI was designed from its inception to anticipate and address WMD threats, the consequences of which were (and are) almost beyond comprehension. We brainstormed a full spectrum of scenarios to try and determine how science and technology advances drawn from across the Lab could counter these threats. When the 9/11 attack occurred, we had technological capabilities ‘on the shelf,’ complete with fully thought-out operational concepts that could be plugged into the national response.

“In addition to these technical capabilities, much of NAI’s success was due to ‘people factors.’ We had a compelling mission in which individual effort could make a real difference in averting tragedy and ensuring that no weapon of mass destruction would ever be used,” he added. “We had outstanding and dedicated people with broad technical expertise, interests and vision who could champion key initiatives and bring them to fruition.”

According to Shotts, their external advisory committee was exceptionally well-connected and engaged with them in frequent strategic planning efforts to identify future needs and potential new directions. NAI partnered heavily with other Lab directorates, investing jointly in LDRD to develop a suite of real-time operational capabilities. In addition, they focused on understanding the mission from sponsors’ and customers’ points of view so that the capabilities developed would meet their real-world needs. When Shotts left NAI in 2005, the directorate had grown to more than 800 FTEs with a customer base fairly evenly split among the Department of Energy (DOE)/National Nuclear Security Administration, Department of Defense and the Department of Homeland Security (DHS).

Almost immediately after the 9/11 attacks, President George W. Bush established within the White House the Office of Homeland Security, and later, in 2002, a bill to create the new DHS was signed into law. While at the White House, Parney Albright, who would later become LLNL’s Global Security principal associate director and then Lab director, was asked to lead the formation of DHS’s Science and Technology Directorate.

He worked with DOE to move its chemical, biological, radiological, nuclear and explosives (CBRNE) countermeasures program (and the role LLNL had within it) into DHS to support its counterterrorism mission. Albright also recruited senior LLNL personnel for assignment to Washington, D.C. to help launch and then serve in leadership roles within the new department. As assistant secretary, Albright oversaw the department’s science and technology strategy and its implementation.

Under Albright’s leadership, DHS recognized shortcomings in homeland security capabilities that could be filled by innovations at the national laboratories, and by LLNL in particular. Livermore contributed broadly across the CBRNE threat spectrum and its threat stages: anticipation (with intelligence support), discovery (with detectors and search operational tools), response (with consequence assessment and remediation tools) and attribution (with forensic capabilities). In 2007, the Laboratory peaked in its support to DHS with $120 million in funded work that supported 240 FTEs. The sponsor base for NAI, and now the Global Security PAD, has broadened since then.

“Sept. 11 and the anthrax letters that soon followed highlighted the existence of major gaps in our national capabilities,” Albright said. “I knew from my prior experience that the nation’s reservoir of CBRNE expertise rested within the DOE national labs, and that Lawrence Livermore, often working in partnership with Sandia, far and away had the most mature suite of capabilities, most of them unique.

“Of particular importance was the expertise in biodefense (which later led to DHS’s investment in a Biological Safety Laboratory BSL-3 laboratory at LLNL) and forensics, but also of critical importance was that, as a national laboratory and a federally-funded research and development center, LLNL and its staff were dedicated to the enduring mission of countering the CBRNE threat. I especially appreciated the close working relationship I built with Wayne Shotts over this period,” Albright said.

The Lab’s science and technology foundation and core competencies have grown with the anticipation, recognition and emergence of new and evolving terrorist and other global threats. For example, the Forensic Science Center (FSC), founded in 1991, has significantly enhanced its capabilities, and in 2001, took on responsibilities as an Organisation for the Prohibition of Chemical Weapons (OPCW) accredited laboratory. This certified the FSC for the analysis of samples collected during inspections monitoring compliance with the international Chemical Weapons Convention.

For another example, the National Atmospheric Release Advisory Center (NARAC) has developed truly exceptional capabilities for predicting the consequences of WMD and other hazardous incidents on global to local scales, including in urban areas, as well as for rapidly distributing information to officials and first responders, and attributing sources of releases. Other cutting-edge research capabilities and centers, such as its BSL-3 facility, its High Explosives Applications Facility and its high-performance computing capabilities, have been vital to all areas of LLNL’s counterterrorism work.

Huban A. Gowadia, who now leads the Lab’s Global Security Principal Directorate, noted that the threats the U.S. faces today and will face in the future are science- and technology-driven and require intelligence-informed, innovative science and technology responses.

“As a national security lab with a strong science and technology core, we are well-positioned to anticipate, innovate, prepare and deliver capabilities for wide-ranging missions,” Gowadia said. “This means we must be ever more agile, embrace calculated risk and build and sustain important partnerships to address global security needs. Over the course of our history, we have answered the national call, and we will rise to meet future challenges as well.”

The key to the Laboratory’s success in responding to 9/11, the threat of WMD terrorism and threats to global security has been and continues to be its outstanding staff, able to anticipate and respond to emerging challenges with new ideas, zeal and exceptional multidisciplinary science and technology.

Global Security
"How BASIS grew into the BioWatch system"
"Lab technologies continue to protect the nation against explosives, radiologic…