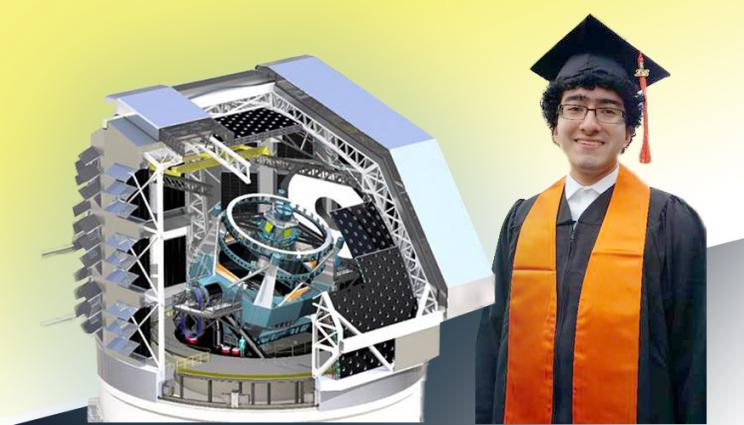 Doctoral student Victor Baules is spending his summer exploring the connection between dark energy and the expansion of our universe, but due to the pandemic, his research fellowship is more down-to-earth, taking place from his home in Alabama.

Baules’ research trajectory in high-energy theory aligns with astrophysics research at Lawrence Livermore National Laboratory (LLNL), where scientists are exploring dark energy — which experts believe is driving cosmic expansion. According to LLNL astrophysicist Michael Schneider, who is one of Baules’ mentors, scientists know very little about dark energy, other than that it exists.

The focus of Baules’ research fellowship is improving the ability to compare various models that seek to characterize dark energy. He is currently predicting the fundamental properties of dark energy that scientists may learn about through the upcoming Vera C. Rubin Observatory survey, expected to start in 2023.

Formerly known as the Large Synoptic Survey Telescope (LSST) project, the Rubin Observatory is located in Chile, high in the Andes Mountains. Funded in part by the U.S. Department of Energy (DOE) and the National Science Foundation, the innovative technology integrates a survey telescope, mirrors, digital camera and data-processing capabilities. Together, they will capture extremely high-resolution images of the visible night sky over 10 years.

LLNL’s research team, led by Schneider, is developing tools needed to analyze the massive number of images that will be captured by the Rubin Observatory, along with data from other astronomical observations. Bob Armstrong and Eddie Schlafly, two other team members, also are mentoring Baules. They are exploring new ways to process astronomical images, improving the ability to distinguish dark energy from atmospheric turbulence and other cosmic characteristics.

While exploring the universe is inspirational, Baules also hopes to use his doctoral degree to inspire future physicists. He is considering pursuing a faculty position at a research institution, where he can continue his research in theoretical and mathematical physics, while teaching and mentoring future physicists.

“My own pathway to enrolling in a doctoral program was somewhat challenging,”  Baules said. “I would like to help create smoother pathways for others, especially students from underrepresented communities.”

As an undergraduate student, Baules thought he had no special aptitude for physics. But through interaction with instructors, along with supportive mentors, he made the decision to pursue a career in physics.

After completing his undergraduate degree, Baules planned to enroll in a bridge program, which would help him boost his background in physics before enrolling in a doctoral program. Those plans changed when the University of Alabama reached out to him and invited him to apply for their doctoral program, which turned out to be a great fit for Baules.

In addition, Baules is a GEM fellow, sponsored by LLNL. The National GEM Consortium is a network of corporations, national laboratories, universities and other research institutions that enables qualified students from underrepresented communities to pursue graduate education in science and engineering.

Recognizing that only a fraction of Latino students choose to pursue science degrees, and even fewer complete those degrees, Baules wants to be part of efforts to expand the diversity of students who earn degrees in physics and other science disciplines.

“I know I will be part of a very small group of Latino physicists who decide to teach at the university level,” he said. “I want to expand mentoring opportunities and outreach to future students, reminding them there are exciting, accessible opportunities in science careers.”

Several of LLNL’s virtual seminars for summer students helped Baules expand his toolkit and enhance his skills. For example, he explored various types of research teams and ways to interact effectively in a collaborative research environment, including how to share updates and recommendations with research advisers and team leaders.

“Victor has a very impressive academic and research background, and we are fortunate to have him join us at LLNL,” said Will Evans, who leads LLNL’s Physics Division. “It is our hope that Victor’s relationship with LLNL persists and grows.”