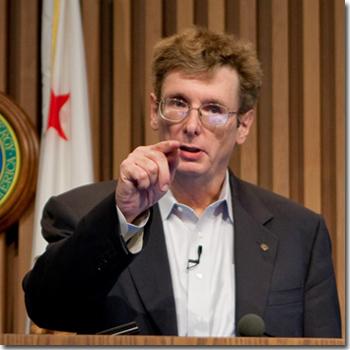 Innovation leads to a world of abundance, not scarcity.

That view was presented to Laboratory employees by Curtis Carlson, the president and CEO of Menlo Park-based SRI International, during his Director's Distinguished Lecturer Series talk last week.

"There are no limits to ideas and creativity," said Carlson, explaining that, "the innovation economy is largely powered by ideas and bits, not just atoms and muscle. We can all innovate. After all, we all have customers or stakeholders."

"Innovation is really the only game in town," Carlson said. "Innovation is the only path for growth, prosperity, environmental sustainability and security."

But, unfortunately, the SRI International CEO believes the United States is not doing a very good job in innovation and that the nation must improve its performance, which he rates as a C-grade.

In the past century, large companies listed on the Standard & Poor's 500 index lasted for anywhere from 70 to 100 years before they disappeared. Now most companies survive for less than 20 years.

Additionally, only one in 10 new consumer products lasts for more than a year, and most university technology transfer programs are largely unsuccessful, Carlson said. And in Silicon Valley, only one out of seven to 10 new companies achieves major success.

In assessing the barriers to innovation, Carlson urged that the United States re-examine its educational, immigration and governmental regulation policies, support manufacturing and lower taxes.

Alluding to his company, which has pioneered the computer mouse, high- definition television and minimally invasive tele-surgery, among other innovations, Carlson took note of what he called a "brutal educational reality."

"At SRI in a given month, it is not unusual that half of our new employees are foreign born. If it were not for our foreign-born researchers, America's growth would stop." China, he added, has more honor students than the United States has students.

With a wry smile, he summarized his immigration policy as: "I would let in all the smart, educated folks I could find...and all the chefs."

Government policies often make it harder to achieve innovation in Carlson's view. He specifically cited the Sarbanes-Oxley legislation, passed by Congress in 2002, that set new or enhanced standards for all U.S. public company boards, management and public accounting firms. Carlson said the measure is a "job-killer if there ever was one."

In the question-and-answer period after his talk, Carlson stated that the country does need manufacturing.

"Solar cells were invented here, but most of the value is going to China. Compared to America, China is buying 41 times more manufacturing equipment for solar cells. Our strategy for innovation is inadequate."

Carlson also took aim at proposals to raise United States' capital gains taxes to 25 percent, contrasting that move with the level of such taxes in Singapore, which are zero.

"The foundations of America are being ripped apart because we aren't thinking about what we're doing to the innovative parts of the economy. We need to wake up. The government needs to adapt to what is happening here and in the rest of the world," Carlson added.

"All of these disciplines must be in place if you want to succeed," Carlson told Lab employees.

"I've never seen a company where failure was the fault of the people or employees. CEOs often erect barriers to innovation," he added.

The creation of new customer value is a continuous process. "Ideas are cheap, a dime a dozen. What is hard is synthesizing them into something of value.

"I ask you to work together to ensure America remains the leader in innovation."