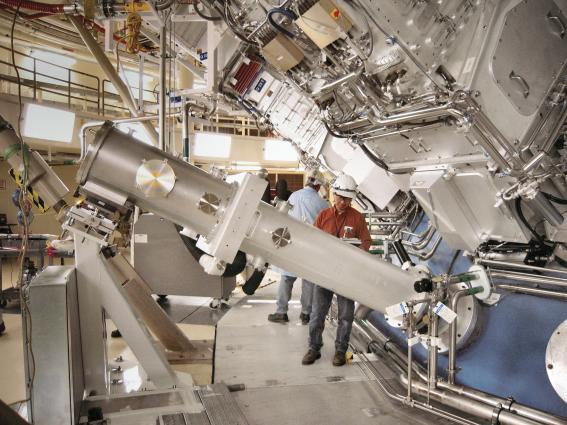 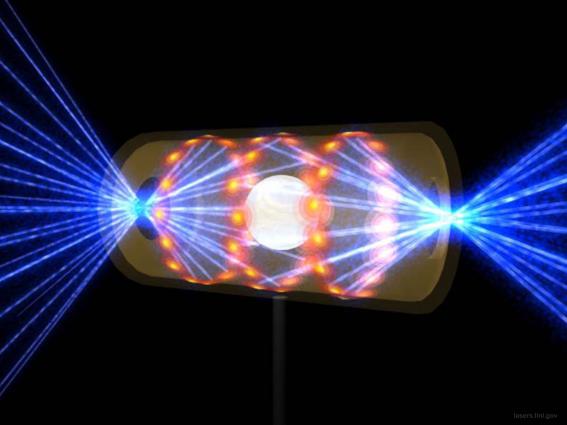 This artist's rendering shows a NIF target pellet (the white ball) inside a hohlraum capsule with laser beams entering through openings on either end. The beams compress and heat the target to the necessary conditions for nuclear fusion to occur. 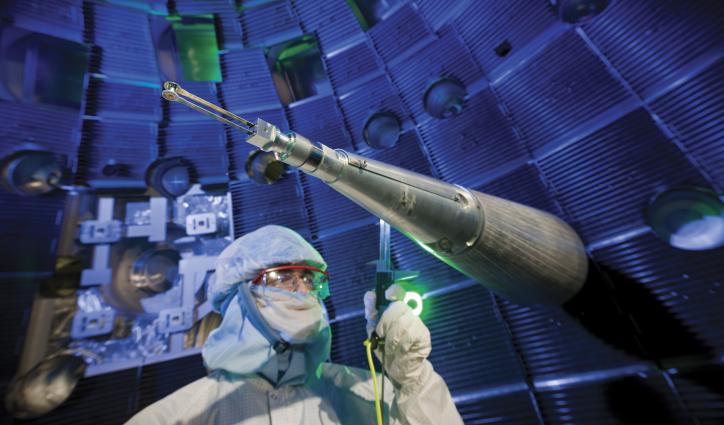 A NIF technician checks the target positioner, which precisely centers the target inside the target chamber before each experiment, and serves as a reference to align the laser beams.

In inertial confinement fusion (ICF) experiments on NIF, the energy of 192 powerful laser beams is fired into a pencil-eraser-sized cylinder called a hohlraum, which contains a tiny spherical target filled with deuterium and tritium, two isotopes of hydrogen. Rocket-like compression of the fuel capsule forces the hydrogen nuclei to combine, or fuse, releasing many times more energy than the laser energy that was required to spark the reaction. Fusion energy is what powers the sun and stars.

The interplay between NIF's high-energy laser beams and the hot plasma in NIF fusion targets, known as laser-plasma interactions, or LPI, has long been regarded as a major challenge in ICF research because of the tendency to scatter the laser beams and dissipate their energy. But during a series of test shots using helium- and hydrogen-filled targets last fall, NIF researchers were able to use LPI effects to their advantage to adjust the energy distribution of NIF's laser beams.

The experiments, described in an article in today's edition of Science Express , the online version of the journal Science , resulted in highly symmetrical compression of simulated fuel capsules – a requirement for NIF to achieve its goal of fusion ignition and energy gain when ignition experiments begin later this year.

Using LPI effects to tune ICF laser energy is "a very elegant way to do it," said Siegfried Glenzer, NIF plasma physics group leader. "You can change the laser wavelengths and get the power where it's needed without increasing the power of individual beams. This way you can make maximum use of all the available laser beam energy."

In the Science Express article, Glenzer, MacGowan and their NIF colleagues reported that "self-generated plasma-optics gratings on either end of the hohlraum tune the laser power distribution in the hohlraum, producing symmetric X-ray drive." Glenzer said the gratings act like tiny prisms, redirecting the energy of some of the laser beams just as a prism splits and redirects sunlight according to its wavelength.

Glenzer attributed the new LPI phenomenon to the size of the test hohlraums, which, while somewhat smaller than actual NIF ignition targets, are two to three times larger than hohlraums used in previous ICF experiments at other laser facilities. He said the increased amount of the high-temperature, low-density plasma in the areas where the laser beams enter the hohlraum was responsible for the spontaneous generation of the plasma gratings.

The technique of slightly shifting the wavelength of some laser beams to control the transfer of energy between the beams and equalize the laser power distribution in the hohlraum had been predicted and modeled by NIF scientists using high-fidelity three-dimensional simulations. In last fall's experiments, an initially asymmetric target implosion with a "pancake" shape was changed to a spherical shape by the wavelength-shifting technique, validating the modeling results.

The NIF laser system began firing all 192 laser beams onto targets in June 2009. In order to characterize the X-ray drive achieved inside the target cylinders as the laser energy is ramped up, these first experiments were conducted at lower laser energies and on smaller targets than will be used for ignition experiments. These targets used cryogenically cooled gas-filled capsules that act as substitutes for the fusion fuel capsules that will be used in the ignition campaign that begins this summer.

Before the wavelength-shifting effects were tested, the only way to adjust the laser energy reaching the walls of the hohlraum, where it is converted into X-rays that heat and ablate the outer surface of the fuel capsule and cause the compression of the fuel inside the capsule, was to adjust the relative energy of the laser beams in the early stages of a shot, during preamplification.

By taking advantage of the LPI effects in the target, as the beams crossed at the entrance of the hohlraums, the scientists could make use of minute wavelength adjustments, ranging from a fraction of an angstrom to a few angstroms (an angstrom is one ten-billionth of a meter, about the size of an atom). With the LPI scheme, "you can run every beam at maximum power and have another distribution mechanism to achieve symmetry," Glenzer said.

The test shots proved NIF's ability to deliver sufficient energy to the hohlraum to reach the radiation temperatures – more than 3 million degrees Centigrade – needed to create the intense bath of X-rays that compress the fuel capsule. When NIF scientists extrapolate the results of the initial experiments to higher-energy shots on full-sized hohlraums, "we feel we will be able to create the necessary hohlraum conditions to drive an implosion to ignition," said Jeff Atherton, director of NIF experiments.

At the end of the experimental campaign, the NIF lasers set a world record by firing more than one megajoule of ultraviolet energy into a hohlraum – more than 30 times the energy previously delivered to a target by any laser system.

"This accomplishment is a major milestone that demonstrates both the power and the reliability of NIF's integrated laser system, the precision targets and the integration of the scientific diagnostics needed to begin ignition experiments," said NIF Director Ed Moses. "NIF has shown that it can consistently deliver the energy required to conduct ignition experiments later this year."

NIF (lasers.llnl.gov), the world's largest laser facility, is the first facility expected to achieve fusion ignition and energy gain in a laboratory setting. NIF is an essential part of the National Nuclear Security Administration's Stockpile Stewardship Program, which ensures the reliability and safety of the nation's nuclear weapons stockpile without live testing. NIF experiments will also be used to conduct astrophysics and basic science research and to develop carbon-free, limitless fusion energy.