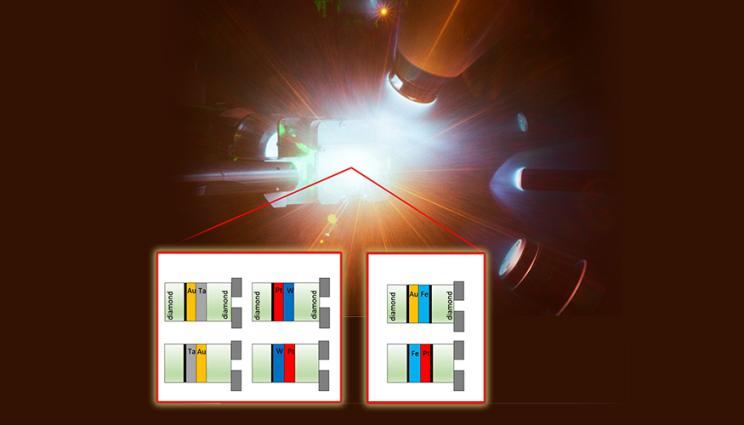 Optical photograph taken during a laser-driven compression and nanosecond X-ray diffraction experiment at the Omega Laser Facility. The inset illustrates the specific target configuration used in this study, where multiple samples were simultaneously compressed along a quasi-isentropic path. Graphic credit: Kowaluk/LLE and Coppari/LLNL.

X-ray diffraction measurements under laser-driven dynamic compression allow researchers to investigate the atomic structure of matter at hundreds of thousands of atmospheres of pressure and temperatures of thousands of degrees, with broad implications for condensed matter physics, planetary science and astronomy.

Pressure determination in these experiments often relies on velocimetry measurements coupled with modeling that requires accurate knowledge of the optical and thermomechanical properties of a window material, resulting in significant systematic uncertainty.

“Ultimately this will improve our understanding of material properties under extreme conditions of pressure and temperature, a strategic area of research at the Laboratory,” said LLNL physicist Federica Coppari, lead author of the study.

In recent years, there has been a widespread surge in the use of dynamic compression to generate extreme conditions of pressure and temperature in the laboratory. Combined with X-ray diffraction measurements, these experiments have enabled unprecedented discoveries with far-reaching implications for planetary science and condensed matter physics. Examples include the long-predicted solid-solid phase transition in magnesium oxide and iron oxide, the existence of the exotic superionic phase of warm dense water ice and the exceptional stability of FC8 diamond up to 2 TPa pressure. In material science, these experiments have been used to document the melting of tantalum at extreme conditions and to characterize the high pressure/high temperature phase transitions in gold.

In the new work, LLNL scientists and collaborators tested the use of in-situ calibrants as a novel approach to pressure determination in X-ray diffraction experiments under dynamic compression. Similarly to the approach used in high-pressure X-ray diffraction measurements with diamond anvil cells, this method relies on using materials whose pressure-density equation of state is well known as pressure gauges.

“By collecting their diffraction patterns in addition to that of the sample under study, one can determine the density and infer the pressure applied to the sample using the previously determined pressure-density relationship,” Coppari said.

Multiple materials (a combination of platinum, tantalum, gold, tungsten and iron) were simultaneously compressed along a quasi-isentropic path to pressures of several hundred GPa (several millions atmosphere) at the Omega Laser Facility at the University of Rochester. The collection of X-ray diffraction patterns from the calibrant and of simultaneous velocimetry measurements allowed the team to not only cross-validate the two methods for pressure determination, but also to establish the use of in-situ calibrants as a viable alternative to Velocity Interferometer System for Any Reflector (VISAR) measurements in dynamic ramp-compression experiments.

Other LLNL authors include Dayne Fratanduono, Marius Millot, Richard Kraus, Amy Lazicki, Ray Smith and Jon Eggert as well as researchers from the Laboratory for Laser Energetics at the University of Rochester. This project also benefitted from the contribution of Eric Folsom, Renee Posadas and Russell Wallace who assisted with target assembly and metrology.