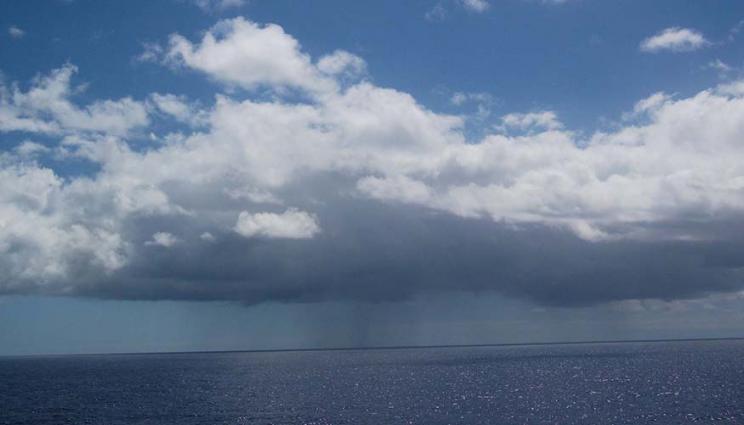 Stratocumulus clouds hover over the ocean and linger for weeks to months.

Large decks of closely spaced stratocumulus clouds hover over the ocean and cover vast areas — literally thousands of miles of the subtropical oceans — and linger for weeks to months.

These marine clouds reflect more solar radiation than the surface of the ocean, providing a cooling effect on the Earth’s surface. Stratocumulus clouds are an important component of the Earth’s radiation balance and are crucial to the earth system models (ESM) used to predict future climate conditions.

In an effort to improve cloud representations in climate models, researchers from Lawrence Livermore and Argonne national laboratories have compared them to observations from the Department of Energy (DOE) Atmospheric Radiation Measurement (ARM) program. The team combined measurements from three different instruments to measure properties of water vapor and drizzle in and below the clouds.

Fast-changing turbulent air motions, or turbulence, are primarily responsible for the lifetime of clouds, and they need to be understood properly and represented in climate models.

Drizzle is constantly present within and below these marine cloud systems. It is a key for achieving more accurate climate forecasts because its presence affects and is affected by turbulence.

“The analysis of the developed dataset allowed us to show that drizzle decreases turbulence below stratocumulus clouds, something that was only shown by model simulations in the past,” said Virendra Ghate, Argonne atmospheric scientist. “The richness of the developed data will allow us to address several fundamental questions regarding drizzle-turbulence interactions in the future.”

The combination of advanced remote sensing observations and large-eddy simulation is a powerful framework to evaluate the physical parameters of large-scale models.

“Given the observed large-scale environment, the E3SM version 1 represents the evolution of clouds and boundary layer structure during the stratocumulus-to-cumulus transition, but doesn’t really realistically capture the effects of drizzle,” Zheng said.

Other Livermore researchers involved in the study include Stephen Klein, Peter Caldwell and Peter Bogenschutz. The research is funded by the DOE Office of Science.