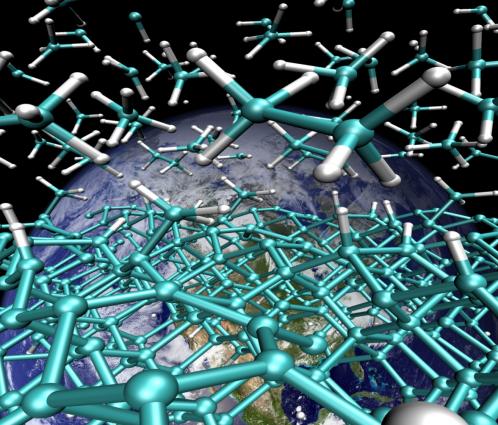 A snapshot taken from a first-principles molecular dynamics simulation of liquid methane in contact with a hydrogen-terminated diamond surface at high temperature and pressure. The spontaneous formation of longer hydrocarbons are readily found during the simulations.

Hydrocarbons in the deep earth

LIVERMORE, Calif. -- A new computational study published in the Proceedings of the National Academy of Sciences reveals how hydrocarbons may be formed from methane in deep Earth at extreme pressures and temperatures.

The thermodynamic and kinetic properties of hydrocarbons at high pressures and temperatures are important for understanding carbon reservoirs and fluxes in Earth.

The work provides a basis for understanding experiments that demonstrated polymerization of methane to form high hydrocarbons and earlier methane forming reactions under pressure.

Hydrocarbons (molecules composed of the elements hydrogen and carbon) are the main building block of crude oil and natural gas. Hydrocarbons contribute to the global carbon cycle (one of the most important cycles of the Earth that allows for carbon to be recycled and reused throughout the biosphere and all of its organisms).

The team includes colleagues at UC Davis, Lawrence Livermore National Laboratory and Shell Projects & Technology. One of the researchers, UC Davis Professor Giulia Galli, is the co-chair of the Deep Carbon Observatory's Physics and Chemistry of Deep Carbon Directorate and former LLNL researcher.

Geologists and geochemists believe that nearly all (more than 99 percent) of the hydrocarbons in commercially produced crude oil and natural gas are formed by the decomposition of the remains of living organisms, which were buried under layers of sediments in the Earth's crust, a region approximately 5-10 miles below the Earth's surface.

But hydrocarbons of purely chemical deep crustal or mantle origin (abiogenic) could occur in some geologic settings, such as rifts or subduction zones said Galli, a senior author on the study.

"Our simulation study shows that methane molecules fuse to form larger hydrocarbon molecules when exposed to the very high temperatures and pressures of the Earth's upper mantle," Galli said. "We don't say that higher hydrocarbons actually occur under the realistic 'dirty' Earth mantle conditions, but we say that the pressures and temperatures alone are right for it to happen.

Galli and colleagues used the Mako computer cluster in Berkeley and computers at Lawrence Livermore to simulate the behavior of carbon and hydrogen atoms at the enormous pressures and temperatures found 40 to 95 miles deep inside the Earth. They used sophisticated techniques based on first principles and the computer software system Qbox, developed at UC Davis and LLNL.

They found that hydrocarbons with multiple carbon atoms can form from methane, (a molecule with only one carbon and four hydrogen atoms) at temperatures greater than 1,500 K (2,240 degrees Fahrenheit) and pressures 50,000 times those at the Earth's surface (conditions found about 70 miles below the surface).

"In the simulation, interactions with metal or carbon surfaces allowed the process to occur faster -- they act as 'catalysts,' " said UC Davis' Leonardo Spanu, the first author of the paper. The research does not address whether hydrocarbons formed deep in the Earth could migrate closer to the surface and contribute to oil or gas deposits. However, the study points to possible microscopic mechanisms of hydrocarbon formation under very high temperatures and pressures. Galli's co-authors on the paper are Spanu; Davide Donadio at the Max Planck Institute in Meinz, Germany; Detlef Hohl at Shell Global Solutions, Houston; and Eric Schwegler of Lawrence Livermore National Laboratory.