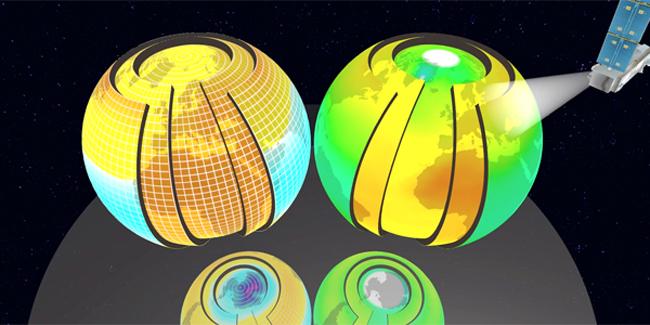 A human-caused climate change signal emerges from the noise

The team looked at geographical patterns of atmospheric temperature change over the period of satellite observations. The team's goal of the study was to determine whether previous findings of a "discernible human influence" on tropospheric and stratospheric temperature were sensitive to current uncertainties in climate models and satellite data.

The troposphere is the lowest portion of earth's atmosphere. The stratosphere sits just above the troposphere, between 6 and 30 miles above earth's surface.

The satellite temperature data sets were produced by three different research groups, and rely on measurements of the microwave emissions of oxygen molecules. Each group made different choices in processing these raw measurements, and in accounting for such complex effects as drifts in satellite orbits and in instrument calibrations.

The new climate model simulations analyzed by the team will form the scientific backbone of the upcoming 5th assessment of the Intergovernmental Panel on Climate Change, which is due out in 2014.

In both satellite observations and the computer model simulations of historical climate change, the lower stratosphere cools markedly over the past 33 years. This cooling is primarily a response to the human-caused depletion of stratospheric ozone. The observations and model simulations also show a common pattern of large-scale warming of the lower troposphere, with largest warming over the Arctic, and muted warming (or even cooling) over Antarctica. Tropospheric warming is mainly driven by human-caused increases in well-mixed greenhouse gases.

"It's very unlikely that purely natural causes can explain these distinctive patterns of temperature change," said Laboratory atmospheric scientist Benjamin Santer, who is lead author of the paper appearing in the Nov. 29 online edition of the journal, Proceedings of the National Academy of Sciences.

"No known mode of natural climate variability can cause sustained, global-scale warming of the troposphere and cooling of the lower stratosphere."

The team analyzed results from climate model simulations with specified historical changes in human and natural external factors, and from simulations with projected 21st century changes in greenhouse gases and anthropogenic aerosols. They also looked at simulations with no changes in external influences on climate, which provide information on the year-to-year and decade-to-decade "noise" of internal climate variability, arising from such natural phenomena as the El Nino/Southern Oscillation and the Pacific Decadal Oscillation.