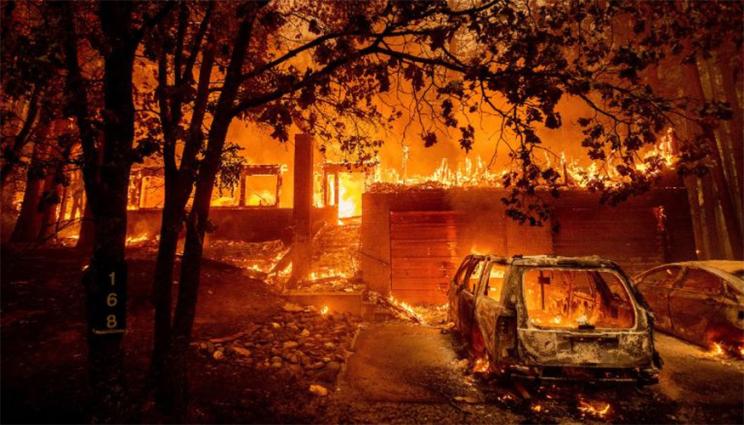 Flames consume a home as the Dixie Fire (California’s largest wildfire) tears through the Indian Falls community in Plumas County.

The western United States has experienced a rapid increase of fire weather as the vapor pressure deficit (VPD) increases in the area during the warm season.

New research by scientists at University of California, Los Angeles (UCLA) and Lawrence Livermore National Laboratory (LLNL) shows that two-thirds (approximately 68 percent) of the increase in VPD is due to human-caused climate change. The research appears in the Proceedings of the National Academy of Sciences.

The western U.S. is prone to large wildfires, with more than 90 percent occurring in the warm season (May-September) according to the Monitoring Trends in Burn Severity (MTBS) database. 2020 was a record-breaking fire season in the history of the western U.S., especially in California, Oregon and Washington. According to the National Interagency Fire Center, the total area burned in these three states reached 8.8 million acres. Recent studies of fire behavior in the western U.S. indicate warm season increases not only in the area burned by fires, but also in fire frequency, fire intensity and fire season length.

In the new research, the team used a flow analogue approach and observations to estimate VPD. The results showed that for the period 1979-2020, natural variables explain an average of only 32 percent of the observed increase in VPD. So what causes the other 68 percent?

“Our analysis indicated that this large contribution to the increase in observed vapor pressure deficit is likely due to human-caused climate change,” said climate scientist Benjamin Santer, who recently retired from LLNL and is now at UCLA. “If mitigation efforts aren’t taken, wildfire activity in the western United States will increase, resulting in significant impact on human lives, human health and the economy.”

Until now, there was little information on whether the increase in wildfire activity was dominated by natural variability or human-caused warming.

While the analysis of the observations indicates that 68 percent of the VPD is likely due to anthropogenic warming, climate model ensembles from the sixth phase of the Coupled Model Intercomparison Project suggest that human-caused warming may account for an even larger fraction of the observed VPD trend (up to 88 percent) for the same period and region.

“Our results suggest that the western U.S. appears to have passed a critical threshold, and the dominant control on the fire weather variation has changed from natural climate variability to anthropogenically caused warming,” said UCLA’s Prof. Rong Fu, who led the study. “The trend toward increasing wildfire risk will likely continue over the western U.S. for decades to come.”

The work was funded by the National Oceanic and Atmospheric administration Drought Task Force Competition and the University of California Laboratory Fees Research Program.