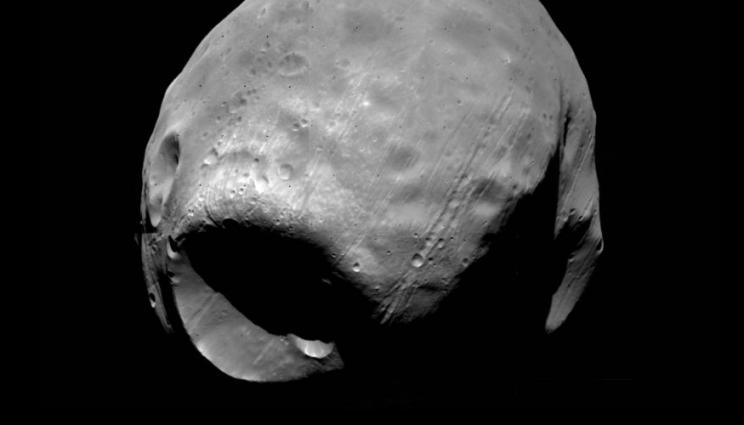 Lawrence Livermore National Laboratory researchers have demonstrated for the first time how an asteroid or comet could have caused the mega crater on Phobos without completely destroying the Martian moon.

How this Martian moon became the 'Death Star'

Mars’ largest moon, Phobos, has captured public imagination and been shrouded in mystery for decades. But numerical simulations recently conducted at Lawrence Livermore National Laboratory (LLNL) have shed some light on the enigmatic satellite.

The dominant feature on the surface of Phobos (22-kilomters across) is Stickney crater (9-km across), a mega crater that spans nearly half the moon. The crater lends Phobos a physical resemblance to the planet-destroying Death Star in the film "Star Wars." But over the decades, understanding the formation of such a massive crater has proven elusive for researchers.

For the first time, physicists at LLNL have demonstrated how an asteroid or comet impact could have created Stickney crater without destroying Phobos completely. The research, which also debunks a theory regarding the moon’s mysterious grooved terrain, was published in Geophysical Review Letters.

"We’ve demonstrated that you can create this crater without destroying the moon if you use the proper porosity and resolution in a 3D simulation," said Megan Bruck Syal, an author on the paper and member of the LLNL planetary defense team. "There aren’t many places with the computational resources to accomplish the resolution study we conducted."

The study showed that there is a range of possible solutions for the size and speed of the impactor, but Syal says one possible scenario is an impact object 250 meters across traveling close to 6 kilometers per second (kps). 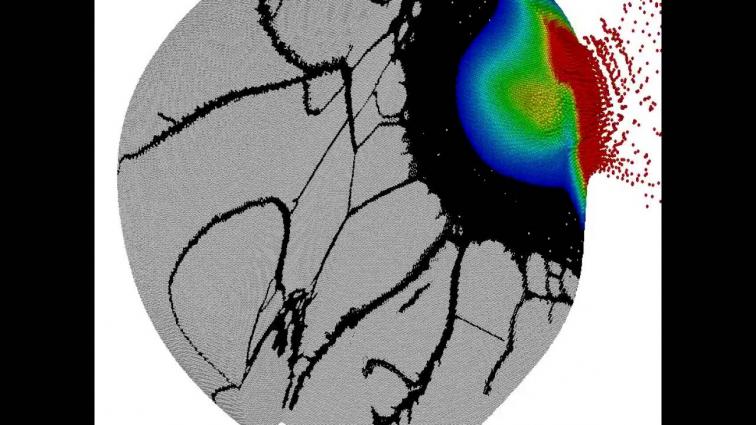 This animation shows one scenario for how the massive crater Stickney could have formed, with a 200-meter object impacting at 8 kps into the 20-km-wide moon. The colored material is moving fast enough to evacuate the forming crater, and the red is moving quickly enough to entirely escape Phobos.

Previous studies used 2D simulations at lower resolutions, and they were ultimately unable to replicate Stickney crater successfully. Additionally, prior studies failed to account for the porosity of the Phobos’ crust in their calculations, critical given that Phobos is less dense than the Martian surface.

While the simulations show how a massive impact could have created Stickney crater, they also appear to disprove a related theory. Some have theorized that the hundreds of parallel grooves that appear to radiate from the crater were caused by the impact. However, the simulations in this study show that fracture patterns in the crust of Phobos would be nothing like the straight, long, parallel grooves. On the other hand, the simulations do support the possibility of slow-rolling boulders mobilized by the impact causing the grooves. But more study would be required to fully test that theory.

The research served as a benchmarking exercise for the LLNL planetary defense team in their use of an open source code developed at LLNL called Spheral. The team uses codes like Spheral to simulate various methods of deflecting potentially hazardous Earth-bound asteroids.

"Something as big and fast as what caused the Stickney crater would have a devastating effect on Earth," Syal said. "If NASA sees a potentially hazardous asteroid coming our way, it will be essential to make sure we’re able to deflect it. We’ll only have one shot at it, and the consequences couldn’t be higher. We do this type of benchmarking research to make sure our codes are right when they will be needed most."

The foundation this research is built upon is decades of investment in LLNL computational capabilities used to ensure the safety, security and effectiveness of the U.S. nuclear deterrent in the absence of nuclear testing – commonly known as stockpile stewardship. This research was also funded in part by the Laboratory Directed Research and Development Program at LLNL.

The study was spearheaded by Jared Rovny, a summer student visiting from Yale University. Other co-authors include LLNL computational physicist Mike Owen, who supported the research by mentoring Rovny and aligning the study to benchmark the Spheral code, and Paul Miller, who leads the planetary defense team at LLNL. Syal conducted followup modeling to confirm the findings and wrote the published paper. She will give a talk on the paper in Pasadena this month during the annual meeting of the American Astronomical Society’s Division of Planetary Science.