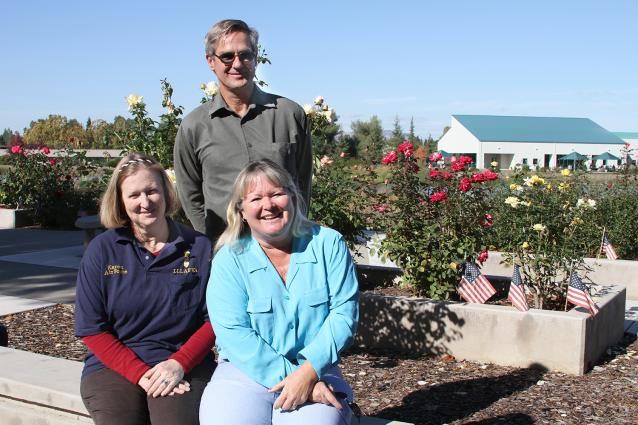 Now that the HOME (Helping Others More Effectively) Campaign is in full swing, Lab employees turn their attention to those in need in the community. Many who require assistance are veterans. Sometimes called the forgotten heroes, these are the men and women who once served proudly in a military uniform, but often return home from their dedicated service only to cope with injuries, disabilities, homelessness or unemployment.

A number of Lab employees give their time and effort to support the events and activities conducted year-round to help veterans -- activities either sponsored by the Lawrence Livermore Laboratory Armed Forces Veterans Association (LLAFVA) or organized by outside agencies. Several such agencies are listed as part of the 2010 HOME Campaign. These agencies work together to foster a dedicated network of resources for U.S. veterans.

Chelle Clements of WCI, B Division, a veteran herself and active board member of the LLAFVA, has long been dedicated to helping improve the lives of veterans, whether through fundraising, promoting the yearly Lab Ride, or serving Veterans Day breakfast to residents at the Livermore Veterans Hospital Convalescent Facility.

"It is the right thing to do," Clements says about her volunteer efforts. "It was not until I was in the Army that I learned about real teamwork, about working together for the survival of the team.  I may no longer be serving in the Army, but I want to help support my team's survival and use what tools I have to help improve their lives."

This year, Clements also was instrumental in placing the Diablo Valley Veterans Foundation on the HOME Campaign's list of agencies.

The primary objective of the Diablo Valley Veterans Foundation is to provide monetary support and assistance through fundraising activities in the community, and other charitable organizations that support veterans, veterans' causes and active duty members of the United States Armed Forces and their families.

The Diablo Valley Veterans Foundation also is the primary fundraising arm for the biennial East Bay Stand Down , a four-day outreach program held at the Alameda County Fairgrounds in Pleasanton.

Stand Down, a "pet project" of the LLAFVA, hosts more than 400 homeless veterans who are honorably discharged and qualify for Veterans Administration benefits, giving them respite from the streets and providing the opportunity for assistance like medical, dental and legal help.

Roy Warner of the LLAFVA said that the association has been involved with the East Bay Stand Down since 1999. "The Stand Down is one of the more personally fulfilling volunteer events we get involved in.You have definite visual verification of your efforts and contributions,"

"You see the personal toll on your fellow veterans' as a result of their military experience and you realize the need to help your comrade."

Karen Ballou, of WCI, B Division, also a LLAFVA board member, volunteered at several Stand Down events with her husband, former Lab employee Harold Schwartz, until his death in 2009.

"This year, I volunteered at East Bay Stand Down in Harold's memory," Ballou said. "What an eye-opener it was," she adds.

Ballou explained how impressive it was to see firsthand the number of veterans who attended to receive the various services offered. "Life on the streets takes an obvious toll on them," she said. "My hat is off to the organizers of East Bay Stand Down. It takes a lot of sweat, volunteers and in-kind donations to make it all happen.  It takes about four volunteers to each veteran to make it work smoothly."

One of the HOME agencies with a focus on returning military is Sentinels of Freedom with a mission to provide life-changing opportunities for men and women of the U.S. Armed Forces who have suffered severe injuries and need the support of grateful communities to realize their dreams.

This group was started by the father of three Army Rangers, Mike Conklin of San Ramon, who was inspired to reach out to severely injured veterans after one of his sons was wounded in Iraq in 2003.

In 2006, with the help of former Lab employee and Sentinels volunteer Marilyn Carter, LLNL sponsored two Sentinels of Freedom soldiers who had been injured in the war in Iraq. They were placed in jobs at the Lab in procurement and dispatch areas.

HomeAid ,  an agency new to the HOME Campaign this year, builds and maintains housing where homeless families and individuals can rebuild their lives. Among those that HomeAid assists are veterans. The agency is working to improve the home of one of the Sentinels of Freedom veterans now at the Lab.

Other HOME Campaign agencies   in support of veterans and the military include: " Fisher House Foundation "  which provides temporary housing near military medical facilities for family members of injured military and   " Operation SAM "    a local Livermore group which sends packages to our troops overseas, mainly in the current areas of conflict.