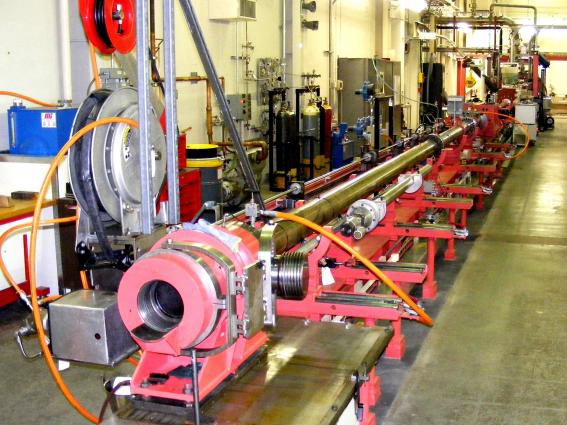 The High Explosives Applications Facility (HEAF) has activated an additional, higher velocity research gun to be used for shock physics research. Such guns are used to study the behavior of materials under sudden high pressure and temperatures.

The new gas gun, which utilizes two stages, can launch a projectile to velocities of 8,000 meters/second. (In comparison, a typical rifle bullet is about 1,000 meters/second.) This gives it the ability to generate precision one-dimensional shock waves up to several millions of atmospheres of pressure.

In a two-stage gas gun, the first stage uses gunpowder and a piston to compress a light drive gas, typically hydrogen, to very high pressures. A rupture disk releases the drive gas into a smaller diameter launch tube, which contains the experimental projectile. The launch tube guides the projectile to the end of the gun where the target chamber contains the target, which connects to diagnostic instruments outside the chamber.

HEAF will also continue to operate its original single-stage powder gun, which is capable of projectile velocities up to 2,500 meters per second. The powder gun can sustain shock pressures under one-dimensional conditions for longer periods of time, but at much lower pressures.

HEAF's new gun has a long history of advancing science in the national interest. In its previous location in LLNL's Bldg. 341, it was used to make fundamental discoveries regarding planetary materials, explosives, metallic hydrogen, water and the very center of the Earth.

It was used as the model for the gun at the JASPER facility at the Nevada National Security Site (formerly known as the Nevada Test Site). JASPER is the acronym for Joint Actinide Shock Physics Experimental Research. (An actinide is one of 15 chemical elements, is radioactive and releases energy when activated through nuclear reactors and nuclear weapons.)

While JASPER carries out its experiments, one of the missions of the HEAF two-stage gun is to prove out experimental methodologies and diagnostics prior to testing actinides at JASPER.

Earlier this month, the Stockpile Stewardship program used the HEAF gas gun to conduct a joint experiment in which Livermore and Los Alamos participated in diagnostics development for upcoming experiments at JASPER.

This new capability expands the already unique national capabilities of HEAF in support of Stockpile Stewardship and the Departments of Defense and Homeland Security.