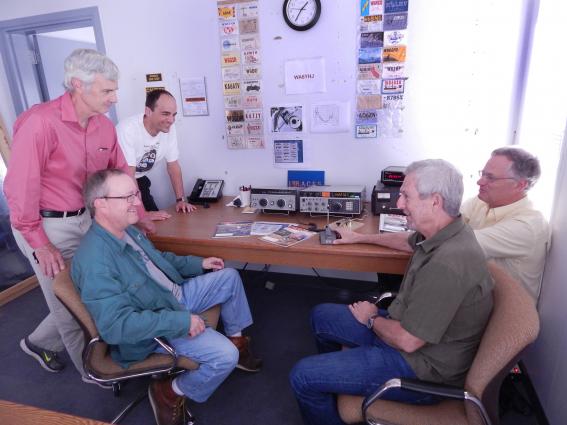 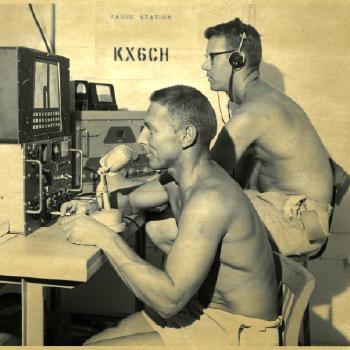 Otto Krause communicating home to his son, Karl Krause, and wife from Operation Hardtack in 1958.

At radio station WA6YHJ, Livermore Radiation Laboratory ham radio operators (from left) Harold Brown and Jim Ruys prepare to switch an incoming message to the telephone hook-up. Communications from the Laboratory were made to the South Pacific in 1958 and 1962 and again to Amchitka in 1969.

Even though Lawrence Livermore National Laboratory's ham radio club has a rich history that dates back to 1950s when nuclear weapons were tested on islands in the middle of the Pacific Ocean, they didn't have their own radio shack in recent years.

That's because their former clubhouse, located in a small metal container outside an engineering lab was removed during the building's renovation nearly a decade ago. Since then, the amateur radio enthusiasts had been searching for a new residence to house their vintage high-frequency radio equipment and conduct meetings.

Their long search finally ended this summer when Lab facilities officials provided them with office space previously used by the Public Affairs Office, across the breezeway from the Lab's Discovery Center. Located just outside of the East Gate entrance, their new digs comprises of three rooms, which club members hope to turn into a small museum, radio operating room and conference room.

"We went from a 10-by-10 foot storage container to what looks really elegant," said Ron Kane, an engineer with the National Security Engineering Division and club organizer who helped secure the location.

A new home means new life for the club, which disbanded during the search, forcing members to pursue their passions at home. Known as the WA6YHJ Amateur Radio Club (that's the Federal Communications Commission's call sign for LLNL), the group is registering with the Livermore Laboratory Employees Services Association to re-formalize as an official club.

WA6YHJ started during the Lab's early days by a group of engineers who really enjoyed using ham radios designed to work on high-frequency bands between 2 MHz to 30 MHz to communicate with other enthusiasts. The radios transmit signals through large antennas that travel hundreds of miles into the ionosphere -- a region of the earth's upper atmosphere -- where it gets refracted down at a substantial distance.

"The signal is skipped around the ionosphere and it bounces off the earth to reach destinations around the world," Kane said.

Besides contacting other ham radio operators in foreign countries as a hobby, the club also helped Lab employees who conducted nuclear tests in the Marshall Islands in the 1950s contact their families back home.

"There were no telephones or communication satellites," Kane said. "The only type of communications for someone stuck on a Pacific island for a month or two was a ham radio."

Lab employees in the Marshall Islands would use a ham radio to connect to a ham radio operator at LLNL, who used hardware to tap into the phone lines to reach their families' homes. And best of all, this long distance phone call from the middle of nowhere was free.

When atmospheric testing ended in the early 1960s, the club focused its efforts on continuing to provide ongoing communication services for the Lab's Emergency Response Organization (ERO). Members participated in annual training exercises for emergencies such as earthquakes, which could take out phone lines and cellular towers. In that case, ham radios would be critical in opening communication channels.

"Our radios are independent of infrastructure," Kane said. "We use point-to-point radios."

In an emergency, ham radio operators are responsible for going to several control points set up in the Lab's area zones and helping coordinate communications from those points with the ERO. They would provide vital information for emergency officials to assess the situation and make critical decisions. Besides training with the Lab, ham operators also train with city and county emergency officials.

Kane is hoping the club's storied history and its new clubhouse will help attract new members from the estimated 80 to 100 ham radio operators at Lawrence Livermore.

He is seeking members of all ages, including a younger generation of ham operators who are not familiar with classic amateur radios. This group uses the modern radios with micro-integrated circuits and sophisticated software that looks more like a computer than a radio.

"The overall quality of the modern radios is better. It's kind of like going from a pinball machine to a fancy video game." Kane said. "But you don't have the nostalgia of playing with the knobs. Instead you move a mouse and type on a keyboard."

He envisions rebuilding a club that embraces all generations of ham radios; wants to continue supporting Lab emergency response capabilities, helps new operators get their ham radio licenses; connects with other operators around the world; participates in contests; and wants to promote their love of ham radios throughout the Lab.

As for his new digs, Kane is going to enjoy every moment of it because he knows it's not going to last forever.

"We'll have about two or three years before we lose our facility due to the construction of the Livermore Valley Open Campus expansion," he said.

After that, club members are hoping that another LLNL facility can be provided for their radio shack.