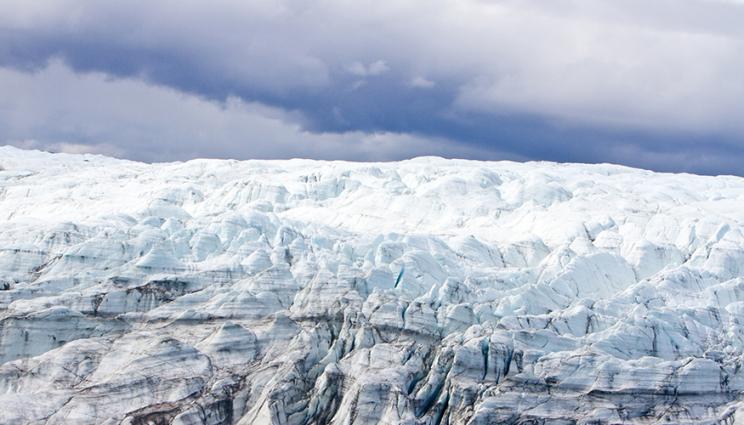 Greenland wasn’t always covered in ice. In fact, within the last 1.1 million years, Greenland had thriving vegetation and ecosystems.

That is the conclusion of an international group of researchers, including a scientist from Lawrence Livermore National Laboratory (LLNL), that analyzed sediment at the base of the Camp Century ice core (1.4 kilometers deep) collected in 1966. The research appears in the Proceedings of the National Academy of Sciences.

Understanding the history of the Greenland Ice Sheet (GrIS) is critical for predicting its response to future warming and contribution to sea level rise. For context, if the GrIS completely melted, sea level would rise by approximately 20 feet.

The team analyzed sub-glacial sediment and rock, retrieved at the base of ice cores, that provides terrestrial evidence for GrIS behavior during the Pleistocene Epoch (2.6 million years ago and lasting until about 11,700 years ago — the most recent ice age).

The sediment, frozen under nearly 1.4 kilometers of ice, contains well-preserved fossil plants and biomolecules sourced from at least two ice-free warm periods in the past few million years.

Enriched stable isotopes in pore ice indicate precipitation at lower elevations, implying the absence of an ice sheet. The similarity of cosmogenic isotope ratios in the upper-most sediment to those measured in bedrock near the center of Greenland suggests that the ice sheet melted and reformed at least once during the past million years.

“The history of the Greenland Ice Sheet and the ecosystems that occupied Greenland during ice-free intervals are poorly known,” said LLNL scientist Alan Hidy, a co-author of the study. “This fragmentary knowledge of Greenland’s climate history limits our understanding of ice-sheet and ecosystem sensitivity to climate warming.”

The Camp Century ice core, collected from the ice-sheet periphery in northwestern Greenland, recovered 3.44 meters of frozen sediment from beneath 1.4 km of glacial ice and silty ice; this is the thickest sub-glacial sedimentary archive recovered so far from a Greenland ice core. The sub-glacial sediment was not studied beyond initial reports of sediment provenance and microfossils, including abundant freshwater diatoms and chrysophyte cysts, pollen and scarce marine fossils, such as diatoms, sponge spicules and dinoflagellates. The basal material remained in frozen storage for decades until it was rediscovered in 2017.

In the new research, the team deciphered the glacial and ecological history of northwestern Greenland using analytical techniques that were unavailable when this unique sediment archive was retrieved more than 50 years ago. Researchers analyzed two samples, respectively from the upper- and lower-most sections of the Camp Century sub-glacial sediment. They found the deposition history and characteristics of the sediment using in situ cosmogenic nuclides, infrared-stimulated luminescence, geochemistry and scanning electron microscopy and energy dispersive X-ray spectroscopy analyses.

LLNL’s Center for Accelerator Mass Spectrometry researchers analyzed cosmogenic 10 beryllium in the sediments, which was a key analysis for determining that the ice was exposed to near-surface cosmogenic radiation sometime within the last 1.1 million years.

“We found that the Camp Century sub-glacial sediment preserves a unique, multi-million-year-old record of glaciation and vegetation,” Hidy said. “These data are consistent with persistent ice cover interrupted by at least two periods of ice-sheet loss and regrowth, once in the Early Pleistocene and another in the past 1.1 million years.”

The research is funded by the Gund Institute for Environment, the National Science Foundation, NASA/GISS and LDEO Belgian FNRS.