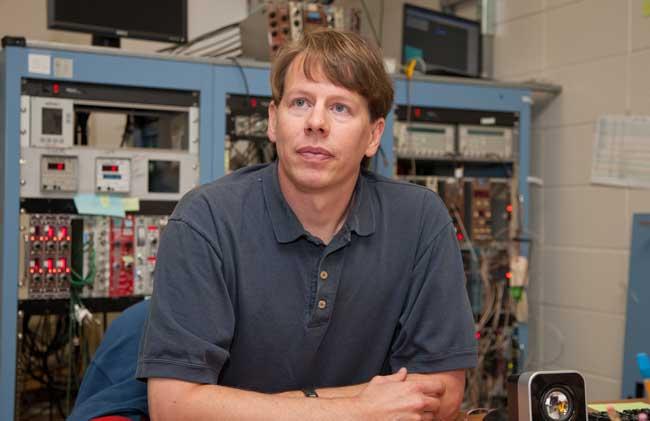 Erik Swanberg explains the electronics (shown in background), which collect and measure data needed for research on thorium-229. Photo by Jacqueline McBride/LLNL

Swanberg, who will earn a Ph.D. in nuclear engineering from UC Berkeley in May, has been conducting research at LLNL for three years. He was recognized by the APS for, "Searching for the Decay and Half Life of the 7.6 eV Excited State in the Thorium-229 Nucleus," which placed first in the graduate student awards Best Experimental Research category.

The study focuses on thorium-229, a radioactive isotope with the lowest known nuclear excited state. The state has been known to exist for 35 years, but its decay to the ground state has never been directly observed. Because it has an extremely low energy for a nuclear state, a unique set of applications are possible, including a nuclear clock, nuclear qubit and possibly a nuclear laser.

Swanberg is a member of the LLNL team currently conducting experiments to observe the decay and measure the half-life of thorium-229. Using uranium-233 alpha decay as the source of thorium-229 excited nuclei and several different methods, the scientists are searching for the half life over a range from nanoseconds to days.

"We are very proud and gratified that Erik has been recognized for his hard work and insights on this project," project leader Jason Burke said. "This effort will shed light on nuclear-atomic coupling processes and potentially enable new technologies."

"Initially started as a Labwide-LDRD, Erik's research is a large step forward in this whole endeavor," Burke added.

Swanberg, originally from Clovis, Calif., said as a youngster he "always loved science."

He attended UC Berkeley for his undergraduate studies and has worked at the Lawrence Hall of Science, designing and maintaining electronic systems used in the exhibits. He also has conducted research at Lawrence Berkeley Lab, and previously worked installing atmospheric monitoring systems as part of the Comprehensive Nuclear-Test-Ban Treaty.

"I enjoy the diversity here at Lawrence Livermore, the environment and I like the people," he says about his time at the Lab. About the APS award, he said: "It's gratifying that other institutions and colleagues are interested in the work that we're doing."

The APS prizes are awarded each year to scientists and students from California and Nevada for the outstanding work performed by their recipients and the groups and institutions they work with.