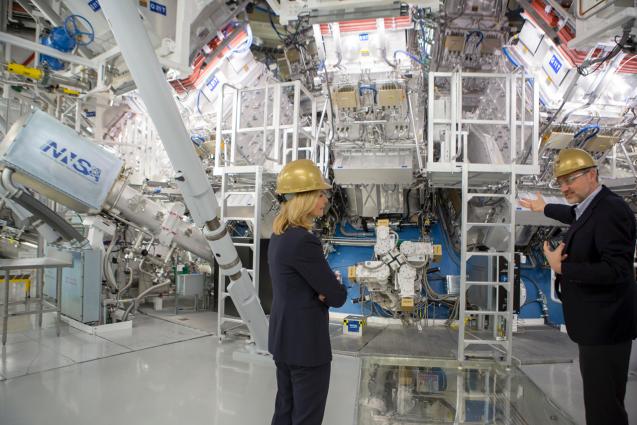 In her first visit to Lawrence Livermore National Laboratory (LLNL) as the DOE under secretary for Nuclear Security and National Nuclear Security Administration (NNSA) chief, Lisa E. Gordon-Hagerty outlined her priorities, including expanding collaborations across the entire Department of Energy/NNSA complex, nuclear nonproliferation, infrastructure improvements and developing the future workforce.

Tuesday’s joint LLNL/Sandia California all-hands meeting was a return of sorts for Gordon-Hagerty, who began her career at LLNL as a health physicist right out of graduate school. While much has changed since her time at Livermore 30 years ago, Gordon-Hagerty said the notion that science and engineering lies at the heart of the NNSA’s national security mission has remained intact. 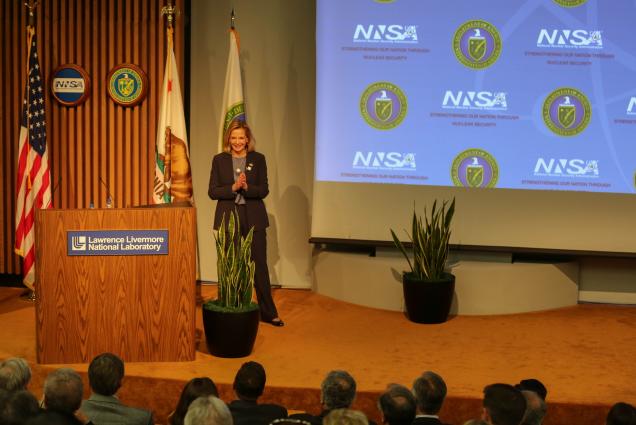 "While we focus on national security, basic science benefits all of the Department of Energy, other departments and agencies throughout the government and our nation," Gordon-Hagerty said. "The developments made at the labs in science-based stockpile stewardship, advanced manufacturing, high performance computing, laser science and optics, bioscience and dozens of other areas don’t just keep our nation safe, they help drive our economy in a highly competitive world."

Gordon-Hagerty is no stranger to national security issues. She served as director of the DOE’s Office of Emergency Response and acting director of the Office of Nuclear Weapons Surety in the 1990s and later became director for combating terrorism at the National Security Council. Before joining the Trump Administration, she held executive positions with private companies focused on combating terrorism and national security issues, according to DOE.

During her tour of LLNL, Gordon-Hagerty visited the National Ignition Facility (NIF), Weapons and Complex Integration (WCI) and National Security Weapons Vault, the High Explosives Applications Facility (HEAF), Superblock and learned about the latest in additive manufacturing and the soon-to-be-completed Advanced Manufacturing Laboratory, which she said would become the "center of this developing field."

"(NIF) is one of the most significant important research facilities in the complex," she said. "Experiments there can now achieve temperatures and pressures previously only attainable in underground nuclear weapon testing, and your work there continues to make progress toward ignition. While I won’t ask you to put a marker down on a date for ignition, I certainly hope I’m there to participate in the celebration. I’m looking forward to that."

Gordon-Hagerty also mentioned the recent agreement signed between NNSA and DOE’s Office of Science to collaborate on advancing exascale computing. The NNSA’s first exascale computer, nicknamed "El Capitan," will be capable of about 50 to 100 times greater performance than the current fastest U.S. supercomputers and is scheduled for deployment at LLNL in 2023.

"Livermore will be the recipient of our side of the equation," Gordon-Hagerty said. "I look forward to leading this campaign as the administrator and making the necessary critical investments to ensure the United States remains at the top of our game in high-performance computing."

Gordon-Hagerty named nuclear nonproliferation, counterterrorism, nuclear propulsion and emerging infrastructure projects aimed at updating the labs’ existing capabilities among her priorities as NNSA administrator. She mentioned LLNL projects including electrical upgrades in Bldg. 453 to prepare for exascale computing, and modernization of Site 300, consisting of improvements to the indoor Contained Firing Facility (CFF) and the Engineering Test Facility. She also encouraged utilizing the newly raised budget threshold of $20 million under the National Defense Authorization Act for minor capital improvements.

"Prioritizing our infrastructure as the (Nuclear Posture Review) did offers tangible evidence to both allies and potential adversaries of the capabilities of U.S. nuclear weapons and can help to deter and assure, hedge against adverse developments and discourage adversarial interest in arms competition," she said.

Gordon-Hagerty stressed the importance of the NNSA’s primary national security mission, emphasizing that "people are our number one asset." She spoke of the need to recruit young and early career scientists and engineers, highlighting the Minority Servicing Institution Partnership Program (MSIPP) and other educational outreach efforts. Investing in fresh talent is imperative, she said, to making nuclear security "flexible and responsive" and maintaining the "intellectual background of scientific and technical expertise." 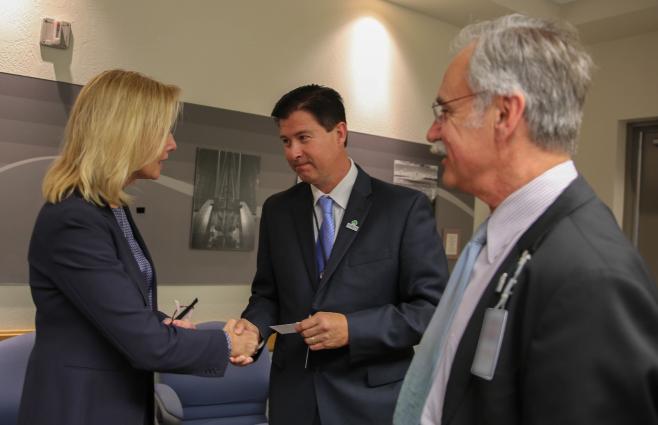 "We recognize that we face an aging workforce and challenges with recruiting the best and brightest," Gordon-Hagerty said. "Yet rest assured, one of my highest priorities at NNSA is to execute a well thought out, systematic approach so we will get the right people, with the right skillset, in the right positions."

Noting LLNL and Sandia’s collaborative work on the W80-4 Life Extension Program (LEP), the Exascale Computing Project and other large-scale efforts, Gordon-Hagerty made teamwork across the entire NNSA complex the theme of her talk, underscoring the importance of leveraging the wealth of capabilities at NNSA headquarters, its field offices and laboratories to advance science and address national security challenges.

The theme of teamwork extended to the Lab with the nomination of WCI Principal Associate Director Charlie Verdon to the post of deputy administrator for Defense Programs at NNSA.

"I can’t think of a more respected and qualified leader to assist us in laying the foundation for, and beginning the execution of, our future nuclear security enterprise for decades to come," Gordon-Hagerty said, adding she was "grateful" for the opportunity to add Verdon to her inner circle.

"The challenges we face as a nation are real and pressing. We positively affect our nation’s security only by pulling together, working together and showing our best selves as a team," Gordon-Hagerty said. "Simply put, under my leadership, there is no us and them."

Gordon-Hagerty concluded by applauding LLNL and Sandia for their community outreach efforts, through programs such as Girls Who Code, Family Science Nights, school science fairs and teacher training, as well as the extracurricular and volunteer work by Lab employees to inspire the next generation of scientists.

"All of your work contributes mightily to America’s security as well as that of our allies and our friends. For this, and for so much more, I am extremely grateful," Gordon-Hagerty said. "Your spirit and enthusiasm are truly what makes this community and what makes the NNSA family a special place at which to work."