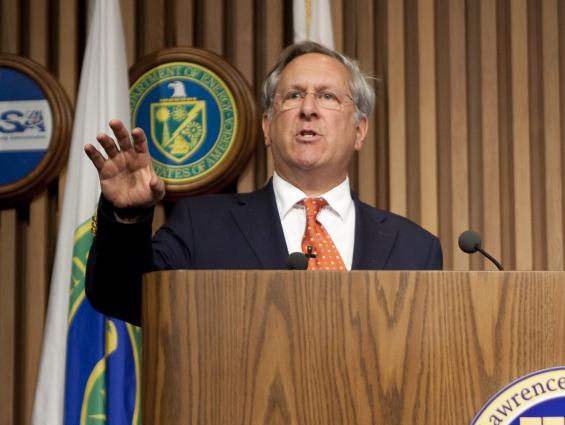 Gorbachev and the end of the Cold War

This was one of many intriguing observations made last week by David Hoffman, Washington Post contributing editor and author of "The Dead Hand: The Untold Story of the Cold War Arms Race and its Dangerous Legacy" (2010 Pulitzer Prize for nonfiction). In a talk sponsored by the Global Security Principal Directorate, Hoffman shared some of the insights he uncovered in his research for "The Dead Hand."

In addition to information gathered during his years covering the White House during the Reagan presidency and as Moscow bureau chief, together with interviews, memoirs, diaries, news accounts and archival materials (the usual trove of historians and biographers), Hoffman also had access to a unique source of material -- a collection of internal documents from the Defense Department of the Central Committee of the Communist Party of the Soviet Union.

The papers were collected by Vitaly Katayev, a Soviet aviation and rocket designer by training who spent almost two decades as a staffer on the Central Committee. Katayev was an inveterate note-taker, writing meticulous entries into his journals and preserving more than 10,000 pages of original documents on the Cold War arms race. These documents provide, for the first time, a direct line of sight into the thinking and decision-making in the Kremlin from 1974 to the collapse of the Soviet Union in 1991.

Of particular interest to Hoffman, the Katayev papers revealed new and telling information about the Soviet reaction to the U.S. Strategic Defense Initiative (SDI) and their illicit biological weapons program.

Contrary to the popular belief that the USSR's response to SDI bankrupted the Soviet Union, Gorbachev deliberately chose not to counter the U.S. initiative.

As Hoffman explained, Soviet scientists had studied the technical feasibility of a space-based-laser missile defense system, but concluded that the necessary science and engineering was 20 years away. "They were completely flummoxed by SDI," said Hoffman. "They didn't think SDI would work, so why was the U.S. -- which was usually so practical -- spending such enormous sums on it?" Within weeks of taking office, Gorbachev received a proposal to build a Soviet Star Wars system. The directors, designers and builders of satellites, space boosters, radars, and lasers cobbled together all of the activities in the field -- Kateyev tallied 137 projects in the design and testing phase, 34 projects in the scientific research phase and 115 in fundamental science -- into a massive program that would have provided the military-industrial complex with vast new subsidies for years to come.

Gorbachev put the plan into his bottom drawer. "He didn't want an arms race in space," Hoffman said.

A plan also was presented to Gorbachev to counter SCI with an asymmetric response -- putting 38 warheads on every SS-18 ICBM (rather than 10 under the existing treaty) -- to overwhelm the U.S. missile shield. He decided not to pursue this option either.

"Gorbachev didn't terminate these programs outright. Instead, he let them die under their own weight."

According to Hoffman, Gorbachev's early years did not foreshadow what would come later. "He was a child of the Soviet system. But all the years he was rising through the Soviet bureaucracy, he saw the enormous defense burden on the country. He saw that something was wrong with the way the Soviet Union was functioning." Gorbachev declined to up the ante in the arms race for practical and economic -- not idealistic -- reasons.

Reagan, on the other hand, Hoffman said, was a "romantic" in his quest to abolish nuclear weapons. Although in 1980 he campaigned on a very hawkish position, after he became president and saw first-hand the country's preparations for nuclear war, Reagan grew deeply troubled by the specter of nuclear Armageddon. He deplored the MAD (mutual assured destruction) approach to deterrence and saw SDI as a way to make it possible to eliminate nuclear weapons altogether.

Unfortunately, tensions between the United States and Soviet Union were at high tide during the 1980s, what with the invasion of Afghanistan and the downing of the Korean airliner by the Soviets and the deployment of nuclear-armed Pershing missiles in Europe by the U.S. "The Soviets, and the KGB in particular, were afraid of underestimating the U.S. threat, so they overestimated it. And the U.S. did the same with regard to the Soviets," observed Hoffman. In retrospect, the times were extremely perilous, and it was fortunate for the world that Gorbachev, and not his immediate predecessors, was the Soviet head of state.

Given his restraint with regard to SDI and nuclear weapons, Gorbachev's actions related to the Soviet's illicit germ weapons program are puzzling, noted Hoffman.

When Gorbachev came to power in 1985, the Soviet Union had an extensive biological weapons program initiated by Brezhnev, despite being a signatory of the Biological Weapons Convention. In addition to anthrax, the Soviets also were working on smallpox, plague and tularemia, but their intentions and targets for such weapons are not clear.

"Kateyev's papers showed there were multiple Central Committee resolutions about the biowarfare program issued in the mid- to late-80s. It's hard to believe these were all signed and issued without Gorbachev's knowledge," Hoffman said.

"There's even a May 1990 memo to Gorbachev about the biological weapons program -- a memo that still didn't tell the whole story. The Soviets misled the world and they misled their own leaders.

"He clearly knew about the biowarfare program, and he actively participated in its coverup," Hoffman said. When questioned by British Prime Minister Margaret Thatcher in 1990, he replied, "Apparently we have facilities working in this field, but not quite in this direction." When U.S. Secretary of State James Baker asserted in 1991 that the Soviet's had "a colossal Soviet biological warfare program," Gorbachev countered, "Maybe all this is fantasy?"

So why did Gorbachev work so hard to halt the nuclear arms race but tolerated and even covered up the Soviet bioweapons program?

Hoffman offers several possibilities. "Perhaps he didn't know the full scope of the program, but I find that hard to believe. Perhaps he wanted a military strategic reserve, something in his back pocket to counter SDI. I think it's more likely that he had to pick his battles, that he thought it far more important to fight the nuclear arms race."

Gorbachev was awarded the Nobel Peace Prize in 1990. Yet despite his enormous impact in bringing the Cold War to a close, Hoffman noted that Gorbachev is almost a nonentity in his own country.

Katayev died in 2001. His papers are deposited at the Hoover Institution Library and Archives at Stanford University.