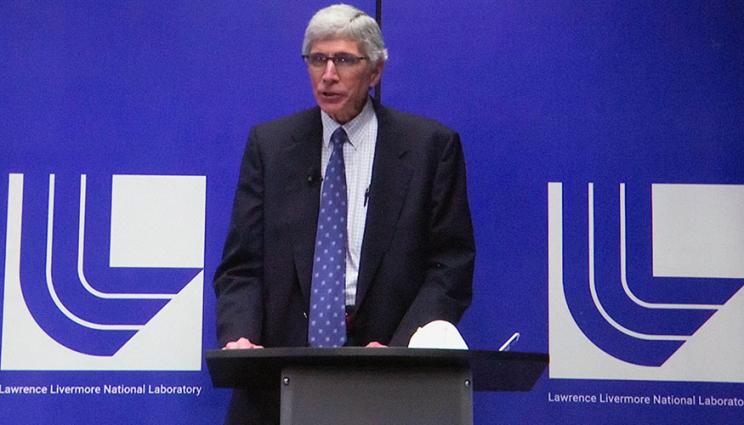 Outgoing director of Lawrence Livermore National Laboratory (LLNL) Bill Goldstein has received honors from the Department of Energy (DOE) and the National Nuclear Security Administration (NNSA) in recognition of his significant accomplishments as a scientist, leader in national security and director of LLNL. Goldstein retired March 1 after more than 36 years at LLNL and seven years as its director.

In a virtual ceremony, then-acting Secretary of Energy David Huizenga conferred the Secretary’s Exceptional Service Award to Goldstein in recognition of his “dedication and service to the National Nuclear Security Administration, the Department of Energy and the nation.”

The Secretary’s Exceptional Service Award is given in recognition of outstanding and unique accomplishment and leadership that exemplifies the highest standards of and dedication to public service and significantly benefits DOE and the nation.

“For almost seven decades, Livermore has developed and applied world-class science, technology and engineering to ensure the safety and reliability of the U.S. nuclear deterrent, which underpins our national security. Livermore also has applied science, technology and engineering to confront dangers ranging from nuclear proliferation to terrorism as well as providing breakthroughs for defense and intelligence,” Huizenga said. “Few people have embodied and sustained this tradition of innovation and service to our national security as brilliantly as Bill Goldstein.”

Acting NNSA Administrator Charles Verdon presented Goldstein with the Administrator’s Distinguished Service Gold Award in recognition of his “leadership and exceptional service as director of Lawrence Livermore National Laboratory.” The citation notes that Goldstein’s “proud legacy of contributions to the national security of the United States has had great impact and will endure for decades to come.”

The Administrator’s Distinguished Service Gold Award recognizes consistently outstanding leadership accomplished over an extended period of time, and is the highest honorary award presented by NNSA.

“On behalf of NNSA, we thank Bill for his three and a half decades of service and leadership at Lawrence Livermore National Laboratory,” Verdon said. “His contributions as a scientist have been extensive and important, and beyond the demonstrated prowess as a scientist, those of us that worked with him saw and admired the passion he has for the Laboratory, its people and the important role the Laboratory plays in support of the nation’s security.”

After joining LLNL as a theoretical physicist in 1985, Goldstein worked on diverse national security and science programs before taking on roles of increasing responsibility in senior management, including serving as the associate director of Physical and Life Sciences and the deputy director for Science and Technology.

During his tenure, the Lab was named the lead in two critical life extension programs; acquired several of the world’s fastest supercomputers, including the exascale-capable El Capitan; became a leader in additive manufacturing; developed and constructed the High-Repetition-Rate Advanced Petawatt Laser System (HAPLS, the world’s most advanced and highest average power diode-pumped laser); provided the optical assemblies, one of them the world largest optical lens ever assembled, for the Large Synoptic Survey Telescope now the Vera C. Rubin Observatory); and published “Getting to Neutral,” a groundbreaking study on how California could achieve carbon neutrality. Research on the National Ignition Facility, the world’s most energetic laser, also made significant progress toward fusion ignition while providing insight into stockpile science that could not be achieved through previous weapons testing.

“I have been privileged to represent the people of this Laboratory, who are owed so much for these accomplishments. It is the character, talent and culture of the Lab and its people who have made possible everything that I have taken such pride in over the last seven years,” Goldstein said. “I cannot imagine having been more fortunate in the opportunity I was given to serve or luckier in the nature of the institution that I was vouchsafed to lead.”