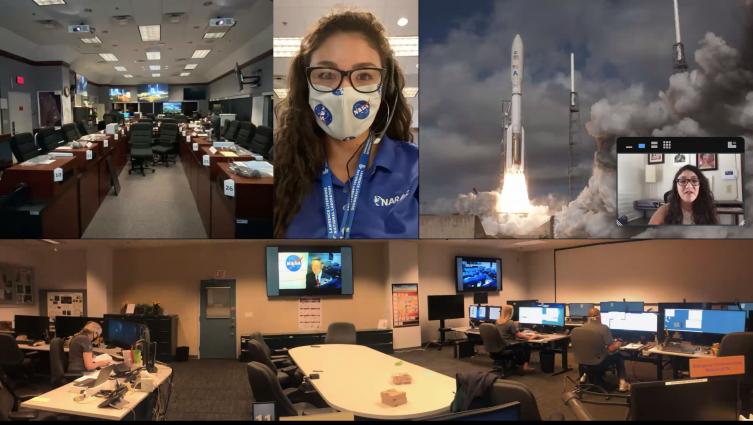 Jessica Osuna, an atmospheric scientist at LLNL’s National Atmospheric Release Advisory Center, served as keynote speaker at Expanding Your Horizons. Osuna shared her path from working in the cornfields during middle school to working with NASA and the U.S. Air Force on the Mars 2020 Perseverance Rover launch.

More than 150 girls logged into their computers, excited to participate in the first-ever virtual San Joaquin Expanding Your Horizons (SJEYH) conference via Zoom last month.

Now in its 28th year, SJEYH has a long history of inspiring young women and fostering awareness of careers in science, technology, engineering and math (STEM). The annual event normally draws more than 500 girls to the University of the Pacific in Stockton for a day filled with hands-on workshops and activities. However, due to large gathering restrictions brought on by COVID-19, SJEYH shifted gears to coordinate a full-scale virtual conference.

“Nothing beats the thrill we all feel with hundreds of girls together in person, excited about STEM and learning,” said Jeene Villanueva, LLNL computer scientist and SJEYH co-chair. “When an in-person event was no longer a possibility, we knew the show must go on and we had to do something. Planning a virtual conference was new to all of us, however, we all came together to make it happen.”

The theme this year, “Perseverance Can Take You to Mars,” paid tribute to keynote speaker Jessica Osuna, an atmospheric scientist at LLNL’s National Atmospheric Release Advisory Center. Osuna shared her path from working in the cornfields during middle school to her once-in-a-lifetime experience working with NASA and the U.S. Air Force on the Mars 2020 Perseverance Rover launch in July. Osuna encouraged the young women to make themselves uncomfortable and not be afraid of failure. “Fall forward as you continue to persevere on your own path, no matter what obstacles you may encounter,” she said.

She told of the times that may have felt like she failed because her goals changed, but she remained confident in her dedication to a career in STEM and relied upon her network. She encouraged the girls to similarly remember that they can do anything they set their mind to. “If you stay true to yourself and continue falling forward while persevering on your own path, you too will go far and maybe even to Mars,” Osuna said.

The virtual conference followed a model similar to the typical in-person event and included an opening ceremony with Osuna as the keynote speaker, a puzzle activity completed over lunch and each student participating in two out of five possible workshops. The STEM-based workshops included: Coding and Design by Sophie Quynn; The Magic of STEM by John Gyllenhaal; Learning From Earth’s Climate to Grow Food on Mars by Stephen Po-Chedley; Ice Cream, Chemicals and Wells, Oh My! by Monique Warren; and Egg Drop by Garrett Wong.

Riley Souza, an eighth grader at Stella Brockman School and third-year attendee, said the virtual SJEYH event was fun and entertaining. “I liked being able to see everyone on my screen. My favorite part was doing all the experiments. I learned a lot about aquifers using Oreos and ice cream in one of the experiments,” she said. Souza hopes to be a computer coder someday and thinks that SJEYH is important because “it helps me grow and get more involved.”

Souza’s classmate Sarah Thomas participated alongside her and thought the SJEYH was organized and well planned as a virtual event. “My favorite part of SJEYH was that we still got to do experiments, even thought we were all somewhere different. SJEYH teaches girls new things while having fun. One thing new I learned is that sun is a UV light,” Thomas said.

At the conclusion of the conference, names were randomly drawn of those who completed the lunchtime puzzle activity. Prizes included Mars Rover solar-powered model kits and gift cards. All attendees received T-shirts and supplies prior to the conference at a special drive-thru pick-up held at the University of the Pacific in Stockton.

SJEYH, now affiliated with Techbridge Girls, is co-sponsored by Lawrence Livermore National Laboratory (LLNL), Sandia National Laboratories/CA and the University of the Pacific School of Engineering and Computer Science.

The conference is coordinated by a core committee (SJEYH board) of volunteers comprised of co-chairs Villanueva and Kina Kincher-Winoto (SNL/CA), along with Candice Bila, Jenessa Dozhier, Marleen Emig, Cary Gellner, Sharon Langman, Carrie Martin, Tera Moore, Patricia Lopez and Teri York, with the help of additional volunteers who work at LLNL and Sandia National Laboratories and the University of the Pacific, as well as various members of the community. More than 30 volunteers assisted with the virtual event as presenters, assistants and Zoom room monitors.

“The appreciation we received for ‘persevering’ with all the planning and preparation that went into the virtual SJEYH made it all worthwhile,” Villanueva said.” It was an exciting day, and the end result was even better than we expected.”

LLNL partners with city of Livermore to reduce carbon emissions