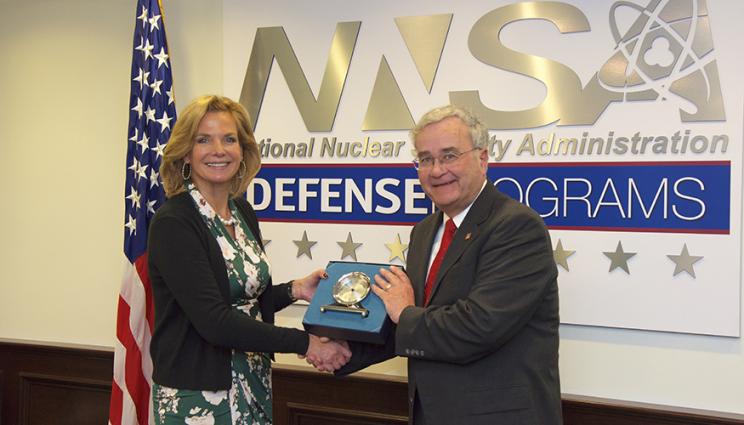 In recognition of more than 40 years of service to the U.S. Air Force, Department of Energy and National Nuclear Security Administration, Tom Gioconda has been awarded the NNSA Administrator’s Gold Medal.

Gioconda, who recently stepped down as deputy director of the Lab, received his award from NNSA Administrator Lisa E. Gordon-Hagerty in early December in Washington, D.C. The Gold Award is the highest recognition bestowed by NNSA. During the ceremony, Gioconda also was presented with the Secretary of Energy’s Exceptional Service Departure Award.

Gioconda was cited not only for his years of service to DOE, NNSA and the Air Force but for “his outstanding impact to the Laboratory…His contributions are worthy of the Administrator’s Gold Medal Award.”

“He has demonstrated the highest standard of commitment to public service throughout his career and significantly advanced the missions of NNSA,” Gordon-Hagerty said.

Gioconda’s first contributions to DOE/NNSA came as a result of his posting as the senior military officer assigned to DOE in 1997. He served in a number of roles, including acting deputy administrator for Defense Programs and principal deputy assistant administrator for military application, where he provided oversight for all defense programs within the DOE. One of his key accomplishments during this time was the stand-up of the newly created NNSA. He left DOE/NNSA when he retired in 2001 as a brigadier general after a distinguished 31-year career in the Air Force.

After leaving the Air Force, Gioconda returned to support the DOE/NNSA mission through his work as a principal vice president with Bechtel National Inc. He served as the contract transition manager for both Los Alamos National Laboratory (2006) and Lawrence Livermore.

In 2010, he was selected as deputy director for LLNL. As deputy director he  oversaw key institutional priorities, including ensuring safe and successful Lab operations, management of vital infrastructure and promoting business and operational efficiencies. He was a strong advocate for the Lab workforce, supporting employee engagement, leadership development programs, resource groups and work-life balance activities.

Gioconda stepped down from his role as deputy director of the Lab on Nov. 1, after nine years  of service, and has returned to Bechtel.