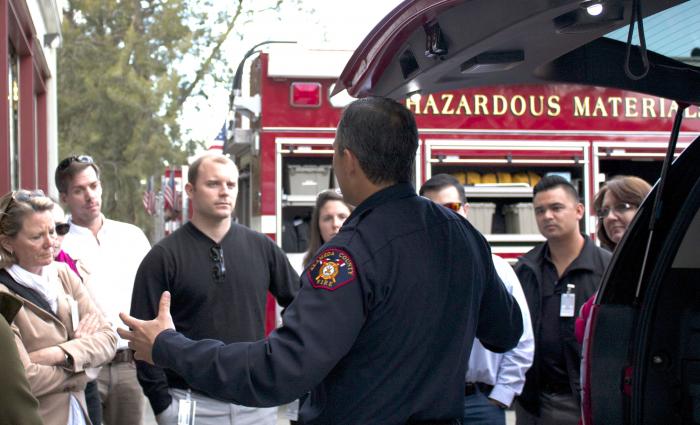 Alameda County Fire Battalion Chief Alan Evans, based at LLNL, speaks with Andy John, a student in the Georgetown University master’s program in emergency and disaster management, and other Georgetown students who spent a week at LLNL in late February. John is a a situational awareness unit leader for the Federal Emergency Management Agency National Incident Management Assistance Team West based in California.

Several dozen Georgetown University graduate students acquired a small part of their education during a recent visit to LLNL.

Participating in Georgetown’s one-year master’s program in emergency and disaster management, the students spent a week at Lawrence Livermore and found the Lab’s programs and technologies to be educationally helpful and valuable to the nation.

"The type of work we engaged in and the education we received was very helpful," said Andy John, a situational awareness unit leader for the Federal Emergency Management Agency (FEMA) National Incident Management Assistance Team West, based in California.

"I gained a new understanding of the Laboratory’s capabilities and how I could leverage those capabilities for my work with FEMA. It’s truly incredible what people have done at the Lab to get us to this point."

As part of his work, John indicated that he and his fellow FEMA emergency response providers may tap into a hydrologist to understand flood risks or even an LLNL scientist for other needs.

"I may not know the science behind a biological terrorist attack, but now I know more about the scientific work performed at LLNL, including the National Atmospheric Release Advisory Center (NARAC), which we would call upon to develop modeling for such an attack."

Matt Dykstra, the director of emergency management and emergency medical services for Portage County in Wisconsin, echoed John’s surprise at the extent of technologies under development at LLNL.

"I’m very surprised. You assume that there are many high-level programs under way at a national lab, but it’s hard to grasp that until you’re there, talk to the scientists and see some of the facilities," Dykstra said.

"Some of the programs and capabilities are extremely impressive and it becomes more helpful when their connection to emergency management at the strategic level is explained," he said.

"It was stunning and humbling. It’s a good reminder that we rely on the highly specialized knowledge and skills of scientists like these," she said.

The 37 Georgetown University students, who spent the week of Feb. 23-28 at the Lab, represent the university’s second class of master’s students in emergency and disaster management (EDM), following the initial class of 2013-14.

Many of the students in the Georgetown EDM master’s program are working in federal government departments and agencies focused on the nation’s protection, preparedness and response capabilities.

Livermore researchers played an important role in the development of the master’s program curriculum, including the understanding of high-performance computing and chemical, biological, radiological and nuclear hazards (CBRN), said Lab employee Nancy Suski, who is executive director of the Georgetown EDM program.

"Our scientists developed models and computational fluid dynamic simulations to enable the study of CBRN releases in an urban environment," Suski said, noting the Lab serves as a strategic partner for the EDM master’s program.

"For me, one of the most gratifying takeaways from the week was that the students recognized the importance of the research LLNL and other national labs do and how important it is to the nation as we face a continually evolving threat," Suski said.

"The students understood that several of these technologies, such as high-performance computing and additive manufacturing, are game-changers. They recognize that understanding these developments and what they portend for the future will drive changes in their professional field."

During their week at the Lab, the students were on the bus daily at 7 a.m., then hearing speakers and presentations, taking tours, and working with technologies until 6 p.m.

"They call it intensive for a reason," John said.

The Georgetown class visited NARAC, the Center for Accelerator Mass Spectrometry, NIF, the High Explosives Applications Facility and the Alameda County Fire Department and Hazmat unit based at LLNL; viewed demonstrations of equipment from the Radiological Assessment Program and toured the Lab’s Bioresponse Vehicle.

The first day’s keynote speaker was Bruce Goodwin, the associate director at large for national security policy and research, and director of the Center for Global Security Research. He spoke on "Strategic Latency and World Power: How Technology is Changing Our Concepts of Security," focusing on high-performance computing and additive manufacturing.

With the Georgetown students entering their eighth month of the class, they expressed high regard for the program.

"I’m thrilled with it," Yeager said. "The Georgetown master’s program offers invaluable opportunities for onsite education. My time at LLNL was a very good example of that."

Noted John: "Overall, the program is fantastic. It is a new program and we’re only the second class, but knowing Georgetown’s reputation, I knew they would get the program right."

At the end of April, the 37 students will visit the United Kingdom’s Cranfield University Defense Academy to learn about U.S. support to a foreign nation during a disaster.

In Suski’s view, she has found it "incredibly rewarding" to be able to use her experience at LLNL for higher education, particularly in the field of emergency management and planning.

"It’s humbling to work with our Georgetown students because they are so dedicated, hard-working and committed to being able to help people in emergencies."