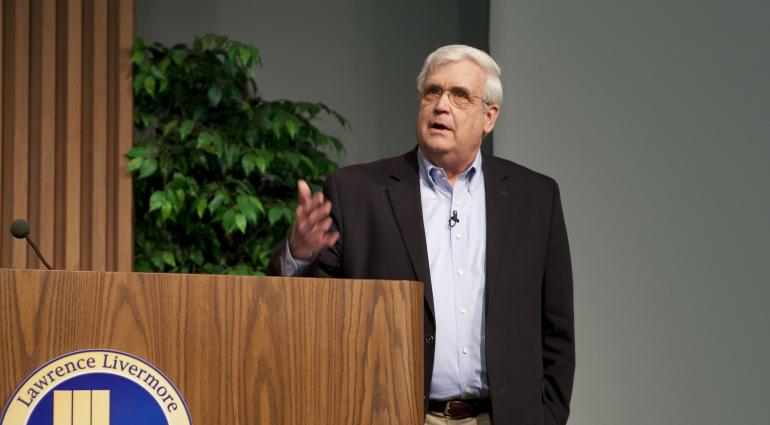 George H. Miller announced Tuesday that he will retire as director of Lawrence Livermore National Laboratory in October.

Miller also will step down as president of Lawrence Livermore National Security, LLC (LLNS), which manages the Laboratory for the Department of Energy/National Nuclear Security Administration. In a special meeting before employees, Miller announced the "difficult decision" of stepping down, but added "this is the best time for me personally and for the Laboratory to make this change. It has been my great pleasure and honor to be an employee at Lawrence Livermore National Laboratory, and to serve our nation for almost 39 years."

Miller thanked employees for their continued support throughout his career, saying he was "amazed, inspired, and humbled" by their dedication, creativity, capability, passion and humor.

"Our country is facing major challenges and I am firmly convinced that the Laboratory's capabilities and our employees' talents are ideally positioned to help solve some of the most significant problems," Miller added. "I am honored to have been given the opportunity to lead this extraordinary institution, to help nurture and expand its capabilities and to help chart a course for the future."

"Over the course of his long and distinguished career at Lawrence Livermore National Laboratory, George has been a critical player in our nation's nuclear security and a trusted adviser to me and the department's leadership," said NNSA Administrator Thomas D'Agostino. "During his tenure at the Livermore, the lab has accomplished amazing things. Our nation is safer and more secure, and global security has been enhanced by the outstanding work done under George's outstanding leadership. I consider George a great colleague as well as a good friend, and I want to personally thank him for his service to the country."

"For four decades at Lawrence Livermore National Laboratory, Dr. George Miller played an indispensable role in securing our nation's nuclear security and leading the charge toward developing the most advanced energy ever known," Congressman John Garamendi said. "His brilliant scientific mind and strong leadership helped advance the Livermore Open Campus and brought us one step closer to fusion power at the National Ignition Facility. I commend him for serving our country and promoting a better future for all humanity and wish him all the best in the years to come."

Norm Pattiz, chairman of the LLNS Board of Governors, also thanked Miller for his service, both under the longtime management of the University of California and as first president of LLNS. "Under his leadership, the Laboratory has delivered exceptional science and engineering in support of its program missions and has significantly improved its business and operations functions that support mission execution, all while transitioning to a new management environment," Pattiz said in a memo distributed to all employees.

"George has been fearless in tackling a variety of management and scientific challenges in the interest of national security and continuous improvement. He will leave a legacy of strong personal commitment to safety for employees that extends to both work and home experiences."

"Replacing George will be a daunting challenge," Pattiz said, but the Board of Governors would begin to search for a successor.

Miller has served as Laboratory director since 2006, under the management of the University of California, and in 2007 he also was named LLNS President when NNSA awarded the contract to manage LLNL to LLNS. As the first president and director under the LLNS contract, Miller guided the Laboratory through transition to a new management system, cutting down on operating costs while seeking ways to improve on the Lab's missions of science in the national interest.

Dr. Miller is a member of the United States Strategic Command's (STRATCOM) Scientific Advisory Group (SAG) and chairman of the SAG Science and Technology Panel. He also is a member of the College of William and Mary's Graduate Studies Advisory Board.

Miller received his bachelor's degree with high honors, his master's and his doctorate in physics from the College of William and Mary.