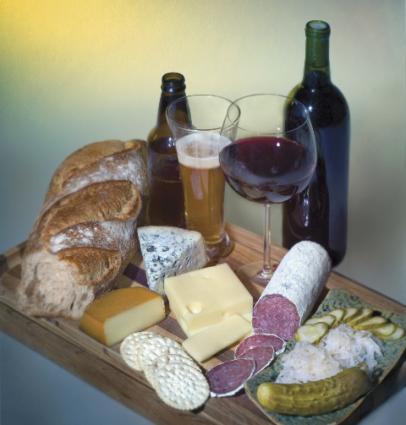 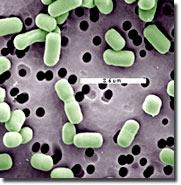 Lactobacillus brevis is frequently used as starter culture in silage fermentation, sourdough and lactic-acid-fermented types of beer. In beverages obtained by alcoholic fermentation, lactobacilli may contribute to the quality of the product but may also cause spoilage.

WALNUT CREEK, CA—With public concerns at a fevered pitch over the bacterial contamination of spinach, it is easy to lose track of how bland and deprived our world would be without the contribution to our food supply of such benign microbial players as lactic acid-producing bacteria.

Researchers from the U.S. Department of Energy Joint Genome Institute (DOE JGI) and the  University of California, Davis, and their colleagues have characterized the genome sequences of nine different lactic acid-producing bacteria, or LAB, and have published their findings in the October 17 edition of the Proceedings of the National Academy of Sciences .

The small LAB genomes encode a diverse repertoire of genes for efficient carbon and nitrogen acquisition from the nutritionally rich environments they inhabit and reflect a limited range of biosynthetic capabilities promising broad industrial applications.

Lactic acid-producing bacteria play a key role in the production of fermented foods and beverages, accounting for tens of billions of dollars in sales annually.  Products constituting a fine repast, such as wine, salami, cheese, sourdough bread, pickles, yogurt, cocoa, and coffee are all enhanced by LAB, which ferment six-carbon sugars, or hexoses, to produce lactic acid.

"DOE JGI’s contribution to the whole study of lactic acid bacteria is simply immense," said David Mills, Associate Professor, Viticulture & Enology, University of California, Davis, and senior author on the study. "Access to the genome sequences for these fermentative microorganisms will dramatically increase our understanding of their role in industrial food production, leading to more optimized production schemes.  For example, a better understanding of the role of lactic acid bacteria in cheese ripening will result in production strategies that reduce ripening time and thereby save energy.  Moreover, lactic acid bacteria are used for production of various commercial bioproducts such as dextran and antimicrobials.  The availability of these genome sequences will foster development of additional production schemes for biofuels and other important chemicals."

The publication is the culmination of a multiyear effort by the Lactic Acid Bacteria Genome Consortium, a group of at least a dozen academic organizations formed in 2001.

Paul Richardson, DOE JGI Genomic Technologies Program head, said that the functional classification embraced a variety of industrially important genera, including Lactococcus , Enterococcus , Oenococcus , Pediococcus , Streptococcus , Leuconostoc , and Lactobacillus species. "The sequence of these diverse species offered a window into the sugar metabolism and energy conversion systems of LAB, and the evolution of these systems, which helped identify key enzymes involved in the production of end products including acetic acid, lactic acid, ethanol, and CO 2 ."

"This work represents a hallmark in the genomic and bioinformatic characterization of lactic acid bacteria that have an impact on food, health, and agriculture," said Willem M. de Vos, Professor of Microbiology and Program Director of the Wageningen Center for Food Sciences in Holland.  "In a heroic effort, their publication more than doubles the number of lactic acid bacterial genomes that are publicly available and provides the research community with a wealth of high-quality data that can be used to understand and improve starter cultures for dairy, meat, and wine fermentations; probiotic cultures; and other industrial applications. The extensive bioinformatic analyses by world experts adds to the impact of the genomic data and provides new hypotheses on how microbial genomes evolve by mechanisms of genomic loss and horizontal gene acquisitions."

Joint Genome Institute
Genomic Technologies Program
Proceedings of the National Academy of Sciences
University of California/DavisDept. of Viticulture and Enology