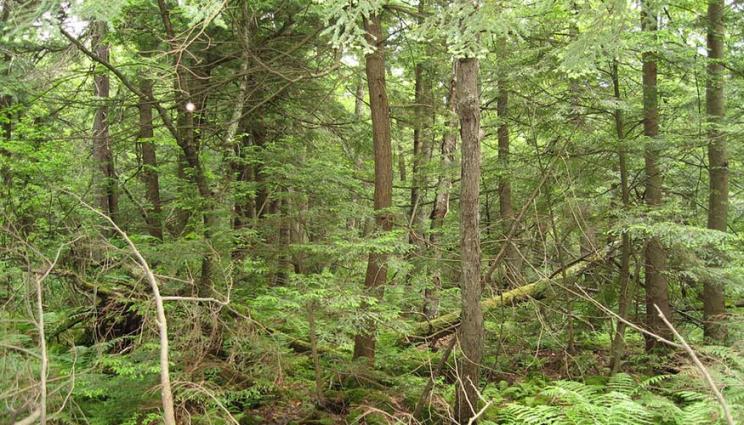 Harvard Forest is one of three forests in the National Ecological Observatory Network where LLNL researchers will be studying soil uptake of carbon. Photo courtesy of Daniel Spiess.

The future of carbon storage in forests

Lawrence Livermore National Laboratory (LLNL) researchers and collaborators are looking to the future when it comes to carbon uptake in the forest ecosystem.

Soil plays a major role in a healthy climate system. As the largest repository of carbon on land, soil can directly affect the concentration of carbon dioxide in the atmosphere.

When more nitrogen is concentrated in soil, the amount of carbon that soil can store tends to increase, which reduces carbon dioxide in the atmosphere. To this effect, forests can help mitigate rising atmospheric carbon dioxide levels. Past research also shows that this greater soil nitrogen concentration in forests may help increase tree growth.

LLNL has teamed with West Virginia University to predict the future of these effects on Earth’s forest ecosystems and understand why soil under some tree species take up more carbon in response to nitrogen deposition than others.

Using a three-year $732,177 Department of Energy grant, LLNL’s Steve Blazewicz and Peter Weber will work to link the effects of additional nitrogen on soil-dwelling microbes’ ability to break down, consume or stabilize soil carbon.

Scientific understanding of these microbial traits is uncertain, and most models assume these traits remain the same in any environment. This limits researchers’ abilities to predict future soil carbon levels, Blazewicz said.

The Livermore team will link data generated by its quantitative stable isotope probing methodology with a state-of-the-art microbial decomposition model to predict how soil microbes and their traits push soil carbon storage in different tree species.

The researchers will use this technique to measure microbial traits and diversity across three forests in the National Ecological Observatory Network in Massachusetts, Tennessee and Virginia. These sites span a historical nitrogen deposition gradient and have different nitrogen deposition levels. At each site, they will sample soil from forest plots dominated by different tree species. To isolate nitrogen’s effects, they will also sample soil from an existing nitrogen fertilization experiment in Parsons, West Virginia.

This information is critical to improving models that use mathematical equations to predict how much carbon will be in forest soils in the future.