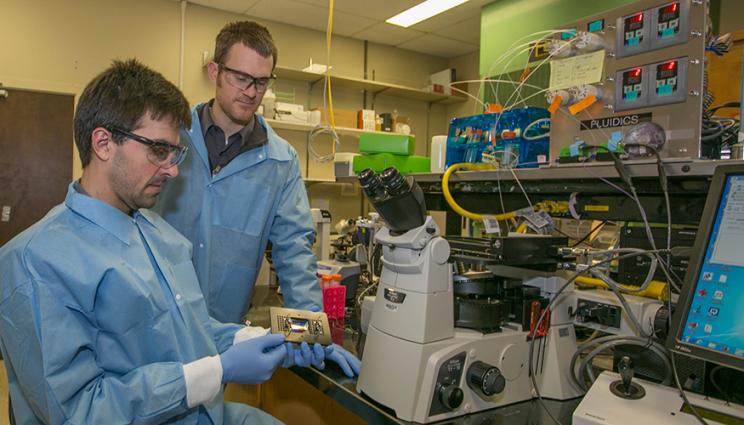 Microsystems engineers Maxim Shusteff (left) and Nick Watkins, a postdoctoral scientist, assemble a microfluidic device they are developing to separate malarial parasites by their viability. Photos by Julie Russell/LLNL

For three Lab engineers, a Lawrence Livermore National Laboratory (LLNL) commercialization fund has proven to be an oasis of assistance as they have sought to cross the legendary technology "valley of death."

In technology transfer circles, there is a phase -- between when a technology is promising and when it moves forward into commercialization -- known as the "valley of death," beyond which many technologies never advance.

LLNL’s Industrial Partnerships Office has established a program called the "Innovation Development Fund" (IDF) that provides researchers with money to further develop promising, early stage technologies, so that they are less risky for businesses and potential investors. 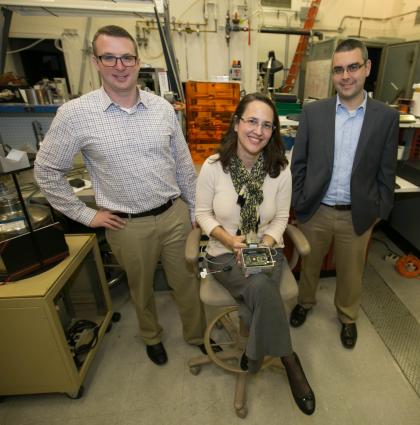 One researcher who has been given a helping hand is Rebecca Nikolic, an electrical engineer from Engineering who works in Global Security and is developing a hand-held thermal neutron detector that could be used to locate nuclear materials.

Nikolic received $100,000 about a year ago, with a later $50,000 increment, to work with Honeywell to incorporate the firm’s boron coatings into the Lab team’s detector.

"Funding from the IDF Program has been very helpful to our team in bridging the valley of death gap for the continued advancement and maturation of our technology," Nikolic said.

"We were able to do what we set out to do with Honeywell. Our detectors worked well and we included them as a part of our prototype device that was sent in the fall to Pacific Northwest National Laboratory for their Defense Threat Reduction Agency-funded test campaign."

The Lab team’s thermal neutron detector started with internal funds from the Laboratory Directed Research and Development program, later receiving funding from the Department of Homeland Security, as well as money from the National Nuclear Security Administration’s NA-22 (the Office of Nonproliferation and Verification Research and Development) and NA-82 (the Office of Nuclear Threat Science).

The thermal neutron detector is one of several radiation detection projects under way at the Laboratory. This new detector is very compact, could be used for search missions and could serve as a replacement for helium-3 detectors, which rely on a material that is expensive and has deployment issues.

Two other engineers -- Ray Mariella, who is developing a decontamination technology, and Maxim Shusteff, who is working on a vaccine purification system for malaria -- echoed Nikolic’s comments about the IDF Program.

"This program has been vital for our commercialization efforts because we can now do a demonstration of the process that is relevant for our customers," Mariella explained.

For his part, Shusteff noted that the malarial vaccine purification system technology had been sitting in mothballs for three to four years – and has been given new life through the IDF.

"The assistance I’ve received from the IDF has been critical for advancing the technology and for starting to test it for a real-world problem."

The first use is in post-detonation nuclear forensics, an application that has already attracted outside federal money. The laser process also could decontaminate radioactive, mixed waste or solid hazards, such as mercury, lead, arsenic, beryllium or uranium, on concrete or painted surfaces.

Mariella is collaborating with New Jersey-based Metal Improvement Co. Inc., which has a manufacturing facility in Livermore and has licensed an LLNL laser technology for peening jet engine fan blades and turbines, and other aircraft structures, in one of the Laboratory’s most successful technology commercialization partnerships.

Using his technique, Mariella shines a neodymium-based laser (the same type used for laser peening) through stagnant or gently flowing water. Once the laser strikes the surface, a fine powder is released.

"In effect, the laser unzips the surface. It looks as though the cement is transiently dissolved. The material is turned into particles and can be washed away," Mariella said.

"I happened to unintentionally discover that this modest-intensity laser had a profound effect on surfaces, removing the hazardous materials in a gentle and confined way."

With the IDF money, Mariella has been able to obtain non-radioactive chemicals that act as surrogates for the radioactive isotopes of elements that are likely to contaminate a surface, and is planning to conduct tests.

In the third project, Shusteff, a microsystems engineer in the Center for Micro and Nanotechnology, is developing a microfluidic device to separate malarial parasites by their viability.

"We are confident the device has the capability to determine which parasites are viable and then help separate them from the other parasites," Shusteff said. "We want the parasites that are fully viable to be used in the vaccine formulation. When they’re not viable, the effectiveness of the vaccine drops."

In December 2015, he received $109,000 of IDF funds for his work and later picked up an additional $27,000. Nick Watkins, a fellow microsystems engineer and postdoc, has assisted with the work.

Shusteff has been collaborating for about a year with Rockville, Maryland.-based Sanaria Inc., which is the only company in the world working to commercialize a whole parasite malaria vaccine.

"They are tackling a very tough problem, but there is potentially a high payoff."

Formerly known as tech maturation funds, the IDF got its new name in early 2014, according to Michael Sharer, the manager of technology commercialization in the Lab’s Industrial Partnerships Office.

IDF funds, which the Industrial Partnerships Office regards as "investments" in LLNL technologies, are usually awarded in the spring and fall, with grants running from $50,000 to $100,000 per project.

"The purpose of the IDF investments is to help our researchers cross the valley of death," Sharer said. "We hope it gets our researchers all the way through the valley; that’s the ideal scenario, to cross that chasm completely.

"But in all cases, this funding should at least remove a portion of the technology risk. And that’s why we believe this fund is critical to the Lab’s commercialization efforts."