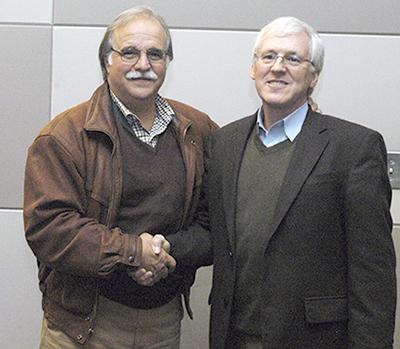 Photo by Bob Hirschfeld/NEWSLINE Frank Russo (left) leaves Livermore for a Bechtel assignment in Richland, Wash. handing over the reins to Don Boyd (right), who will serve as acting principal associate director for Operations and Business. 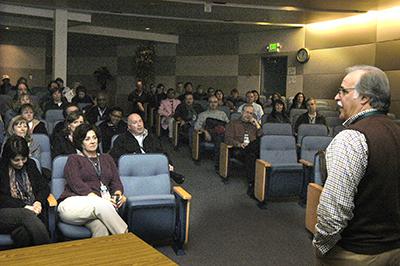 Russo held a series of all-hands meetings this week to say goodbye.

On Wednesday, Frank Russo, the Laboratory's principal associate director for Operations and Business since 2007, held a series of meetings with members of his staff and employees in the directorate to say thank you and goodbye.

Russo has been reassigned by Bechtel National Inc. to the Waste Treatment and Immobilization Plant in Richland, Wash., where he will serve as general manager beginning Jan. 18.

"It's a challenging project, and it's where they want me to be," Russo explained.

"When I arrived here, I told you that I would retire from this Laboratory," Russo told the audience at one of the meetings. "Now, I have to say that I'm a liar," he joked.

Russo commented on the quality of people at the Lab and thanked them for their support.

"Stay efficient," he said. "Thank you for two-and-a-half wonderful years. It has been my fondest assignment and greatest joy."

Earlier this week, Director George Miller commented on Russo's departure: "Russo has been an integral and essential part of the team that successfully competed for the contract to manage the Laboratory, and he has done an outstanding job at leading the Laboratory's operational and business components for the past two years. Frank will be sorely missed."

At an all-hands meeting, Russo added that he leaves with a certain amount of comfort knowing he is turning the directorate activities over to Don Boyd, who will assume his LLNL responsibilities as the acting principal associate director, effective immediately.

Boyd brings a wealth of experience to this position, having successfully served in multiple senior operational leadership roles during his career.  He joined the Laboratory as a staff member in Engineering in 1977 and held several positions including group leader for ultrasonic and radiography and deputy section manager for nondestructive evaluation in the Energy Sciences Division. He left the Laboratory in 1983 for opportunities with Battelle Memorial Institute, including serving as the deputy director for Operations at the Pacific Northwest National Laboratory from 2000 to 2006.

Boyd rejoined LLNL in 2007 as the deputy principal associate director in Global Security. He attended the U.S. Military Academy, has a master's degree in mechanical engineering from Massachusetts Institute of Technology, and holds a Ph.D. in material science from UC Davis, earned through the LLNL continuing education program.

"Don is exceptionally well qualified to take on this acting role and I am confident that he will continue to promote and foster the critical institutional operational and business initiatives we have under way for a more efficient, safe, and effective Laboratory," Miller said.