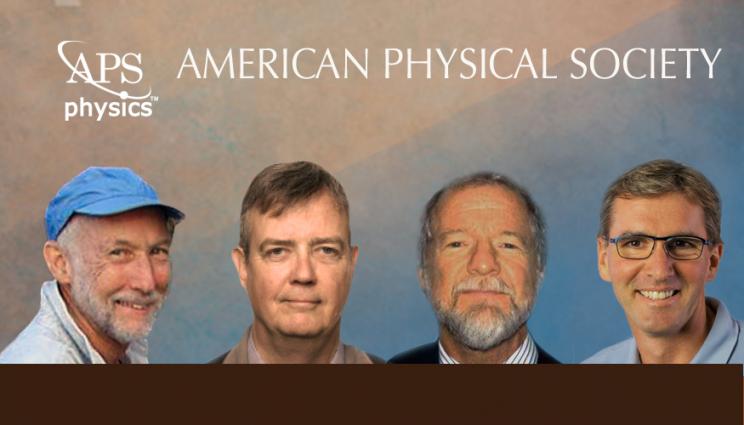 The new fellows represent a selection of physics expertise, ranging from laser plasma physics to magnetic fusion plasmas, to theoretical and computational understanding of plasma interactions and soft X-ray and free electron laser platforms. APS fellowships are awarded after extensive review and are considered a distinct honor because the evaluation process, conducted by the fellowship committees of individual divisions, topical groups and forums, relies on nomination and recommendation by one’s professional peers.

Laurent Divol, a physicist in the High Energy Density Division of the NIF and Photon Science Directorate, was selected for "fundamental contributions to laser plasma physics in hohlraums and other high energy density experiments, and for leadership in the design of high yield deuterium-tritium (DT) experiments."

“I am honored to have been elected an APS fellow of the plasma physics division,” he said.

Divol joined the Lab in 2001 and works on many subjects related to inertial confinement fusion, most involving lasers and plasmas. He arrived as the NOVA laser closed and construction of the National Ignition Facility began.

“I have enjoyed 10 years of preliminary studies and design followed by 10 years of direct applications on NIF,” Divol said. “I feel this fellowship is a recognition of my contributions to many ICF projects I had the opportunity of joining or leading over this time, an opportunity really unique to national labs."

In the future, Divol said he will continue striving with the team trying to get ignition at the National Ignition Facility.

Max Fenstermacher, a plasma physicist in the Physics Division of the Physical and Life Sciences Directorate (PLS), was cited for "using experiments and modeling to make important contributions to the understanding of tokamak divertor detachment, and to the characterization and control of edge-localized modes (ELMs) with resonant magnetic perturbations in magnetic fusion plasmas.”

“I'm very grateful to have worked with great collaborating team members who were key to the new physics understanding obtained especially from the work cited in this award,” he said.

His expertise is in the physics of plasmas in magnetic confinement devices for fusion energy applications. He is working on the physics of controlling nonlinear ELM instabilities in tokamaks using small 3D magnetic perturbation fields. He also is the coordinator of the experimental program on the DIII-D National Fusion Facility in San Diego. In 2018, he was awarded the APS John Dawson Award for Excellence in Plasma Physics Research.

Next year, Fenstermacher will present the overview of the DIII-D experimental program at the IAEA Fusion Energy Conference FEC on behalf of the DIII-D team. He also will become more involved in the ITER project as chair of the Pedestal and Edge Physics International Tokamak Physics Activity ITPA advisory group. ITER is an international nuclear fusion research and engineering megaproject, which will be the world's largest magnetic confinement plasma physics experiment.

Richard Berger, a theoretical plasma physicist who works in the Design Physics Group of the Weapons and Complex Integration Directorate, was selected for "pioneering vision for the crucial theoretical and computational understanding of plasma interactions with intense light and with other high energy density plasmas.”

“I am grateful to my colleagues who nominated me and pleased to receive this recognition from the American Physical Society,” Berger said.

He started at the Laboratory in 1991 and his research focuses on fluid and kinetic simulation of laser plasma interactions. Other interests include multi-fluid hydrodynamics and kinetic instabilities driven by interpenetrating plasma flows.

He said that he is always interested “in learning and applying my skills to interesting problems.”

Art Nelson, a senior research scientist in the Materials Science Division of PLS, was cited for “outstanding contributions to the development of soft X-ray and free electron laser analytical platforms and pump-probe techniques applied to understanding ultrafast surface phenomena and extreme states of matter.”

“I am truly honored to be elected as an APS fellow,” Nelson said. “I thank my many PLS collaborators and colleagues in the Peak Brightness Collaboration for supporting my nomination.”

He has worked at the Laboratory for 22 years. He originally joined the Lab in August 1997 as a postdoc then took an eight-month leave to complete his Fulbright Scholar assignment at the Sincrotrone Trieste in Italy. He returned to the Lab in June 1998.

Nelson’s future endeavors will include mentoring postdocs and graduate students.