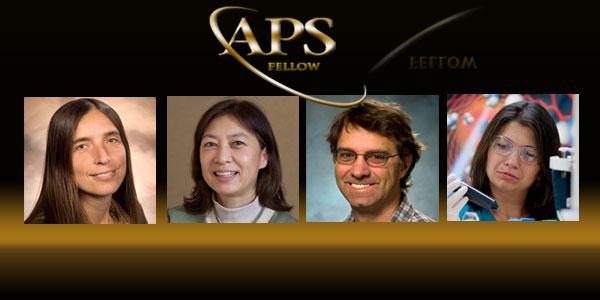 Less than half of a percent of the APS members are fellows. It is a distinct honor because the evaluation process, conducted by the fellowship committees of individual divisions, topical groups and forums, relies on nomination and recommendation by one's professional peers.

Among the LLNL winners are:

Jon Eggert, a physicist in the Physical and Life Sciences Directorate, was cited for significant achievements in linking dynamic and static compression of condensed matter in the Shock Compression of Condensed Matter category. "I feel very honored to be selected, and I am happy," Eggert said. "However, I also feel a bit odd as I get older and find my position in, and contribution to, the field changing.  I often feel no different than I did 25 years ago as a new graduate student in awe of my professors and senior colleagues. Except that now I realize that I am becoming one of those senior colleagues, as are all of my friends and contemporaries."

Hye-Sook Park, a physicist in the inertial confinement fusion and high energy density physics division of the National Ignition Facility, was cited for development of seminal experimental techniques to create and probe plasmas with extreme density and temperature in the Plasma Physics category.

Ramona Vogt, a staff scientist in the Physical and Life Sciences Directorate, was cited in the Nuclear Physics category for her contribution to the science community's understanding of the dynamics of heavy quark and charmonium production in collisions with nuclei and providing guidance for using these probes in experimental investigations of hard dynamics in collisions with nuclei.

"It's nice to be recognized," said Vogt, who is vice-chair of APS's Topical Group on Hadronic Physics and the first woman to serve in this position. "I like being involved with APS. It's important for us to remember that we are part of a larger community and we have a chance to influence what goes on in physics."

Olgica Bakajin, a former LLNL chief scientist, was cited in the Biological Physics category for her contributions to the development of new instrumentation for studies of protein folding and for fundamental understanding of transport and selectivity at nano-scale. Bakajin's work also could lead to a better understanding of membrane channels. She now serves as chief technology officer of Porifera, which licensed an LLNL carbon nanotube technology that she helped develop.

APS fellowships are a distinct honor given after extensive review. Election to APS fellowship is limited to no more than one half of one percent of APS' membership for a given year. Receiving a fellowship reflects the honor and approbation of one's professional peers. This year, more than 200 members were elected APS fellows.