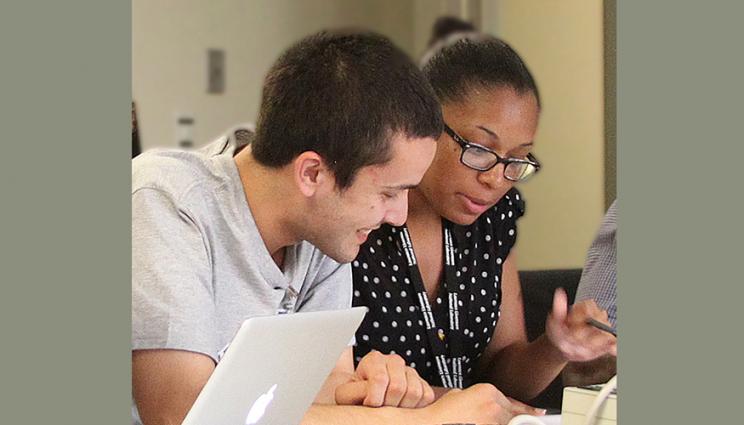 Jasmine Bowers, with fellow intern Josh Grosh, worked together at a Cyber Defenders event at LLNL in 2014.

Jasmine Bowers, former summer student at Lawrence Livermore National Laboratory (LLNL), recently made history when she became the first African American to earn a doctorate in computer science from the University of Florida, where she attended through the GEM fellowship program.

Not a surprising feat considering Bowers’ long list of accomplishments, starting in 2008 when she was awarded a full presidential scholarship to attend Fort Valley State University (FVSU), a public historically Black university in Fort Valley, Georgia. There she earned a bachelor’s degree in mathematics and computer science followed by her master’s in computer science from North Carolina A&T State University.

While pursuing her advanced degrees, Bowers spent three summers working at LLNL. Originally from Charlotte, North Carolina, Bowers was introduced to the LLNL Cyber Defenders program and summer student internship opportunities in 2013 after meeting Tony Baylis, director of the LLNL Office of Strategic Diversity and Inclusion Programs, at the Richard Tapia Celebration of Diversity in Computing,

“The Cyber Defenders Program was a great entry point to the cybersecurity space,” Bowers said. "With outstanding LLNL mentors like Celeste Matarazzo, Evi Dube, Tony Baylis, Kevin Griffin, David Sontheimer, Tony Bartoletti and Karen Lloyd, I gained a lifelong network of individuals who have continuously supported me throughout my academic career.”

Griffin, computer scientist/HPCIC solutions executive and former mentor of Bowers, was impressed with her tenacity. “Jasmine not only excelled with her technical work but she also had a penchant for serving and educating friends, family and members of her community. I have really enjoyed seeing Jasmine grow over the years and watching her transition from a mentee to a colleague.”

Bowers enjoyed the collaborative environment at the Lab and spent three summers (2013-2015) in the program as an intern. “It allowed us as interns to have the opportunity to brainstorm among ourselves and develop ideas and strategies to solve real-world problems. I highly recommend future students take advantage of internship opportunities to gain more insight into what a potential career in their field would look like, as well as build lasting relationships with their mentors and colleagues.”

Matarazzo, a cybersecurity researcher and former mentor to Bowers, called her a role model and a true leader. “She coached other students and had a clear vision about her goals and dedication to make them happen. I appreciate that she was always an advocate for herself and others; if a situation needed attention, she was always the one to come forward and make us (Cyber Defenders managers) aware and provided suggestions for improvement. She had passion and dedication about computer science and cybersecurity, and I am thrilled that she realized her goals as we all knew she would.”

Bartoletti, a senior cybersecurity analyst and former mentor, remembers Bowers as industrious, enthusiastic and self-motivated. “It has been said that ‘nature abhors a vacuum.’ I think the same can be said of Jasmine; if her schedule has a spare hour, she will find a way to fill it with productive effort.”

Bowers is passionate about sharing her experience and helping others like her to achieve their goals. “Although the numbers are increasing, there is still a small population of African American women with graduate degrees in computer science,” Bowers said. “By earning a doctorate, my goal is to leverage my expertise and work in various areas to help increase the number of African American women in computer science and technology.”

Now that she has accomplished her educational goals and received her doctorate, Bowers is ready to start her career. She recently accepted a position as a senior cybersecurity engineer at the MITRE Corporation in northern Virginia.