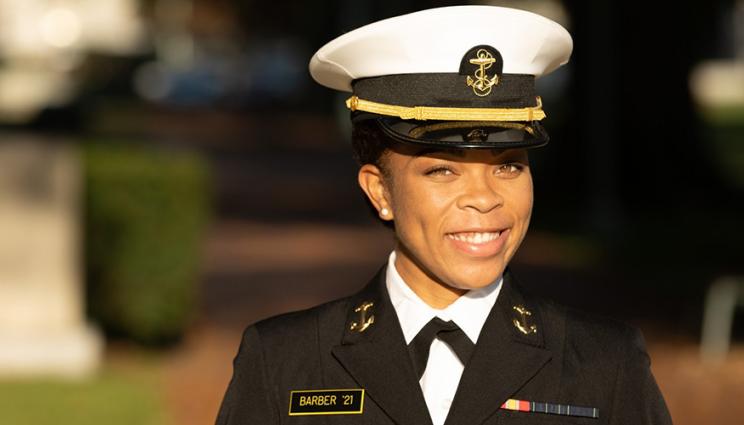 Sydney Barber will become brigade commander next semester, the highest leadership position in the brigade, making her the first Black woman to be named in the role.

Sydney Barber, former intern at Lawrence Livermore National Laboratory (LLNL), is making history at the United States Naval Academy. It was recently announced that 1st class midshipman Barber will become brigade commander next semester, the highest leadership position in the brigade, making her the first Black woman to be named in the role.

Barber formerly completed a seven-week internship at LLNL under the Military Academic Research Associates (MARA) program. MARA is a program funded by NNSA under Military Academic Collaborations in the summer of 2019. Throughout her internship, Barber was instrumental in doing breakthrough research on bio-electrochemical uses for carbon nanotubes. She was tasked to study membrane interactions and ion transport in carbon nanotube porins (CNTPs), an LLNL-developed artificial nano channel platform that mimics biological functionality. CNTPs are distinguished by their extraordinary efficient transport properties that enable fast water, gas and ion transport through these channels with interesting selectivity traits.

“Most of the military interns who come to my group (and to LLNL) have relatively short assignments, so it is always a challenge to get them trained and complete the project by the time they have to leave,” said Alex Noy, senior research scientist in the Materials Science Division at LLNL. Noy, who oversaw Barber’s internship, recalls her quiet confidence and a can-do attitude. “Sydney completed her assignment on time and got very encouraging results by the time her internship ended. She worked alongside Jacqueline Hicks, an exchange visitor from the University of Nottingham, United Kingdom. The project was a joint effort between my group at LLNL and Jacqueline’s’ postdoc adviser, professor Frankie Rawson in Nottingham. I remember Jacqueline telling me that Sydney was the best student she has ever worked with.”

Barber fondly recalls her time at LLNL and was impacted by those she worked with. “I worked with Jacqueline Hicks on her postdoctoral research and she had an incredible influence on me during the short time that I worked with her,” Barber said. “I had little to no experience in the particular field of study that her research was focused on, but she deeply invested in my development and paved the way for me in my pursuit of future research. Although there was a steep learning curve I was tasked to overcome, I greatly appreciate the way that she challenged me and saw my fullest potential even in moments when I did not see it within myself. I am forever grateful to have had her as such a great friend and mentor to me.”

“I have always enjoyed having military interns in my research team,” Noy said. “As a representative group they are mature, goal-oriented team players eager to learn and contribute to the research in a real and significant way. I am not surprised she rose to this role at the Naval Academy, it was pretty clear to us that she was a strong and very talented person with very strong leadership potential.”

Although her time at LLNL was short, the internship was impactful and challenging. “My experience interning with LLNL was one of the most developmental experiences that I have had in my undergraduate career,” Barber said. “I was intellectually challenged in ways that I had never been in the classroom, both in the research that I did and the professional connections that I made with some of the most esteemed scientists in the world. I was inspired to use what I learned to pursue further research in the field that I studied once I returned to school. Although I will not be pursuing research after graduation and upon commissioning into the Marine Corps, I am extremely grateful for the opportunity my LLNL experience provided me.”

Barber also is accomplished and active in sports, clubs and several associations. She was a walk-on sprinter and hurdler of the Navy Women’s Varsity Track and Field team, is the co-president of the Navy Fellowship of Christian Athletes Club, secretary for the National Society of Black Engineers and a member of the USNA Gospel Choir and Midshipman Black Studies Club. Barber served as the 13th company’s executive officer this past Plebe Summer and serves as the brigade’s 1st regiment executive officer.

Upon graduation from the Naval Academy next year, Barber plans to commission as an officer into the Marine Ground community. After completing a six-month indoctrination program into the Marine Corps, she will begin her career in a specialty community that will be assigned at the conclusion of basic training.

When asked about her new role, Barber said, “Earning the title of brigade commander speaks volumes, but the title itself is not nearly as significant as the opportunity it brings to lead a team in doing something I believe will be truly special.”

While she is not completely certain what the future will hold, she said, “Down the line I would greatly consider a career at LLNL if the opportunity presented itself to me.”