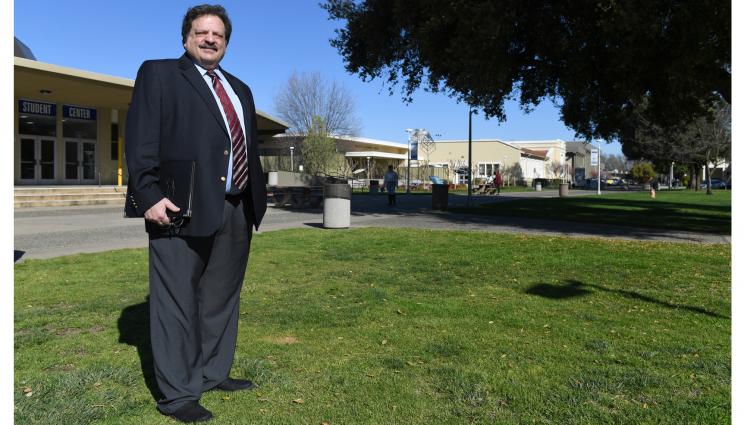 A former Lawrence Livermore National Laboratory environmental scientist, Jim Houpis, is now the president of Modesto Junior College, one of the oldest community colleges in California, with more than 18,000 day and evening students enrolled each semester. Photo by David Todd

Twenty-three years after leaving LLNL in 1996, Houpis is now the president of Modesto Junior College (MJC), one of the oldest community colleges in California, with more than 18,000 day and evening students enrolled each semester.

"It’s been great," Houpis said of his new job, which started March 1. "The students are absolutely wonderful. They have no problem coming up to talk to me; I think they appreciate having a college president who is student-focused and approachable.

"The community also has been outstanding. They look to the college to partner with us on programs to make the community a better place. The community really seems to appreciate our campus."

Houpis came to LLNL in 1980 as a 23-year-old graduate student as he was working on his Ph.D. in wildland resource science at the University of California, Berkeley, studying air pollution effects on pine trees.

"My first research job at the Laboratory was working on the effects of air pollution on crops, particularly alfalfa fields, in the Central Valley," Houpis said in a recent telephone interview, recalling that he worked with Lab researcher Joe Shinn.

Houpis continued at the Laboratory for 16 years, working as a graduate student for six years, an environmental intern for two years and as a Lab employee and environmental scientist for eight years.

"I was like a kid in a candy shop. It was a blast working at the Lab. I was able to work on many large-scale projects that many of my colleagues never would have a chance to work on," Houpis said.

When it became clear that the federal government wasn’t interested in studying climate change at that time, Houpis began to work with another Lab scientist, Eileen Vergino, on science and math education.

"Eileen and I were part of a group. I directed several master high school teachers to develop and implement multidisciplinary curricula in biotechnology. After working with these master teachers, such as Kirk Brown, who was then at Tracy High School and is now in the San Joaquin County Office of Education, I fell in love with the idea of teaching."

As a result, when LLNL offered a voluntary separation program in 1996, Houpis used the chance to go into education, becoming a full professor in environmental sciences at Southern Illinois University in Edwardville.

"They hired me to fix the program and I loved it. I started working on the remediation of heavy metal sites."

Houpis taught at Southern Illinois from 1996 through 2001, but he and his family missed California and its sunny, fair winter climes.

Even though his parents never went to college, all four of their children — Houpis, plus his brother and two sisters — have gone to college.

"Over the past 40 years, I’ve acquired all sorts of ideas and skills, both intellectually and administratively. I want to take some of those ideas and see how they can be melded into transforming a community college.

"One of those ideas is to see how we can reduce the costs for a community college education. Part of that effort is through a zero-textbook cost initiative, such as using online educational resources."

Currently, tuition at Modesto Junior College is about $50 per unit or about $500 per semester.

Two other problems that Houpis would like to tackle are guidance support for students and access for adult students.

"About 50 to 60 percent of our California community college students are first-generation college students, so they can’t rely on their parents for guidance or support. It would be good to find ways to help them," Houpis said.

Some adult students have a difficult time making it to campus because of their jobs or lack of vehicles, Houpis said, noting that one solution would be to offer more online degree options.

The new MJC president indicated that he would "absolutely" like to see more science outreach between LLNL researchers and his college’s students and professors.

"If there are scientists and mathematicians in the Central Valley who work for the Lab and are interested in teaching, I’d love to have them call me. We have a large science outreach and that’s something of which we’re very supportive."