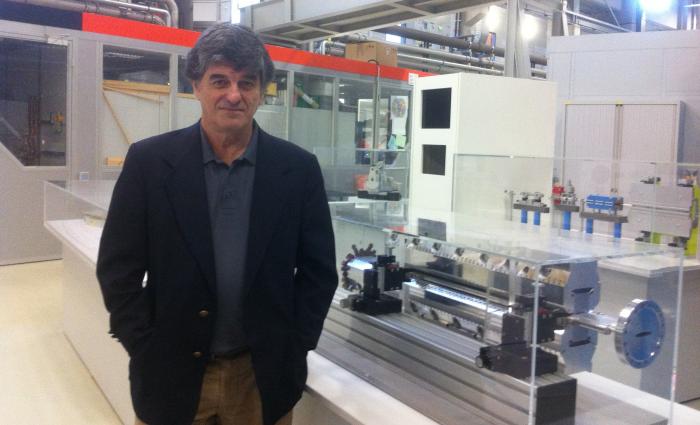 Zapata received the Excellence in Technology Commercialization Award, which recognizes his outstanding technical contributions to the development of an LLNL laser system. Zapata was the prime contributor in the construction of an injection-seeded, phase-conjugated regenerative slab amplifier of remarkable performance that enabled the commercial development of laser peening for metal components to improve their fatigue life. Zapata’s research also enabled the laser-peened forming of large sheet metal structures for the aircraft industry.

Laser peening uses a unique high-energy laser that's fired at the surface of a metal part to generate pressure pulses of one million pounds per square inch, which propagate through the part to plastically compress the metal and thereby generate an area of residual compressive stress. In doing so, peening makes the part resistant to cracking and longer lasting.

"I am proud to be a contributor to this unique high-power laser system that became a commercial success, stirring a paradigm shift in metal strengthening technology for the aerospace industry," Zapata said.  "I am honored and pleased by the recognition bestowed on me with this award."

During his 17 years at LLNL, Zapata also contributed to the development of fusion amplifiers for the National Ignition Facility. Several of his patents have found industrial applications, and he received a Federal Laboratory Consortium Award for Excellence in Technology Transfer in 1997.

He is a scientist at the Massachusetts Institute of Technology’s Research Laboratory of Electronics. Zapata’s work often takes him to Hamburg, Germany, where he is collaborating with the Deutsches Elektronen-Synchrotron CFEL/Ultrafast Optics and X-Rays Division on the average power scaling of ultrafast lasers.