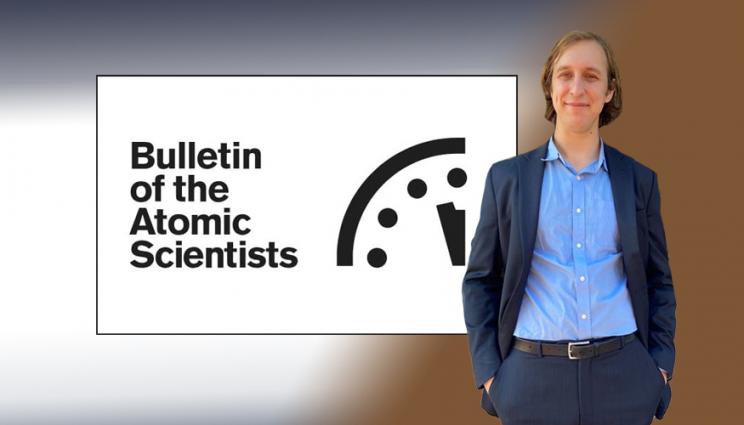 Jake Tibbetts, who interned at LLNL’s Center for Global Security Research from May 2019 to May 2020, is the recipient of the 2020 Leonard Rieser Award from the Bulletin of the Atomic Scientists.

A former intern from Lawrence Livermore National Laboratory's (LLNL's) Center for Global Security Research (CGSR) has been named the recipient of the 2020 Leonard Rieser Award from the Bulletin of the Atomic Scientists.

Jake Tibbetts, who worked as a research associate at CGSR from May 2019 to May 2020, won the honor for a “Voices of Tomorrow” essay he wrote for the Bulletin.

The announcement that Tibbetts won the Rieser award, which carries a $1,000 cash prize, will be made today (Dec. 15) in a newsletter run by the Bulletin.

“It is an honor to be chosen as the Rieser award recipient,” Tibbetts said. “This article was the capstone of my work at CGSR, and I could not have written it without the support and mentoring I received during my time there.”

During his year at LLNL, Tibbetts provided support to the Project on Nuclear Gaming (PoNG), a collaboration of LLNL, Sandia National Laboratories (SNL) and the University of California, Berkeley. As part of PoNG, the team developed a game called SIGNAL, which serves as the first example of the large-scale, experimental gaming approach for examining nuclear deterrence and conflict escalation dynamics.

Tibbetts also performed a research project for the Lab’s Office of Defense Coordination and conducted research on the impact of quantum computing for securing national security information.

“In his piece, Jake Tibbetts accomplished the kind of deep, thoughtful and well-crafted journalism that is the Bulletin's hallmark," editor-in-chief John Mecklin said. "Quantum computing is a complex field; many articles about it are full of strange exaggerations and tangled prose. Tibbetts' piece, on the other hand, is an exemplar of clarity and precision and genuinely worthy of the Rieser award.”

His paper, “Keeping Classified Information Secret in a World of Quantum Computing,” was published in the Bulletin’s February 2020 edition.

The Rieser award is the capstone of the Bulletin’s Next Generation Program, created to ensure that new voices, steeped in science and public policy, have a platform from which to address existential challenges posed by nuclear proliferation, climate change and disruptive technologies.

“Jake arrived at CGSR with a keen interest in developing skills necessary for applying his technical education and knowledge to the development of sound national security policy,” said Wes Spain, a senior fellow at CGSR. “He had a very clear goal of publishing his work to reach the larger policy and national security communities.”

One of the priorities of CGSR is to help develop the next generation of national security professionals and leaders, according to Spain.

“Jake is clearly well on his way to making a positive impact in that community. It is a pleasure to see one of our own recognized for his work.”

In Tibbetts’ view, CGSR is one of the few places where engineers and scientists can obtain the support they need to develop critical skills in public policy, national security and communication.

“At CGSR, I was immersed in a welcoming community of experts with a diversity of backgrounds and experiences,” Tibbetts said.

Tibbetts indicated that he always looks for ways to develop his skills at communicating technical information to people without technical backgrounds, so that they can make informed decisions.

“As technology becomes more ubiquitous in all aspects of our society, it has become critical for scientists and engineers to be able to effectively communicate their work and its implications to the public,” he said.

Tibbetts is continuing his education as a master’s student studying electrical engineering and computer science at UC Berkeley.