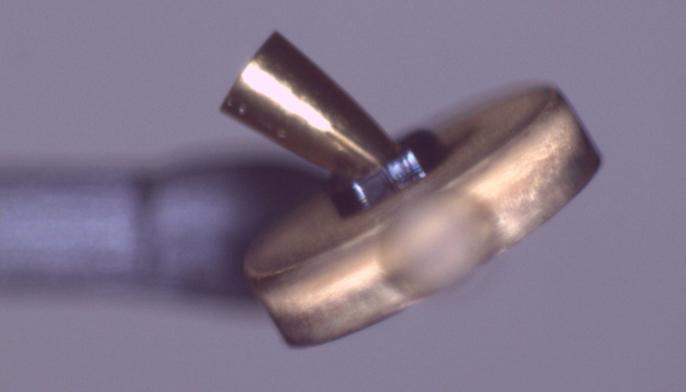 This photo of a CPC assembly shows the cone-shaped, 1-millimeter gold CPC attached to a 500-micron-thick gold foil. Between the cone and the foil is a plastic support. The target was produced and assembled by Willie Hooke of General Atomics. Credit: Rick Heredia

The targets, called compound parabolic concentrators (CPC), give ARC — NIF’s “laser within a laser” — the ability to produce effects associated with laser intensities more than 10 times greater than it was designed to deliver.

The CPCs, incorporated directly into the target, have enabled three high-profile NIF & Photon Science campaigns exploring electron-positron pair production, proton acceleration and the production of hotter, brighter X-ray sources, according to a paper published in the February edition of The Optical Society’s journal Optica. The paper was posted online Jan. 28.

“The results are significant because it means we can do the sort of experiments on ARC that we didn’t think we’d be able to do,” said physicist Andrew MacPhee, the paper’s corresponding author. “And it’s not just an idea anymore. It actually worked.”

ARC is a powerful short-pulse laser system that operates as both a diagnostic tool and a powerful energy source in unison with NIF, the world’s most energetic laser (see NIF in Focus: Inside the ARC Laser).

ARC was built to operate at about 1018 W/cm2 (1 quintillion watts per square centimeter) on target, enough to serve its design purposes. However, producing accelerating fields sufficient to generate significant relativistic effects — where particles are accelerated to a significant fraction of the speed of light — requires considerably more intensity. The research team sought to concentrate the energy produced by ARC’s four beamlets when they arrive during picosecond (trillionths of a second)-scale events inside NIF’s target chamber.

Using CPC targets, the energy that was disbursed into the wings of the ARC focal spot — extending several hundred microns from the laser axis — was added to the central high-intensity interaction region. This allows better coupling of the available laser energy to the target.

Roland Winston and Henry Hinterberger originally described CPCs in 1966 for the efficient collection of diffuse Cherenkov radiation (radiation generated when a particle moves faster than the phase velocity of light through a medium) during high-energy physics experiments. CPCs were subsequently more widely adopted to concentrate light for solar power production.

CPCs have since been used in optoelectronics for diode-pumped lasers such as the R&D 100 Award-winning Diode-Pumped Solid-State Green Laser system for industrial material processing, which was developed at LLNL in 1999.

For the ARC experiments, researchers attributed the success of CPCs to a combination of geometric and refractive focusing of the laser pulse by the expanding cone wall material and enhanced laser absorption from the pre-formed plasma confined near the CPC’s tip.

“A considerable fraction of the energy arrives near grazing incidence,” MacPhee said. “As the interaction is very sensitive to the conditions of the surface left by any pre-pulse, this makes it difficult to model. We are engaging in a series of experiments at a number of facilities using controlled pre-pulse conditions to better enable the modeling effort and to understand the process more completely.”

For the first experiments, the researchers used the highest-quality targets made by San Diego’s General Atomics, which gold-coated a diamond-turned mandrel — the same way NIF hohlraums are fabricated. The CPCs are about 1 millimeter long with 50-micron- or 25-micron-diameter tips, and loosely resemble a tall flower vase that is gradually tapered inward from the open end.

The cone is truncated near the smaller end and attached to the target, typically a 500-micron-thick gold foil. The beams enter through the larger opening, with the cone’s shape confining the plasma and directing the energy toward the foil at the tip.

By concentrating and confining more energy in a smaller spot, “we have gone from a barely relativistic to a strongly relativistic regime,” MacPhee said. “This has enabled ARC to be used for electron-positron pair production, proton acceleration and multi-MeV (million electron volt) X-ray radiography.”

Physicist Hui Chen said she and her team were initially inspired to try CPCs to drive electrons for positron generation because of a talk MacPhee delivered at the 2007 American Physical Society’s Division of Plasma Physics conference.

“In the beginning, we were sort of stuck as we really needed higher laser intensities,” Chen said. “The venture paid off beautifully. The CPCs enabled us to make a substantial number of positrons on ARC right away. More importantly, the success inspired other users to use it for various applications.”

Soon after ARC came online, “we started looking at a number of novel ideas to increase ARC’s intensity,” said Tammy Ma, program element lead for High-Intensity Laser HED Science. “The CPCs have turned out to be a really elegant and effective solution, and they will allow us to greatly increase ARC’s application space.”

One of the new applications is the characterization and timing of NIF nuclear and X-ray diagnostics.

“The extremely bright and short X-ray pulses ARC can generate with these targets has given us a new tool to improve our diagnostic measurements and helped resolve some longstanding discrepancies between diagnostics,” said Shaun Kerr, a postdoctoral researcher with the NIF Nuclear Diagnostics Group.

Another promising design the authors hope to test soon truncates the CPC further from the tip and uses a transverse electromagnetic mode named TEM01*, or the “doughnut” laser mode to produce a free-standing point source X-ray backlighter that is insensitive to laser pointing.

ARC’s deformable mirror has the potential to produce an approximation of such a laser mode without damaging the compressor gratings or other downstream optics. In addition, with no rays crossing the laser axis before reaching the target, a smaller spot can be produced using a similar shaped CPC. "Tests with the truncated CPC will expand scientific knowledge of the effects of the pre-formed plasma and confinement, which for now “is a bit limited,” MacPhee said.

They have been conducting those experiments on the Titan Laser at LLNL’s Jupiter Laser Facility in collaboration with the United Kingdom’s Rutherford Appleton Laboratory and at the Texas Petawatt Laser, working with researchers at the University of Texas at Austin.

Initially, the CPC targets were produced by coating a diamond-turned mandrel with gold and dissolving away the mandrel, a process that can be expensive and time-consuming. Researchers have since tested CPCs made by additive manufacturing, which have performed almost as well while reducing manufacturing time and costs, potentially opening the door for their use by other laser researchers.

“Anybody who has a laser with a less than ideal focal spot or pointing stability could use targets like this to reach conditions corresponding to higher effective intensities,” MacPhee said.