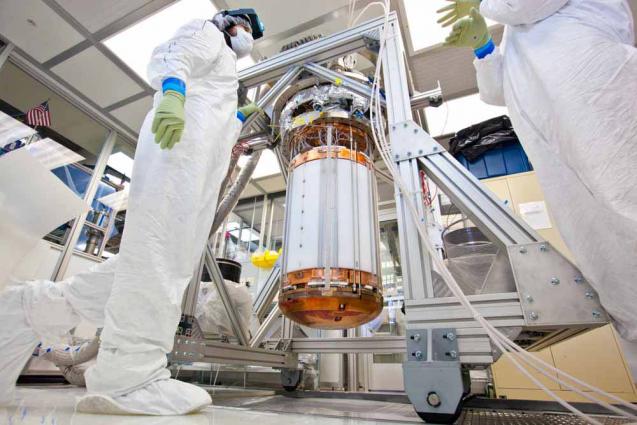 LUX researchers, seen here in a clean room on the surface at the Sanford Lab, work on the interior of the detector, before it is inserted into its titanium cryostat. 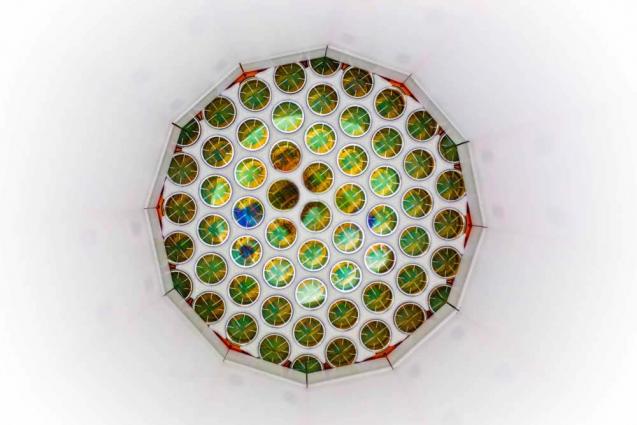 Photomultiplier tubes capable of detecting as little as a single photon of light line the top and bottom of the LUX dark matter detector. They will record the position and intensity of collisions between dark matter particles and xenon nuclei.

LEAD, S.D. - After its first run of more than three months, operating a mile underground in the Black Hills of South Dakota, a new experiment named LUX has proven itself the most sensitive dark matter detector in the world.

Gaitskell and McKinsey announced the LUX first-run results, on behalf of the collaboration, at a seminar Wednesday at the Sanford Underground Research Facility (Sanford Lab) in Lead, S.D. The Sanford Lab is a state-owned facility, and the U.S. Department of Energy (DOE) supports its operation. The LUX scientific collaboration, which is supported by the National Science Foundation and DOE, includes 17 research universities and national laboratories in the United States, the United Kingdom and Portugal.

Three researchers from Lawrence Livermore National Laboratory -- principal investigator Adam Bernstein and staff scientists Peter Sorensen and Kareem Kazkaz, all from the Lab's Rare Event Detection Group in Physics Division -- have been closely involved with the LUX project since its inception.

Dark matter, so far observed only by its gravitational effects on galaxies and clusters of galaxies, is the predominant form of matter in the universe. Weakly interacting massive particles, or WIMPs -- so-called because they rarely interact with ordinary matter except through gravity -- are the leading theoretical candidates for dark matter. The mass of WIMPs is unknown, but theories and results from other experiments suggest a number of possibilities.

LUX has a peak sensitivity at a WIMP mass of 33 GeV/c2 (see **below), with a sensitivity limit three times better than any previous experiment. LUX also has a sensitivity that is more than 20 times better than previous experiments for low-mass WIMPs, whose possible detection has been suggested by other experiments. Three candidate low-mass WIMP events recently reported in ultra-cold silicon detectors would have produced more than 1,600 events in LUX's much larger detector, or one every 80 minutes in the recent run. No such signals were seen.

"This is only the beginning for LUX," McKinsey said. "Now that we understand the instrument and its backgrounds, we will continue to take data, testing for more and more elusive candidates for dark matter."

In both theory and practice, collisions between WIMPs and normal matter are rare and extremely difficult to detect, especially because a constant rain of cosmic radiation from space can drown out the faint signals. That's why LUX is searching for WIMPs 4,850 feet underground in the Sanford Lab, where few cosmic ray particles can penetrate. The detector is further protected from background radiation from the surrounding rock by immersion in a tank of ultra-pure water.

At the heart of the experiment is a 6-foot-tall titanium tank filled with almost a third of a ton of liquid xenon, cooled to minus 150 degrees Fahrenheit. If a WIMP strikes a xenon atom it recoils from other xenon atoms and emits photons (light) and electrons. The electrons are drawn upward by an electrical field and interact with a thin layer of xenon gas at the top of the tank, releasing more photons.

Light detectors in the top and bottom of the tank are each capable of detecting a single photon, so the locations of the two photon signals -- one at the collision point, the other at the top of the tank -- can be pinpointed to within a few millimeters. The energy of the interaction can be precisely measured from the brightness of the signals.

"LUX is a complex instrument," McKinsey said, "but it ensures that each WIMP event's unique signature of position and energy will be precisely recorded."

Lawrence Livermore's Bernstein noted that, "LUX is a great example of the powerful benefit of LLNL's internal science funding (Laboratory Directed Research and Development or LDRD) for fundamental science, with key contributions from scientists and engineers."

LLNL's Kazkaz was responsible for the design of the Monte Carlo model of the detector, known as LUXSim. Sorensen made key contributions to the analysis that underpins the current results, and has published a number of important papers on how best to do dark matter searches with this powerful new class of detector.

"Through its LDRD program, LLNL was able to make available the Laboratory's strong engineering capabilities to help get the detector built, and to ensure its safe design and operation," Bernstein said. "The LUX experiment also neatly connects to Laboratory mission-oriented science. The same dual-phase technology used by LUX can be used in smaller-footprint antineutrino detectors for reactor monitoring applications, and may be useful to address technology gaps in low energy neutron spectroscopy for more accurate and efficient characterization of fissile materials."

LUX's biggest advantage as a dark matter detector is its size, a large xenon target whose outer regions further shield the interior from gamma rays and neutrons. Installed in the Sanford Lab in the summer of 2012, the experiment was filled with liquid xenon in February, and its first run of three months was conducted this spring and summer, followed by intensive analysis of the data. The dark matter search will continue through the next two years.

"The universe's mysterious dark sector presents us with two of the most thrilling challenges in all of physics," says Saul Perlmutter of DOE's Lawrence Berkeley National Laboratory (Berkeley Lab), a winner of the 2011 Nobel Prize in physics for discovering the accelerating expansion of the universe. "We call it the dark sector precisely because we don't know what accounts for most of the energy and mass in the universe. Dark energy is one challenge, and as for the other, the LUX experiment's first data now take the lead in the hunt for the dark matter component of the dark sector."

Planning for the next-generation dark matter experiment at the Sanford Lab already is under way. Compared to LUX's third of a ton of liquid xenon, the LUX-ZEPLIN, or LZ, experiment would have a 7-ton liquid xenon target inside the same 72,000-gallon tank of pure water used by LUX. Case Western Reserve University physicist Tom Shutt, the spokesman for LZ and a previous co-spokesperson for LUX, said one goal of LUX was to figure out how to build an even larger detector. "LZ will be a thousand times more sensitive than the LUX detector," Shutt says. "It will just begin to see an irreducible background of neutrinos that may ultimately set the limit to our ability to measure dark matter."