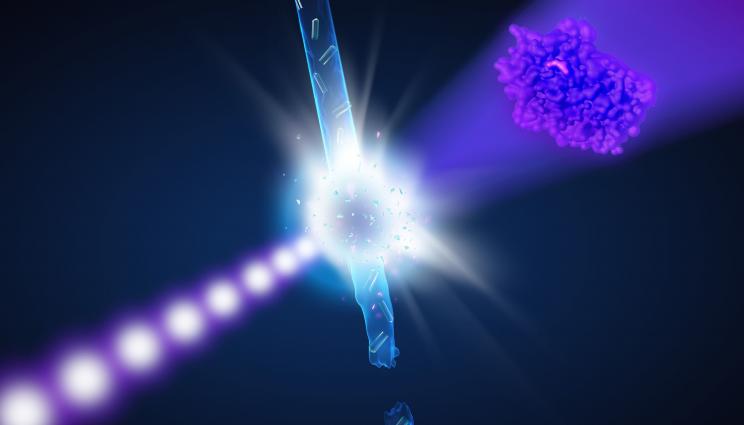 This artist’s rendering depicts a previously unknown structure of an enzyme responsible for antibiotics resistance. The pioneering work demonstrates that the new European XFEL research facility can speed up experiments by more than an order of magnitude. Image by Lucid Berlin/DESY

An international collaboration led by Deutsches Elektronen-Synchrotron (DESY) and consisting of more than 100 researchers, including three Lawrence Livermore National Laboratory (LLNL) scientists, has announced the results of the first scientific experiments at Europe's new X-ray laser, the European XFEL.

The pioneering work not only demonstrates that the new research facility can speed up experiments by more than an order of magnitude, it also reveals a previously unknown structure of an enzyme responsible for antibiotics resistance.

"The groundbreaking work of the first team to use the European XFEL has paved the way for all users of the facility who will greatly benefit from these pioneering experiments," said European XFEL managing director Robert Feidenhans'l. "We are very pleased -- these results show that the facility works even better than we had expected and is ready to deliver new scientific breakthroughs."

The scientists present their results, including the first new protein structure solved at the European XFEL, in the journal Nature Communications.

"Being at a totally new class of facility, we had to master many challenges that nobody had tackled before," said former LLNL researcher Anton Barty, now at the Centre for Free-Electron Laser Science (CFEL) at DESY, who led the team of about 125 researchers involved in the first experiments that were open to the  scientific community. "I compare it to the maiden flight of a novel aircraft: all calculations and assembly completed, everything says it will work, but not until you try it, do you know whether it actually flies."

The first "beam time" for experiments at the European XFEL took place two weeks after the opening of the facility in September 2017 and was open to all scientists from the community to participate, contribute, learn and gain experience in how to carry out such measurements at this facility.

A team of LLNL scientists, including Matthias Frank, Megan Shelby and Matthew Coleman, participated in a workshop in late 2016 at the European XFEL and in discussions that followed, helped outline the first biological imaging experiments at the new facility.

In these interactions that involved long-standing LLNL collaborators from DESY and other institutions, the researchers conceived and defined three beam time proposals for three key experiments related to biological imaging that could be performed during the first beam times of the European XFEL.

All three of these proposals were awarded beam time in the fall of 2017 and LLNL team members participated and helped execute these beam times. The article published in Nature Communications describes the setup and results from the first of these beam times.

"It was very exciting to be part of the first-ever biological imaging beam time at the European XFEL and to work together with some of our long-standing collaborators and former colleagues from LLNL who are now at DESY/CFEL, including Henry Chapman and Anton Barty," said Frank, a physicist in the LLNL Bioscience and Biotechnology Division (BBTD) and Physical and Life Sciences (PLS), who is developing instrumentation and technologies for biosecurity and biomedicine.

It is interesting to note that our team included quite a number of the same people who performed the first biological imaging experiments at the Linac Coherent Light Source (LCLS), the XFEL here at the SLAC National Accelerator Laboratory, when that facility opened up in 2009. That work then resulted in a Nature paper (Chapman, et al., Nature 2011) that has been cited more than 1,000 times by now. We hope this work published in Nature Communications will have a similar impact in the field."

Megan Shelby, a postdoc in BBTD and PLS, whose background is in X-ray spectroscopy and X-ray methods, noted that available beamtime at XFELs is very limited compared to more conventional types of X-ray sources.

"That we now have access to not only a whole new facility but one with a much faster data acquisition rate is big news, especially with the closure of LCLS over the next year to begin construction of LCLS-II," Shelby explained. "That the feasibility of these high-repetition-rate experiments is proven opens up a lot of exciting opportunities for us and for other scientists around the world."

The European XFEL is designed to deliver X-ray flashes every 220 nanoseconds. To unravel the three-dimensional structure of a biomolecule, such as an enzyme, the pulses are used to obtain flash X-ray exposures of tiny crystals, or microcrystals, grown from that biomolecule.

So, to build up the full 3D structure of the biomolecule, a new crystal has to be delivered into the beam in time for the next flash. This is accomplished by continuously spraying microcrystals embedded in a water jet across the path of the X-ray laser and thus continuously replenishing the sample.

Nobody has tried to X-ray samples to atomic resolution at this fast rate before. The fastest pulse rate so far of any such X-ray laser has been 120 flashes per second, that is one flash every 0.008 seconds. To probe biomolecules at full speed, not only must the crystals be replenished fast enough — the water jet also is vaporised by the X-rays and has to recover in time.

"We revved up the speed of the water jet carrying the samples to 100 metres per second, that's about as fast as the speed record in Formula 1," explained Max Wiedorn, who took care of the sample delivery together with his colleague Dominik Oberthür, both from CFEL. A specially designed nozzle made sure the high-speed jet would be stable and meet the requirements.

Also, no one had ever built a detector to record X-ray diffraction patterns at this fast rate. An international consortium, led by DESY scientist Heinz Graafsma, designed and built one of the world's fastest X-ray cameras, tailor-made for the European XFEL.

The Adaptive Gain Integrating Pixel Detector (AGIPD) can not only record images as fast as the X-ray pulses arrive, it can tune the sensitivity of every pixel individually, making the most of the delicate diffraction patterns in which the information on the atomic structure of the sample is encoded.

"The requirements of the European XFEL are so unique that the detector had to be designed completely from scratch and tailored to this task," Graafsma said. "This only could be achieved thanks to the comprehensive expertise and fruitful collaboration of the large team involved."

The scientists first determined the structure of a very well-known sample, the enzyme lysozyme from egg-white, as a touchstone to verify the system worked as expected. Indeed, the structure derived at the European XFEL perfectly matches the known lysozyme structure, showing details as fine as 0.18 nanometers (millionths of a millimeter).

"This is an excellent proof of the X-ray laser's performance," said XFEL pioneer and former LLNL scientist Henry Chapman, a leading researcher at CFEL and a professor at the University of Hamburg. 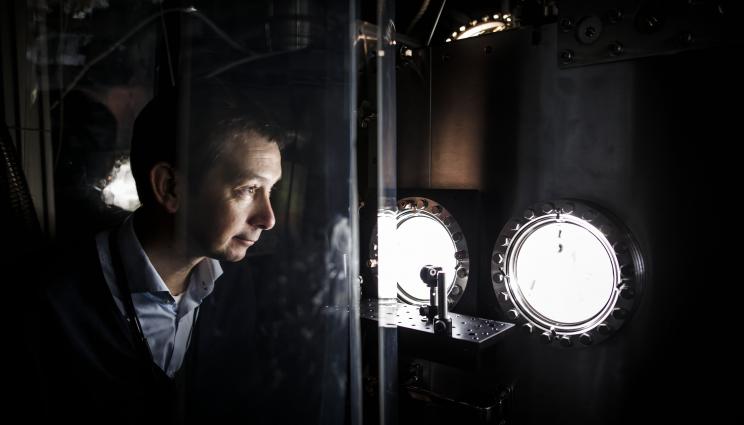 "We are very excited about the speed of the analysis: Experiments that used to take hours can now be done in a few minutes, as we have shown. And the setup that we used can even be further optimized, speeding up data acquisition even more. The European XFEL offers bright prospects for the exploration of the nanocosm," Chapman added.

The striking performance of the X-ray laser also is a particular success of the DESY accelerator division that led to the construction of the world's longest and most advanced linear accelerator driving the European XFEL.

As their second target, the team chose a bacterial enzyme that plays an important role in antibiotic resistance. The molecule, designated CTX-M-14 β-lactamase, was isolated from the bacterium Klebsiella pneumoniae whose multidrug-resistant strains are a grave concern in hospitals worldwide.

Two years ago, even a "pandrug-resistant" strain of Klebsiella pneumoniae was identified in the U.S., according to the Centers for Disease Control and Prevention (CDC), unaffected by all 26 commonly available antibiotics.

The bacterium's enzyme CTX-M-14 β-lactamase is present in all strains. It works like a molecular pair of scissors cutting lactam rings of penicillin-derived antibiotics open, thereby rendering them useless. To avoid this, antibiotics are often administered together with a compound called avibactam that blocks the molecular scissors of the enzyme. Unfortunately, mutations change the form of the scissors.

"Some hospital strains of Klebsiella pneumoniae already are able to cleave even specifically developed third-generation antibiotics," explained Christian Betzel, co-author of the paper and also a professor at the University of Hamburg. "If we understand how this happens, it might help to design antibiotics that avoid this problem."

The scientists investigated a complex of CTX-M-14 β-lactamase from the non-resistant, "wild type" of the bacterium with avibactam bound to the enzyme's active center, a structure that has not been analysed before.

"The results show with 0.17 nanometers precision how avibactam fits snug into a sort of canyon on the enzyme's surface that marks its active center," said Markus Perbandt from the University of Hamburg, also a co-author of the paper. "This specific complex has never been seen before, although the structure of the two separate components were already known."

The measurements show that it is possible to record high-quality structural information, which is the first step toward recording snapshots of the biochemical reaction between enzymes and their substrates at different stages with the European XFEL.

Together with the research group of co-author Martin Aepfelbacher and Holger Rohde, professors at the University Hospital UKE in Hamburg, the team plans to use the X-ray laser as a film camera to assemble those snapshots into movies of the molecular dynamics of avibactam and this β-lactamase.

"Such movies would give us crucial insights into the biochemical process that could one day help us to design better inhibitors, reducing antibiotics resistance," Betzel said.

Movies of chemical and biochemical reactions are just one example of a whole new spectrum of scientific experiments enabled by the European XFEL. A key factor is the speed at which data can be collected.

"The difference in rate of discovery possible using European XFEL demonstrated by this experiment is as dramatic as the difference in travel time between being able to catch a plane across the Atlantic rather than taking a ship. The impact is potentially enormous."

The European XFEL in the Hamburg area is a new international research facility open to research groups from around the world. The Center for Free-Electron Laser Science (CFEL) is a cooperation of the University of Hamburg, the Max Planck Society and DESY.  DESY is one of the world’s leading particle accelerator centers.