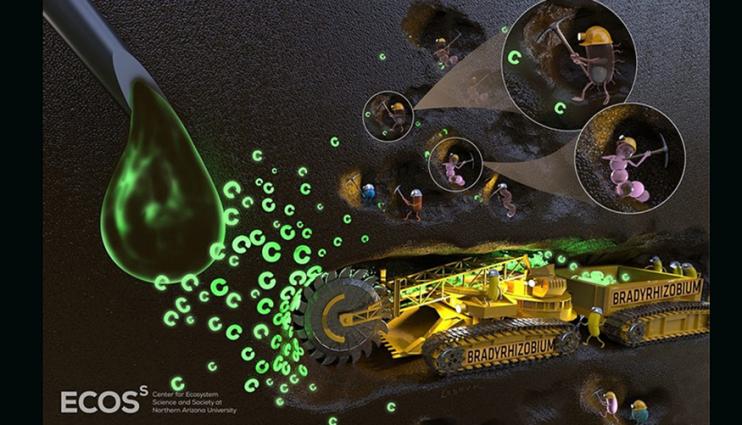 Bacterial “miners” shown in relief working to process soil nutrients, some more efficiently than others. Bradyrhizobium is shown here consolidating its control of carbon from a glucose addition, processing the nutrients with industrial efficiency (in the form of a bucket wheel excavator). Image courtesy of Victor O. Leshyk/ Center for Ecosystem Science and Society, Northern Arizona University.

Just a few bacterial groups found in ecosystems across the planet are responsible for more than half of carbon cycling in soils, according to new findings from researchers at Lawrence Livermore National Laboratory (LLNL) and Northern Arizona University, published in Nature Communications.

The new research suggests that despite the diversity of microbial taxa found in wild soils gathered from four different ecosystems, only three to six groups of bacteria common in these ecosystems were responsible for most of the soil carbon use.

Soil contains twice as much carbon as all vegetation on earth, and so predicting how carbon is stored in soil and released as CO2 is a critical calculation in understanding future climate dynamics. The research team, which included scientists from Pacific Northwest National Laboratory (PNNL), University of Massachusetts-Amherst and West Virginia University, is asking how such key bacterial processes should be accounted for in earth system and climate models.

“In soils amended with glucose, bacteria that used the most glucose-derived carbon also were those that used the most native soil carbon, meaning that the behavior of a small group of key taxa may influence the system’s overall carbon balance,” said LLNL scientist Jennifer Pett-Ridge, a co-author of the paper and head of LLNL’s DOE Scientific Focus Area looking at the soil microbiome. “Mapping carbon flow through different microbial groups is crucial in developing taxon-sensitive soil carbon models that may reduce the uncertainty in climate change projections.”

“The sequencing era has delivered incredible insight into how diverse the microbial world is,” said Bram Stone, a postdoctoral researcher at the Center for Ecosystem Science and Society at Northern Arizona University who led the study and is now at Pacific Northwest National Laboratory. “But our data suggest that when it comes to important functions like soil respiration, there might be a lot of redundancy built into the soil community. It’s a few common, abundant actors who are making the most difference.”

Those bacteria – Bradyrhizobium, the Acidobacteria RB41 and Streptomyces — were better than their rarer counterparts at using both existing soil carbon and nutrients added to the soil. When carbon and nitrogen were added to soils, these already dominant lineages of bacteria consolidated their control of nutrients, gobbling up more and growing faster relative to other taxa present. Though the researchers identified thousands of unique organisms, and hundreds of distinct genera (collections of species), only six were needed to account for more than 50 percent of carbon use, and only three genera were responsible for more than half the carbon use in the nutrient-boosted soil.

Using water labeled with a heavy isotope of oxygen (18O) as a tracer, Pett-Ridge and LLNL's Steven Blazewicz and the team sequenced DNA found in the soil samples, following the oxygen isotopes to see which taxa incorporated it into their DNA, a signal that indicates growth. This technique, called quantitative stable isotope probing (qSIP), allows scientists to track which bacteria are growing in wild soil at the level of individual taxa. Then the team accounted for the abundance of each taxon and modeled how efficiently bacteria consume soil carbon. The model that included taxonomic specificity, genome size and growth predicted the measured CO2 release much more accurately than models that looked only at how abundant each bacterial group was. It also showed that just a few taxa produced most of the CO2 that the researchers observed.

“Better understanding how individual organisms contribute to carbon cycling has important implications for managing soil fertility and reducing uncertainty in climate change projections,” said Kirsten Hofmockel, Microbiome Science Team Lead at PNNL and a co-author of the study. “This research teases apart taxonomic and functional diversity of soil microorganisms and asks us to consider biodiversity in a new way.”

Research conducted at Lawrence Livermore National Laboratory was supported by the Department of Energy Office of Science. 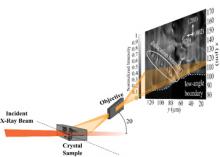