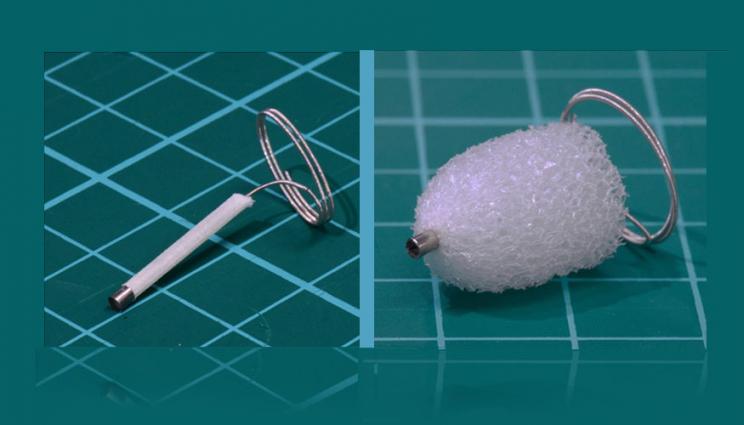 The Food and Drug Administration has approved the use of a medical device in humans for deliberately blocking blood flow to treat bleeding abnormalities or other conditions, a procedure known as embolization. The device integrates expanding shape memory polymer technology that was partly developed at Lawrence Livermore National Laboratory (LLNL).

The FDA recently granted Shape Memory Medical, a company founded by former LLNL scientist Duncan Maitland, with clearance for its IMPEDE® embolization plug, designed to block or reduce blood flow in peripheral vasculature. The device can be "programmed" into a particular shape, made thin enough to fit in a catheter and expand to its former shape when exposed to stress or heat. The advantages of IMPEDE®, Maitland said, include simple delivery through any diagnostic catheter, ease of navigation through twisted blood vessels and quick, stable embolization without compromising the vessel wall.

Much of the technology behind the device was developed at LLNL, and later at Texas A&M University, through multiple grants and investments from the Department of Energy’s Office of Science, National Institutes of Health and Laboratory Directed Research and Development, dating back to the 1990s. Over the years, it has involved the work of dozens of Lab scientists, Ph.D.s and graduate students who researched materials and designed biomedical devices that could better occlude blood clots and help prevent hemorrhagic stroke. In 2003, the work expanded to include shape memory devices that could cut blood supply to certain areas of the peripheral vasculature for treatment of aneurysms. LLNL has numerous patents on the technology.

Researchers said the device has immense potential to replace current embolization technology, which generally employs metal coils that occasionally tear through walls of the blood vessels and lead to further complications such as hemorrhaging. Shape memory foams can be made thin enough to be inserted into blood vessels and arteries, and once in place, expand either on a time-release basis or when heated by the blood to seal up vessels and arteries and allow for healing tissue to develop.

"It’s an entry point for the technology," said LLNL staff researcher Thomas Wilson, who has been working on materials for biomedical devices for more than a decade. "This (FDA approval) is a tremendous hurdle, and what’s been achieved will open the doors to other shape memory devices. This is the baby step. It’s a huge satisfaction to actually see this come to fruition and see it help people."

The LLNL team, working under a series of NIH grants that began in 2003, tested materials that would not only be thin enough to fit through a catheter but would have enough attenuation or "bounce-back" properties to allow it to expand quickly to completely fill the vein or artery. Maitland, who spent more than a dozen years at LLNL, left the Lab to become a professor at Texas A&M University. Under a cooperative research and development agreement (CRADA) with the Lab, development of the devices continued at Texas A&M. Maitland founded his company as Shape Memory Therapeutics Inc. and completed animal testing to support application in humans. The company changed its name and is headquartered in Santa Clara, California.

"Approximately 20 years ago, Tom and I envisioned a new way to occlude vessels," Maitland said. "Seeing IMPEDE® used to treat patients that would be otherwise untreatable with current technologies is an engineer’s dream outcome. I am very grateful to the many people that have participated in and supported this work."

‘Decades’ of development at LLNL

LLNL scientist Jennifer Rodriguez started her work on shape memory polymers for medical devices as an undergraduate at the Lab in 2005, leaving several years later to work with Maitland at Texas A&M on a Ph.D., and returned to Livermore as a postdoc in 2014. Because the polymer materials used in the foam are low density and don’t absorb X-rays, Rodriguez worked on ensuring the devices would show up in medical imaging and engineered the foam material with channels so blood could pass through them and allow the body to begin the healing process.

"It’s taken decades to get where they are, from developing the polymers to designing devices to creating the devices," Rodriguez said. "It’s rewarding to have worked on something that now has the potential to help somebody and advance health care."

LLNL engineer Ward Small began working on the materials in 2003, fabricating catheter-based devices and discovering how to get them to actuate or expand under laser light. The biggest challenge, he said, was to achieve enough expansion and coming up with a way to detach it from its wire guide, deliver it precisely to the affected area and have it stay in place.

"The goal from the beginning was to actually see this come to fruition," Small said. "We were hopeful, but it took a long time. It’s awesome that something that started here is on its way."

Among the many contributors who worked on related projects included Lawrence Scholars Pooja Singhal, Keith Hearon, Jason Ortega and John Horn, as well as numerous students from UC Davis.