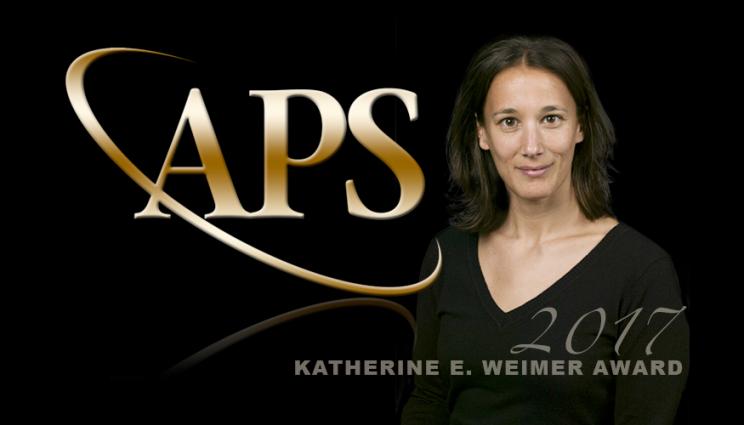 Lawrence Livermore National Laboratory physicist Félicie Albert received the 2017 Katherine E. Weimer Award by the American Physical Society, Division of Plasma Physics (DPP). The award will be presented during the DPP annual meeting the week of Oct. 23-27 in Wisconsin.

Albert was awarded "For pioneering development and characterization of X-ray sources from laser-wakefield accelerators and Compton scattering gamma-ray sources for applications in high energy density science and nuclear resonance fluorescence."

"I feel honored and humbled to have received this award because I join a list of previous recipients who I respect a lot," Albert said. "It encourages women to have thriving careers in physics. I am grateful to the American Physical Society, Division of Plasma Physics for doing that. Perhaps the most important of it all is that although this is an individual award, I would never have received it without the support of my many colleagues and mentors. From mentors who have guided me to my group leader who nominated me, to my colleagues at the Lab who have been through tough experiments, lively scientific discussions and paper writing sessions with me, I have had an incredible support system that led to this recognition."

The award honors Katherine Weimer, a pioneering research physicist at the Princeton Plasma Physics Laboratory at Princeton University, and was established by DPP to recognize and encourage outstanding achievement in plasma science research by a woman physicist in the early years of her career.

Albert, an expert in ultrafast X-ray sources and laser-plasma interactions, joined the Lab as a postdoctoral researcher in 2008. She was selected by APS as an outstanding referee in 2015. Albert received an Early Career Research Program award from the Office of Fusion Energy Sciences in 2016. Her research has been funded by the Lab’s Laboratory Directed Research and Development program and the Department of Energy’s Office of Science and Office of Fusion Energy Sciences.