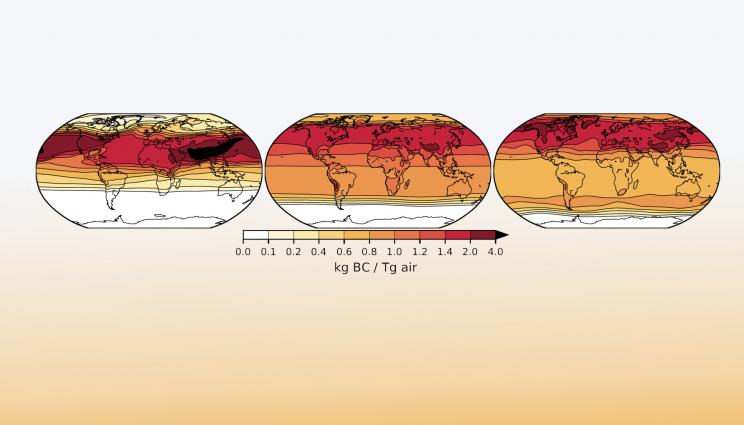 Atmospheric black carbon is shown at one month (left), six months (middle) and 12 months after the nuclear exchange.

A team of Lawrence Livermore National Laboratory (LLNL) researchers has found that the global climatic consequences of a regional nuclear weapons exchange could range from a minimal impact to more significant cooling lasting years.

The five LLNL scientists examined the potential for global climate changes from large urban fires ignited in a hypothetical regional nuclear exchange of 100 15-kiloton nuclear weapons between India and Pakistan.

This scenario, which has been examined in several other recent studies, was evaluated by Lab scientists using two high-fidelity models for the first time and took new factors into account.

“One of the new aspects of our work is that we examined the dependence of the climate effects on different amounts of fuel available at the location of the detonation and subsequent fire,” said LLNL mechanical engineer Katie Lundquist, the leader of the study and a co-author of the team’s paper.

The team considered a range of possibilities for fuel loading at the site of the fire and plume characteristics, such as smoke composition and aerosol properties, resulting in an improved understanding of model sensitivity to these factors.

The team’s paper was published last week in the Journal of Geophysical Research: Atmospheres, a publication of the American Geophysical Union.

It is believed that if the detonation of multiple nuclear weapons causes large fires, the smoke emission could block sunlight and affect the global climate.

In their study, the Livermore scientists simulated the global climate impact using new models for predicting the fire-driven plumes of soot to the top of the troposphere and beyond. They found that when smoke from the fires remains in the lower troposphere (which has a height of about six to 11 miles), it is quickly removed and the climate impact is minimal.

However, when fires inject smoke into the upper troposphere or higher, more smoke is transported to the stratosphere (the layer from the troposphere up to a height of about 30 miles), where enough light is blocked to cause global surface cooling.

“Our simulations show that the smoke from 100 simultaneous firestorms would block sunlight for about four years, instead of the eight to 15 years predicted in other models,” the Livermore researchers wrote.

They believe that in this case, the blocked sunlight would likely cause a 1 to 1.5 degrees Kelvin global average peak cooling for about four years, Lundquist said.

In studying fuel load impact on the global climate, the team found that if there were only fires in suburban areas, there would be little to no effect on the climate. Conversely, they concluded that fires in densely populated urban areas could produce a cooling three times the impact of the 1991 eruption of the Mount Pinatubo volcano in the Philippines.

This study represents the first time the higher-resolution E3SM system, developed by the Department of Energy’s (DOE) Office of Science, has been applied to look at the climate effects of a nuclear weapons exchange.

Lee Glascoe, another co-author of the journal paper and the leader of the Lab’s National Atmospheric Release Advisory Center (NARAC), said the two-year study showed that there is still much uncertainty about the global climate impact of a regional nuclear weapons exchange.

“Previous research has been inconclusive about what the consequences might be for the global climate from a regional nuclear weapons exchange,” Glascoe said. “This paper highlights that many localized processes, such as fuel density and fire intensity, could drive the global results.”

This also is the first time, Glascoe noted, that LLNL scientists from NARAC and the Climate Program have collaborated on a scientific study.

In addition to Lundquist and Glascoe, other authors of the papers are atmospheric scientist Qi Tang; David Bader, the Climate Program leader; and Benjamin Wagman, a postdoc now on staff at Sandia National Laboratories in New Mexico.