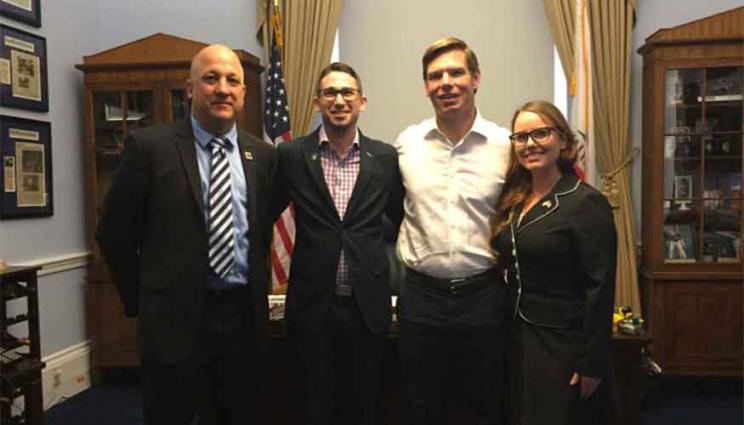 U.S. Marine veteran Destiny Goddu has spent her whole life working with machines. As a young girl growing up in Livermore, she helped her father, a mechanic, disassemble and rebuild car engines and tinkered with auto parts in the family garage. After joining the Marines, she worked on missile guidance systems, and as a Lab employee, hired part-time through the award-winning Veterans to Technology program, she builds X-ray sources that verify diagnostic operations prior to being fielded on the National Ignition Facility.

Earlier this month, the nonprofit Valley Veterans Foundation recognized Goddu’s dedication and perseverance with a $10,000 scholarship for women veterans in science,technology, engineering and math (STEM). Goddu said the money will help her finish her degree at Las Positas College and further her education in engineering.

"I’ve worked very hard," Goddu said. "Between math and physics, it’s pretty intense, especially when you’re working. There aren’t a lot of women in STEM careers and women veterans in STEM are even more rare. To have this (scholarship) go toward that is huge. I’m very fortunate and really thankful to everyone involved."

In the Marines, Goddu was an aviation electrician and worked on forward looking infrared guidance systems deployed on cargo ships (or used on the F-18 fighter jet). When she arrived at the Lab to begin her 10-week internship last summer, she was immediately tossed into building a Multi-Anode Manson Source (MAMS), a DC X-ray source, that verifies diagnostic response, ensuring these instruments are ready and capably of acquiring data on NIF experimental shots. She built the entire machine from the ground up, using an older system as a basic template and bringing its vacuum control systems into the 21st century.

"I came in here not knowing what any of this was. The Marine Corps had manuals and detailed procedures; there is no manual for this configuration," Goddu said. "I really enjoyed the hands-on work. Saving money is my approach so I pulled a bunch of stuff off the shelf and designed some of the parts (using computer-aided design). They really gave me a lot of freedom with it. To have something you build, thinking what is the most efficient way to do it, and see it in use is so cool." 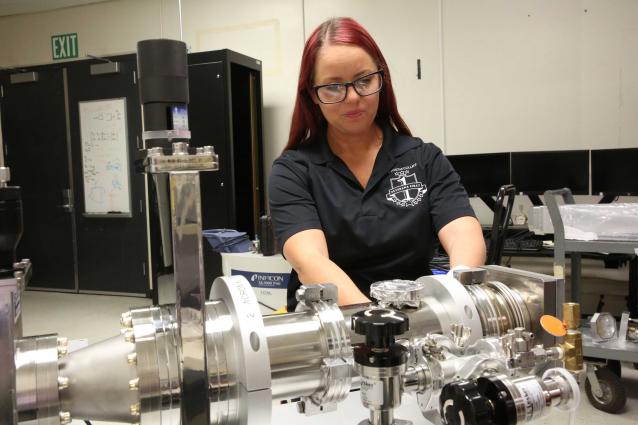 Goddu so impressed her supervisors with her drive, proficiency and ability to catch on to new tasks they kept her on as an indeterminate employee, working one day a week at NIF while she continues her education.

"She’s really strong, and technically very capable," said LLNL Engineering Division Superintendent Ron Darbee. "She has all the intangibles from the Marine Corps, where she’s faced bigger challenges than we could ever provide -- we find that very appealing. Her combination of mechanical and electronics knowledge was perfect for what we needed."

As if work and school wasn’t enough, Goddu has become an activist for student veterans, lobbying legislators with the group Operation Veterans Research Funding. She’s past president of the Student Veterans Organization at Las Positas College and worked at the school’s Veterans Resource Center, which helps get returned veterans connected with their benefits. She’s visited Washington, D.C. to speak with members of Congress and talked to elected officials in Sacramento about funding similar centers at higher learning institutions across California.

"We want resource centers at every community college," Goddu said. "We want a one-stop shop so vets don’t have to worry about any extra stress. I think veterans could benefit from all over the United States."

While Goddu ponders her next move, she’ll continue working at Las Positas on her transfer requirements, and is scheduled to graduate in May with an associate’s degree in engineering technology. She plans to apply to UC Davis and UC Berkeley, with a goal of getting her master’s degree in electrical engineering.