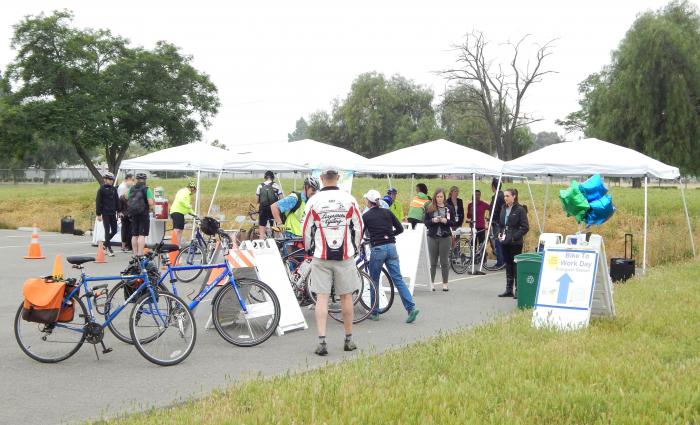 More than 180 LLNL and Sandia employees visited the ‘energizer station’ on their way into work on Bike to Work Day. Photo by Don Johnston/LLNL

Employees get in high gear on Bike to Work Day

The "energizer station" set up Thursday next to the bus stop at Vasco Road and East Avenue drew more than 180 bicycle commuters participating in Bike to Work Day.

This was the first time in recent memory that Lawrence Livermore National Laboratory and Sandia located their station outside the gates in a publicly accessible place. After signing in and registering their commute mileage, riders arriving for work were offered bagels, sliced fruit, water and coffee. A steady stream of Motown hits playing from a portable sound system tempered the damp chill of morning. LLNL’s Cycletrons provided bike repair and maintenance services.

According to the list of those who signed in at the energizer station, round-trip commute distances ranged just one or two miles to 72 miles, with six riders reporting commutes of 40 miles or more.

Chad Hopponen of LLNL had the longest commute from Concord, 37 miles each way. "The ride this morning was actually quite enjoyable. The cooler temps helped and the early morning fog kept the sun out of my eyes as I turned east toward Livermore," Hopponen said.

He also learned a couple of interesting things along the way, including that the Iron Horse Trail has a speed limit of 15 mph. "I was fortunate to only receive a warning."

Paterson said that staff at the energizer station also tabulated bike commuters who did not stop at the station on their way in to the labs. In all, 257 cyclists passed the station on East Avenue between 6:30 and 9:30 a.m.

"This year’s event was a great success thanks to a team effort across Lab and Sandia organizations as well as support from the City of Livermore, Wheels and the East Bay biking community," said Paterson, an ecologist who works in LLNL’s Environmental Function Area.

The event was part of the 22nd annual Bay Area Bike to Work Day. According to the organization’s website, over 62,000 Bay Area residents use a bicycle as their primary transportation to work, and the number appears to be increasing. A San Francisco Municipal Transportation Agency survey showed that between 2014 and 2015, bike commuting increased by 8.5 percent in the S.F. region.