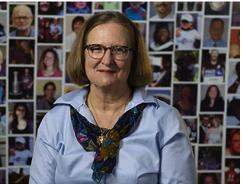 LLNL employee Karen Ballou was selected as a Face of Stroke ambassador in September to raise awareness of atrial fibrilation (Afib) and its connection to stroke risk. Photo courtesy of the National Stroke Association. 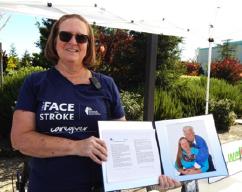 LLNL employee and Face of Stroke ambassador Karen Ballou displays a photo of her and her late husband at a booth onsite at the HOME Run to raise awareness of atrial fibrilation (Afib) and it's connection to stroke risk.

Carrie L Martin, martin59 [at] llnl.gov, 925-424-4715
Editor's Note: This is one in a series of articles about Lawrence Livermore National Laboratory employees who volunteer for various non-profit agencies. This is just a sampling.

Most people are all too familiar with cancer, heart attacks and stroke. However, not all are aware of the condition atrial fibrillation (Afib) and the role it plays in increasing your risk for a stroke. Stroke just recently dropped from the No. 3 cause of death in the United States to No. 4, however, stroke affects many more people than cancer of any sort, and it's also one of the leading causes of disability.

LLNL employee, Karen Ballou is very familiar with Afib and has made it her purpose to raise awareness. Ballou has beenimpactedpersonally by Afib, which is why she was selected as a Face of Stroke ambassador for the month of September by the National Stroke Association in honor of National Atrial Fibrillation Awareness Month.

The Faces of Stroke ambassador program is a public awareness campaign that aims to educate about the connection between Afib and stroke through personal accounts. Ballou is featured in a public service announcement (PSA) that first aired in September and will continue to air through the end of December. The PSA introduces Ballou as a campaign ambassador who has been impacted by Afib and stroke. Her mission is to save lives by educating others about how to keep stroke at bay.

According to the National Stroke Association, "atrial fibrillation (is a type of irregular or 'racing' heartbeat that can cause blood to collect in the heart and potentially form a clot, which can travel to a person's brain and cause a stroke or brain attack. This condition increases a person's risk for stroke by 500 percent."

Ballou was personally impacted because it hit close to home when her husband had a stroke. Ballou met her husband Harold Swartz in 1998. He was a retired army staff sergeant, an active member of the Contra Costa County Sheriff Reserve and an employee in the security department at LLNL. Not long after they met, Swartz was diagnosed with Afib. They were married in 2005 and were enjoying an active life together until Swartz suffered a stroke in 2006. Friends, family and co-workers provided emotional support to Ballou during this time. While Ballou continued working, her primary focus became that of caregiver not only for her husband, but other family members as well. In 2008, her aging parents moved closer so that she could provide caregiving support for them.

Ballou was involved in aiding her husband's recovery until sadly, in 2009, Swartz passed away due to complications after open heart surgery.

Just a few years later in 2012, Ballou's mother passed away shortly after being diagnosed with mesenteric cancer (a very rare form of cancer).

Ballou has a brother battling thymoma, another very rare form of cancer and her father, currently 92 years old, has had intermittent Afib since his early 20s. In 1989, her father suffered a stroke, however he was lucky because it was considered minor and presented few after effects.

Caregiving for family, especially the elderly, can be a real challenge. Coming up to speed on a condition that is largely misunderstood (e.g., stroke) and all the nuances in behavior, thought processes and movement that can occur after a stroke can be overwhelming. Coming up to speed on cancer, especially the rare forms of cancer, also can be challenging. Then knowing that as caregiver, you are making decisions that affect another person's treatment, and possibly lifesaving/ending decisions, are ones that can affect you for the rest of your life, Ballou said.

Ballou knows first-hand the impact of life-threatening experiences. "It does not affect just the person, or their family. It creates ripples through friends, acquaintances and fellow workers. It also can be isolating, as people are unsure how to deal with someone that has had a brain injury, such as a stroke," she said.

Ballou credits the Lab and its programs for easing the burden. "Working at the Laboratory has been a very large blessing in my life, as the focus on balance between work and family life is one of the strong points of the Lab. My life would have been much more difficult without the support of my supervisor, manager, division/program management and directorate management. The catastrophic leave program and the employees that donate to it are angels," she said.

Ballou also is thankful for the Helping Others More Effectively (HOME) Campaign and the $1 million that Lawrence Livermore National Security (LLNS) provides to match employee donations each year. It provides her with the opportunity to give back to various organizations that are near to her heart, such as the National Stroke Association and organizations providing support to veterans.

Ballou has worked at LLNL since 2000 and is currently a Technical Release Representative (TRR) for B Division in WCI. She is very active as a board member in the Lawrence Livermore Lab Armed Forces Veterans Association (LLLAFVA) and has volunteered at several Stand Down events in honor of her husband. Ballou also participates as her schedule allows in the caregivers' support group on site, which meets on the third Wednesday of the month at lunchtime.

For information about stroke/Afib awareness, the LLLAFVA or the caregivers' support group contact ballou3 [at] llnl.gov (Karen Ballou).

Saving lives one bark at a time