The licensing of this self-contained detector for high explosives to a small Florida-based startup is one of many tech-transfer deals brokered by the Industrial Partnerships Office at the Lawrence Livermore National Laboratory. Today, ELITE is used by law-enforcement and military personnel throughout the U.S. and in several foreign countries. 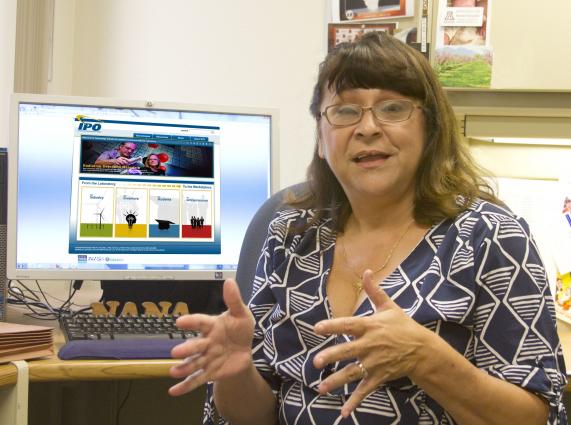 Catherine Elizondo is a business development executive in LLNL's  Industrial Partnerships Office who has been "marrying" Lab technologies to U.S. businesses for 16 years. Photo by Julie Korhummel/LLNL

Lab scientists and engineers, as well as U.S. businesses, often turn to people like Catherine Elizondo.

Elizondo, a business development executive (BDE) in the Laboratory's Industrial Partnerships Office (IPO), has been "marrying" Lab technologies to U.S. businesses for 16 years.

"It's challenging, it's satisfying, and I learn something new every day," Elizondo says of her work.

While she likes her job, the best part is the people she works with -- from the Lab researchers who develop the technologies to the business people who use and commercialize the LLNL research and development advances.

In her view, the relationships she has nurtured with Lab scientists and engineers, and leaders from different companies, are the key to success in the tech transfer field.

"A very important part of marketing is my relationships with the Lab principal investigators and inventors. They give me contacts and I then work closely with our program leaders to analyze the best path forward for business development, research and development and the technology transfer mission," Elizondo said.

"One of the challenges with this job is that the technology or business relationships don't always start at the same place. That means I have to rely on my relationships just to know what our scientists and engineers are doing in their labs with their projects."

She also stays in regular communication with her contacts at a host of different companies, so she knows if she has an LLNL technology that might meet their needs.

It's paid off for her, for Lab researchers and for a number of companies.

In 2010, she concluded a record six patent technology licenses and two patent option agreements with various companies. The next year, she was named the Federal Laboratory Consortium 's "Technology Transfer Professional of the Year" for the Far West Region.

"Picking a favorite license or project is a little bit like picking your favorite child," Elizondo offered. "It's hard because I enjoy different aspects of each license, each technology and each challenge. They're all different."

Still, there are two or three deals from earlier years in her career that stand out for her. One is the 2005 licensing of an explosives detection technology, dubbed the Easy Livermore Inspection Test for Explosives (ELITE), to a small Florida-based startup called Field Forensics Inc.

"With ELITE, it was a great pleasure to see the technology mature in the marketplace and watch the company grow from one employee (its president) to 11 employees," Elizondo said. "It also was memorable to see ELITE briefly shown on the network television series, CSI Miami."

Today, Field Forensics Inc. has about 200 customers, including the FBI, NATO special forces, the militaries of at least six nations (the United States, Great Britain, Spain, Germany, Australia and Canada), the South Korean police and all the nuclear power plants in Canada. To date, more than 100,000 ELITE units have been sold.

Lab chemist John Reynolds, who led the development of ELITE when he was with the Forensic Science Center, calls Elizondo a "true pleasure to work with on licensing projects.

"She's incredibly professional and she made the process go very smoothly. I hold her in the highest regard. And the real measure for ELITE is that it is helping our soldiers in the field, making them safer and helping them do their job," Reynolds said.

Another technology that has been a highlight of Elizondo's career is the licensing of a hand-held gamma ray detector called the "Detective" to Tennessee-based AMETEK (Advanced Measurement Technology Inc.)/ORTEC.

"That license was special because it was a quick turnaround to put Livermore technology into the hands of first-responders after 9/11," Elizondo says.

Developed by retired Lab physicist Mark Rowland, the "Detective" serves as the first portable mechanically cooled, high-purity germanium-based detector of its kind and has been deployed all over the world. Used in shipping ports or border crossings or by emergency-response personnel, the "Detective" can quickly discriminate between nuclear materials and harmless sources of radiation. To date, hundreds of "Detective" systems have been sold, according to ORTEC.

"ORTEC acknowledges the great value in the opportunity to work with Catherine in her business development role at LLNL," said Dave Martinez, the West Coast representative for ORTEC. "She continues to be instrumental in providing ORTEC access to technologies, furthering the development of commercial products."

QuantaLife grew from its four founders to more than 60 employees by 2011. In that year, Bio-Rad Laboratories, a multi-national manufacturer and distributor of life science and clinical diagnostics products, purchased the firm for $162 million.

"My work is challenging. You have to understand going in that a large percentage of my time consists of ground work that may or may not result in a license or a business deal," Elizondo explained.

Elizondo's objective in negotiating deals with businesses, she says, is for both parties to walk away from the table and feel good about the deal.

"I'm excited about my role in supporting NIF. I have an office in Bldg. 482 and I'm located in the program to better support their needs," she said. "There are a number of NIF technologies that have excellent potential for commercialization and a number of opportunities to work with private industry."

As the focal point for industrial interactions, the Laboratory's Industrial Partnerships Office helps LLNL enhance the competitiveness of U.S. industry and assists in promoting the economic health of industry in the region and state. IPO works with technologies in advanced manufacturing, chemistry and materials science, energy and environment, life sciences, and biotech and healthcare, among others.

Before coming to work at LLNL, Elizondo worked for 20 years for the federal government, first as a submarine designer and then as a weapons program manager for the departments of Defense and Energy. She holds a bachelor's of science degree in mechanical engineering from UC Berkeley.

"Economic competitiveness is important to me. I like to see LLNL technologies commercialized by U.S. companies to create jobs in the marketplace," Elizondo said.

It's no wonder she enjoys her job.