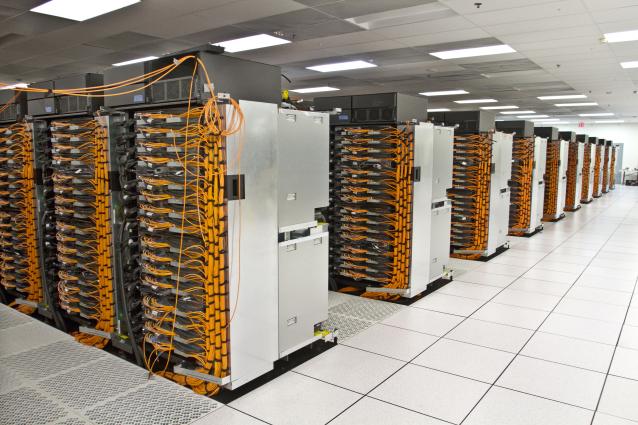 Sequoia, a world-class IBM BlueGene/Q computer sited at LLNL for the National Nuclear Security Administration (NNSA), is exploring a broad range of science to shakeout the machine and fully develop the capabilities the system will require to fulfill its national security missions, starting early next year.

The early science runs are part of the "shakeout" of the 20-petaflop peak IBM BlueGene/Q system, which will transition in March 2013 to classified work for NNSA's Advanced Simulation and Computing (ASC) program, a cornerstone of the effort to ensure the safety, security and effectiveness of the nation's nuclear deterrent without underground testing (stockpile stewardship). Sequoia's mammoth computational power will be used to assess physical weapons systems and provide a more accurate atomic-level understanding of the behavior of materials in the extreme conditions present in a nuclear weapon.

"The early science runs are critical to the success of classified work to which the machine will be dedicated early next year," said Michel McCoy, head of LLNL's ASC program. "These codes represent the first big test of the machine and allow us to explore Sequoia's range and parameters. We accomplish important science for NNSA and in the process get a sense of what Sequoia is capable of doing."

Early unclassified work on the machine allows Livermore researchers and IBM computer scientists to work out the bugs and optimize the system before it transitions to classified work and the limited access and security that entails. Los Alamos National Laboratory researchers will run asteroid and turbulence simulations, and Sandia National Laboratory scientists will explore the properties of tantalum on Sequoia.

Initial efforts by Livermore scientists include a QBox first principles molecular dynamics code examination of the electronic structure of heavy metals, research of interest to stockpile stewardship. Qbox was developed at LLNL to perform large-scale simulations of materials directly from first-principles, allowing scientists to predict the properties of complex systems without first having to carry out experiments.

In addition, LLNL scientists will investigate burn in doped plasmas, exploiting the full capability of Sequoia and the code developed for this purpose. Following a benchmark exploration of the density and temperature dependence of burn in undoped hydrogen plasma, researchers will begin a series of extreme-scale simulations of burn in the presence of small fractions of a percent of high-Z dopants. These studies will be used to deepen scientists' understanding of the effect of dopants on burn, physics that is vital to capsule design for the National Ignition Facility, LLNL's laser fusion experiment.

Sequoia also has demonstrated its amazing scalability with a three-dimensional simulation of the human heart's electrophysiology. Using a code created in a partnership between LLNL and IBM scientists, called Cardioid, researchers are modeling the electrical signals moving throughout the heart. Cardioid has the potential to be used to test drugs and medical devices, paving the way for tests on humans.

Sequoia's power enables suites of highly resolved uncertainty quantification calculations. Uncertainty quantification, or "UQ," is the quantitative characterization and reduction of uncertainty in computer applications through the running of very large suites of calculations that characterize the effects of minor differences in the systems. Sources of uncertainty are rife in the natural sciences and engineering fields. UQ uses statistical methods to determine likely outcomes.

Located in Livermore's TSF computing facility, Sequoia is a resource used by researchers at the three nuclear weapons labs -- Los Alamos, Sandia and Lawrence Livermore national labs. Sequoia was ranked No. 1 on the industry-standard Top500 list of the world's fastest supercomputers in June of this year. The system also was No. 1 on the Green 500, as the world's most energy efficient computer, and No. 1 on the Graph 500, a measure of the ability to solve big data problems -- finding the proverbial needle in the haystack.