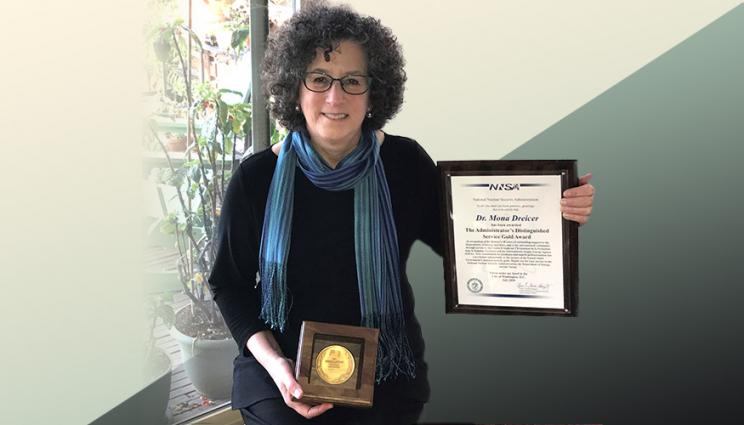 Mona Dreicer, who served as the deputy director of LLNL’s Center for Global Security Research for six years until her retirement in 2020, has been named a recipient of the National Nuclear Security Administration Administrator’s Distinguished Service Gold Award. Photo by Jon Essner

When Mona Dreicer learned she had been tapped to receive one of the National Nuclear Security Administration’s (NNSA) top awards, she had two reactions – she was surprised and she was honored.

The deputy director of the Lab’s Center for Global Security Research (CGSR) for six years until her retirement in 2020, Dreicer has been named a recipient of the NNSA Administrator’s Distinguished Service Gold Award.

“It is the perfect capstone to my career,” Dreicer said.

“I am gratified that NNSA has chosen to recognize Mona in this way," he said. "It is a richly deserved honor. As deputy director of CGSR, Mona played a leading role over the past few years in navigating a major remake of the center.

“She brought enthusiasm and curiosity, wide-ranging expertise and a ready smile to this work. Mona played an especially important role in building up the center’s student program and mentoring newcomers to the Lab,” Roberts added.

As the CGSR’s deputy director, Dreicer helped the center’s interim director, Bruce Goodwin, and then the new director, Roberts, implement and realize their visions for the center.

Another key part of her job was working with two colleagues to edit a book, "Nuclear Nonproliferation and Arms Control Verification," later published by Springer.

Dreicer started her nearly 39-year career at LLNL and after working for three other organizations for 14 years, she returned to the Laboratory.

Since 2003, when she returned, in addition to serving as the CGSR deputy director, she held several other important positions to manage and grow LLNL’s nonproliferation programs.

Dreicer was the program leader for Nonproliferation and Arms Control, led LLNL’s contribution to the U.S.-Russian Federation Laboratory Directors Initiative to develop a cooperative research and development program in 2011-2012 and was the LLNL manager for the Apex Gold event in 2016. The two-day Apex Gold exercise, which attracted ministers and delegates from 37 nations, was the first minister-level gathering to identify potential national and international actions in the event of a nuclear crisis.

During the 14-year interval when she was away from LLNL, she worked for the International Atomic Energy Agency (IAEA) in Vienna, a French radiological protection research center in Paris and the U.S. State Department.

At the IAEA headquarters, from 1989 to 1991, Dreicer served as a project manager on the international Chernobyl project, involving numerous United Nations agencies, to assess radiological consequences from the 1986 Chernobyl nuclear power plant accident to the population in the Union of Soviet Socialist Republics (USSR).

Between 1991 and 1995, Dreicer worked in Paris at the Centre d’etude sur l’Evaluation de a Protection dans le domaine Nucleaire, a center that focused on radiological protection, where she assessed the social costs of nuclear energy.

From 1995 to 2003, Dreicer worked at the State Department, where she was the director of the Office of Nuclear Affairs and the special assistant to the assistant secretary at the Arms Control and Disarmament Agency.

Since retiring, she has been a member of a National Academy of Sciences committee to review capabilities of detection, verification and monitoring of nuclear materials and fissile material.

In March, in one of the biggest adventures of her first year of retirement during COVID-19, she was able to journey to Kenya for two weeks of safari at several nature conservancies dedicated to protecting black rhinos and elephants.

In addition to these endangered animals, she was able to see and photograph lions, leopards, cape buffalo, zebra, hippos, giraffes, hyenas, jackels and birds ranging from ostriches to the Kenyan national bird, the lilac-breasted roller.

“I scheduled this trip three years ago and I didn’t know if it would go forward, but it did," she said. "The people in Kenya were very happy to see us because they hadn’t had tourists for the past year.”

Dreicer’s successor as deputy director of CGSR is Michael Albertson, who joined the Lab in October, following stints at the departments of Defense and State and on the National Security Council.

Dreicer is the fourth Global Security Principal Directorate employee within the past five years to be tapped as a recipient of the NNSA Administrator’s Distinguished Service Gold Award, joining John Nasstrom, Jay Zucca and George Anzelon.