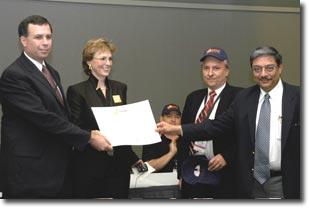 From left, Dimitri Kusnezov of the National Nuclear Security Administration, Dona Crawford, LLNL associate director for computation, Horst Simon of the Top500 List, and Tilak Agerwala, a vice president at IBM, at the Top500 press conference at Supercomputing 2004 in Pittsburgh last November. IBM developed the innovative BlueGene/L system, which requires a fraction of the power and floor space of previous supercomputers, in collaboration with Laboratory researchers who willuse the system.

Dona Crawford, the associate director of Lawrence Livermore National Laboratory’s Computation Directorate, has been named to the Alameda County Women’s Hall of Fame as Outstanding Woman of the Year. Crawford will receive her award, along with eight other winners, on Saturday, March 26, during a special ceremony at the Oakland City Center.

Crawford, who is receiving her award in the Science category, will be honored for her work and her leadership in establishing the world’s fastest supercomputer, called Blue Gene/L, at Lawrence Livermore.

"I am honored to accept this award on behalf of the large team of scientists and engineers at the Lab, at IBM (BlueGene/L’s developer) and at DOE/NNSA (U.S. Department of Energy/National Nuclear Security Administration) who made it possible," Crawford said. "Such an accomplishment is an amazing feat in and of itself. It’s even more rewarding because of its significance and importance to the Laboratory and its missions."

Last November, Blue Gene/L took center stage in the technological world when the international and highly competitive supercomputing industry proclaimed the Laboratory’s Blue Gene/L as the world’s fastest computer on the Top500 list . At 70.72 teraflops, or trillion operations per second, performed on the industry standard LINPACK benchmark, Blue Gene/L outpaced the previous top performer, Japan’s Earth Simulator, which had held the top spot for three years. Blue Gene/L was just one quarter of its eventual capability, yet was still much faster than the Earth Simulator. Since that time the second quarter of the machine has been installed and has achieved 135.3 teraflops on LINPACK.

BlueGene/L will be used to ensure the safety and security of the nuclear stockpile and also set the stage for myriad scientific breakthroughs in chemistry, physics, engineering, medicine and materials science.

Crawford is the fourth woman at the Lab to be inducted into the Women’s Hall of Fame. Previous winners include scientists Claire Max, Ellen Raber and Tammy Jernigan. This is the third consecutive year the Laboratory has an inductee into the Hall of Fame.

Crawford joined Lawrence Livermore in 2001. As associate director of Computation, she is responsible for the development and deployment of integrated computing and information environments capable of terascale simulations. It is through Crawford’s technical skills and leadership that the Laboratory’s Computation Directorate has sustained its preeminence in high-performance computing capability/environments. The Laboratory’s Thunder ranks No. 5 on the Top500 list of supercomputers, and this summer the Lab will begin installation of ASC Purple, a 100 teraflop machine.

"These machines are the backbone of science and technology," Crawford said. "The simulations performed on these machines will aid scientific discovery in many fields for decades to come."

Prior to joining LLNL, Crawford spent 25 years in computer science at Sandia National Laboratories in Livermore and New Mexico. She helped found the Virtual Laboratory Testbed (originally known as the National Information Infrastructure Testbed, or NIIT). NIIT provided reliable and practical experience along with real data in support of then-President Clinton’s initiative for the National Information Infrastructure. In 1992, this was a precursor to commerce on the Internet.

Crawford holds a bachelor’s degree in mathematics from Redlands University and two master’s degrees, one in operations research from Stanford University, the other in German from Middlebury College and Mainz, Germany, Campus. She has served on several advisory committees for the National Science Foundation, the National Research Council and the Council on Competitiveness, is on the Civilian Research and Development Foundation Board, and is a member of the Institute of Electrical and Electronics Engineers and the Association for Computing Machinery.

She also promotes math and science careers for young women in the Tri-Valley area through her participation in community outreach activities such as the Expanding Your Horizons conferences held three times each year, the Go Figure Math Competition and numerous high school achievement awards.