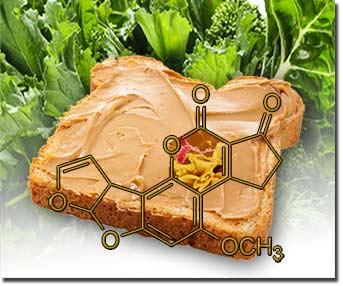 Photo-illustration depicts the relationship between aflatoxin B1, and healthy greens.

Don't forget to eat your greens

Not only are the vitamins and minerals good for you, but eating greens could also save your life, according to a recent study invoving scientists from Lawrence Livermore National Laboratory (LLNL).

LLNL researchers Graham Bench and Ken Turteltaub found that giving someone a small dose of chlorophyll (Chla) or chlorophyllin (CHL) — found in green leafy vegetables such as spinach, broccoli and kale — could reverse the effects of aflatoxin poisoning.

Aflatoxin is a potent, naturally occurring carcinogenic mycotoxin that is associated with the growth of two types of mold: Aspergillus flavus and Aspergillus parasiticus . Food and food crops most prone to aflatoxin contamination include corn and corn products, cottonseed, peanuts and peanut products, tree nuts and milk.

Bench and Turteltaub, working with colleagues from Oregon State University and an industry partner, Cephalon Inc., found that greens have chemopreventive potential.

Aflatoxins can invade the food supply at anytime during production, processing, transport and storage. Evidence of acute aflatoxicosis in humans has been reported primarily in developing countries lacking the resources to effectively screen aflatoxin contamination from the food supply. Because aflatoxins, particularly aflatoxin B1 (AFB1), are potent carcinogens in some animals, there is interest in the effects of long-term exposure to low levels of these important mycotoxins on humans.

The study used AMS to provide aflatoxin pharmacokinetic parameters previously unavailable for humans, and suggest that chlorophyll and chlorophyllin co-consumption may limit the bioavailability of ingested aflatoxin in humans, as they do in animal models, according to Bench.

Exposure to environmental carcinogens has been estimated to contribute to a majority of human cancers, especially through lifestyle factors related to tobacco use and diet. Notable examples are the tobacco-related carcinogens; heterocyclic amines produced from sustained, high-temperature cooking of meats; and the fungal food contaminants aflatoxins.

"What makes this study unique among prevention trials is, that we were able to administer a microdose of radio-labeled aflatoxin to assess the actions of the carcinogen directly in people. There was no extrapolation from animal models which often are wrong," Turteltaub said.

The research, which is co-funded by the National Institutes of Health’s National Resource for Biomedical Accelerator Mass Spectrometry, appeared in the December issue of the journal, Cancer Prevention Research .