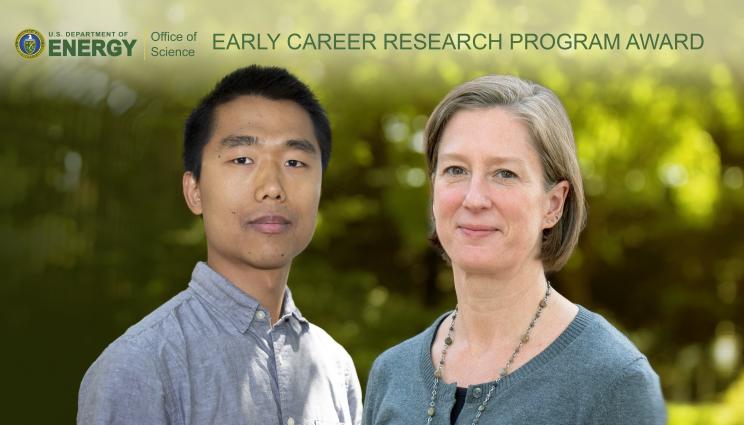 Jingke Xu and Kathryn Mohror are among the 73 scientists nationwide who were selected for the recognition. Under the program, typical awards for DOE national laboratory staff are $500,000 per year for five years.

"Supporting our nation’s most talented and creative researchers in their early career years is crucial to building America’s scientific workforce and sustaining America’s culture of innovation," said Secretary of Energy Rick Perry. "We congratulate these young researchers on their significant accomplishments to date and look forward to their achievements in the years ahead."

Xu, a physicist in LLNL’s Nuclear and Chemical Sciences Division, was selected for his work in high energy physics, and Mohror, a computer scientist in the Lab’s Center for Applied Scientific Computing (CASC), was selected for her work in advanced scientific computing research.

Xu, who is a particle physicist and specializes in rare event detection, joined LLNL in August 2015 as a postdoc and converted to a staff physicist in July 2017.

"It’s truly an honor for me to receive this DOE award," Xu said. "I am grateful to my colleagues — especially my mentor — at LLNL, without whom I could not have laid the groundwork for this project. I appreciate the platform LLNL has offered me to carry out experimental research and to access world-class talent and administrative support. I look forward to expanding the dark matter search programs at LLNL under this award."

Xu works on the direct search for dark matter interactions with noble liquid detectors. The concept of dark matter — the idea that a large fraction of our universe exists in a form we cannot see — has become a cornerstone of modern particle physics and cosmology, but the nature of dark matter remains unknown.

His approach aims to boost the capability of already world-leading xenon-based dark matter experiments by extending thte high-sensitivity dark matter searches to low energies near the quantum limit. "Successfully carrying out the proposed research can enable xenon ionization detectors to exploit their ultimate sensitivity to very weak dark matter interactions predicted by a variety of models, which may tell us what dark matter is — or is not," he said.

Xenon and other noble liquid detectors also show promise for demonstrating sensitivity to reactor antineutrinos through a Standard Model process known as coherent neutrino-nucleus scattering. The low energy signals generated during the coherent scatter process are quite similar to those expected to appear in dark matter interactions.  With further development, the highly sensitive detectors that Xu is working on may have relevance for nonproliferation applications such as reactor monitoring.

Mohror will use the funding for a five-year project entitled "I/O Workload Characterization for Performance and Portability," which will aim to streamline data management on high performance supercomputers to improve input/output performance and user experience.

"I’m still stunned," Mohror said of receiving the award. "I always feel like I/O and data movement problems don’t get the attention they deserve. Most people think about supercomputer performance in terms of FLOPs (floating point operations per second), which is a measure of how fast a supercomputer can compute a solution. However, day-to-day, the performance of scientific applications is often limited by how quickly I/O operations can complete. I’m really happy this project got chosen, because improvements in I/O performance can benefit all scientific applications."

Under the new project, Mohror plans to study current and future I/O workloads and identify "classes" of I/O use cases, such as checkpoint/restart and machine learning, which can be leveraged by I/O management systems to handle data requests in the best way possible without the user needing to be involved. As part of this project, she will organize the I/O use case classes into a structured I/O taxonomy and will evaluate the ability of I/O management system to utilize this taxonomy for improved performance and robustness. With this advanced workload characterization, Mohror said scientists will not need to know the details of a particular storage system in order to achieve high performance I/O and will be able to get their simulation results more quickly.

"The research is about identifying and characterizing I/O use case classes and then figuring out how to manage them, given the kind of storage systems we have today and what we expect in the future," Mohror said. "I/O is not terribly interesting to domain scientists who would rather focus on the scientific problems they are trying to solve, but HPC storage systems are getting more and more complex. Scientists don’t want to deal with that; they just want the I/O system to do the right thing with their data. Having this I/O taxonomy information would allow a system to manage the scientists’ data so they can get good performance, and the scientist can worry about the science and not the I/O."

Mohror, who leads the Data Analysis Group in CASC, has worked on I/O and checkpoint/restart problems since she began working at the Lab 10 years ago. She said the idea for the project has been "percolating" for several years, adding that she is excited to finally see it come to fruition.

To be eligible for the DOE award, a researcher must be a tenure-track assistant or associate professor at a U.S. academic institution or a full-time employee at a DOE national laboratory, who received a Ph.D. within the past 10 years. Research topics are required to fall within one of the Department's Office of Science's six major program offices: