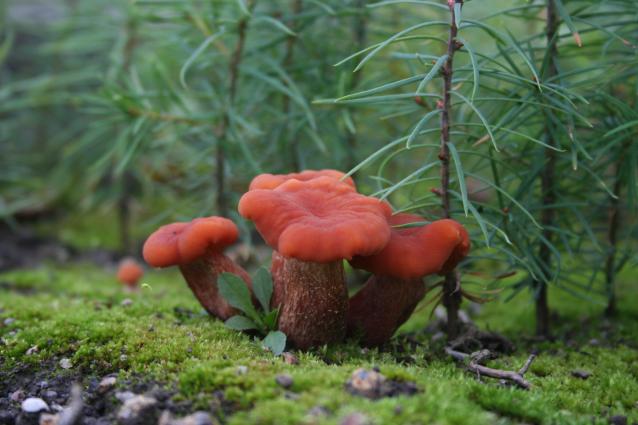 WALNUT CREEK, Calif. — The DNA sequence of Laccaria bicolor, a fungus that forms a beneficial symbiosis with trees and inhabits one of the most ecologically and commercially important microbial niches in North American and Eurasian forests, has been determined by the U.S. Department of Energy Joint Genome Institute (DOE JGI).

The complete Laccaria genome sequence was announced July 23 at the Fifth International Conference on Mycorrhiza in Granada, Spain, by an international consortium comprised of DOE JGI, Oak Ridge National Laboratory (ORNL), France’s National Institute for Agricultural Research (INRA), the University of Alabama in Huntsville (UAH), and Ghent University in Belgium, and additional groups in Germany, Sweden, and France.

"The Laccaria genome sequence will provide the global research community with a critical resource to develop faster-growing trees for producing more biomass that can be converted to fuels, and for trees capable of capturing more carbon from the atmosphere," said DOE JGI Director Eddy Rubin.

"The woody tissues of trees act as one of the world’s most important terrestrial sinks for CO2, making trees an important stabilizer of carbon in the earth’s environment," said Francis Martin, INRA’s Laccaria project leader. "The steady rise of global atmospheric CO2 concentrations suggests that we are on the trajectory for serious environmental problems. This situation could be eased by modeling and actively managing the complex relationships between trees and fungi," said Martin.

Key factors behind the ability of trees to generate large amounts of biomass or store carbon reside in the way that they interact with soil microbes known as mycorrhizal fungi, which excel at procuring necessary, but scarce, nutrients such as phosphate and nitrogen. When Laccaria bicolor partners with plant roots, a mycorrhizal root is created, resulting in a mutualistic relationship that significantly benefits both organisms. The fungus within the root is protected from competition with other soil microbes and gains preferential access to carbohydrates within the plant.

Such mycorrhizae are critical to terrestrial ecosystems, Martin said, since approximately 85 percent of all plant species, including trees, are dependent on such interactions to thrive. Mycorrhizae significantly improve photosynthetic carbon assimilation by plants and are estimated to fix more phosphate and nitrogen than the entire worldwide chemical fertilizer industry produces.

"The study and management of such relationships holds immense potential for the agriculture, forestry, and horticulture industries, as well as far-reaching implications for land management policies and the impact of global climate change on plants," said Gopi Podila of UAH.

"This unique research opportunity enables us to advance the understanding of how functional genomics of this symbiosis enhances biomass production and carbon management, particularly through the interaction with the poplar tree, also sequenced by DOE JGI," Rubin said. "We can now harness the interaction between these species and identify the factors involved in biomass production by characterizing the changes that occur between the two genomes as the tree and the fungus collaborate to generate biomass. It also helps us to understand the interaction between these two symbionts within the context of the changing global climate."

"Characterization of the interactions between poplarand its symbiotic associate, Laccaria bicolor , allows us to explore the coordinated response to environmental stressors, such as drought and extreme temperature, and other biological factors, providing a new dimension to climate change research and a step further toward mechanistic modeling of ecosystem responses," Rubin said.